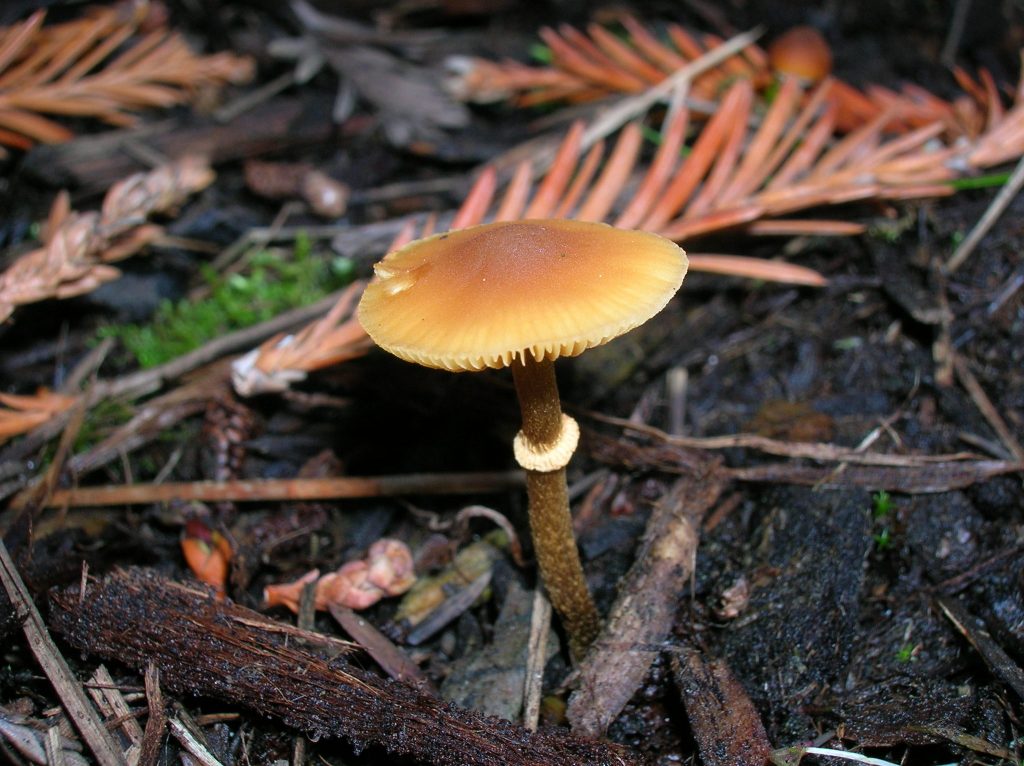 Pholiotina rugosa is a typical little brown mushroom (LBM) with brown gills, a slender, long stem, and a characteristic large ring midway down its stem.[i]

Although seemingly harmless, these little lawn mushrooms that are widely distributed in North America should be avoided as they are notoriously difficult to identify without employing microscopic characteristics and can be fatally poisonous if accidentally consumed.

Furthermore, the taxonomy of this species is quite confusing. It appears that the American mycologist Charles Horton Peck was the first to describe this species in 1898 under the name of Pholiota rugosa. However, the British mycologist Roy Watling reclassified this same species under the genus of Conocybe in 1981. Despite this, its morphology and recent molecular phylogenetic research favor the classification of this species under the genus of Pholiotina. Thus, one may come across this species as either “Pholiota rugosa” or as “Conocybe rugosa”. To make matters more confusing, these two names we have mentioned do not appear in most mycological field guides, rather this species appears under the name of either ”Conocybe filaris’’ or “Pholiotina filaris”. Now to queue more confusion, not all mycological sources view “filaris” and “rugosa” as the same species. As such, one may come across this species under four possible names and not all mycological text will treat the mushrooms listed under these four possible names as one species. For the purposes of this article, all four names refer to the same species.[ii]

As for etymology, the generic name “conocybe” is derived from two Latin roots, “cono” for conical and “cybe” for the head, thus meaning “conehead”. As for the “rugosa” epithet, this means wrinkled, which is a reference to this specie’s cap surface texture.

Cap: The cap of Pholiotina rugosa/Conocybe filaris measures 1 to 3 centimeters in diameter. While young, the cap is conical to convex in shape, but with maturity, it will flatten and may develop a central umbo. The color of the cap will vary from a lighter yellow-brown or orange-brown around the edges and a darker reddish-brown towards the center. The cap is also somewhat hygrophanous, fading in color and becoming pale when old and dry. The surface texture of the cap is quite variable, it may be smooth in some specimens or finely wrinkled in others. The margin of the cap is striate approximately halfway to the center.

The flesh of the cap is thin, approximately 1 to 2 millimeters thick, and watery brown in color.

Gills: This species has thin, moderately crowded, adnexed gills. Initially, the gills are pale cream-buff, but with age, as the spores mature, they turn a darker rusty brown. The gill faces are darker and the edges are paler. While young, the gills are covered by a whitish partial veil.

Stem: The stem of P. rugosa/C. filaris measures 20 to 35 millimeters long and 2 to 3 millimeters thick and is very fragile. The stem is mostly uniform in shape, except for a slightly swollen base and a characteristic persistent whitish to brownish, upward-flared ring. The stem is brownish in color and has a fibrillose surface texture.

Spores: The spores of this species are smooth, ellipsoid, and measure 8–9 by 5–6 micrometers. They have a moderately thick wall that measures approximately 0.5 µm as well as an apical germ pore. They also turn bright orange-brown when treated with potassium hydroxide (KOH).

Flavor and Edibility: This species is DEADLY POISONOUS and is NOT edible. Furthermore, the peptide toxins contained in this species are heat-stable and therefore resistant to elimination from grilling, boiling, frying, and steaming.

Habitat: Pholiotina rugosa/Conocybe filaris grows alone, scattered, gregarious, or clustered in both urban and woodland environments. It most frequently grows on lawns and landscaped areas near wood debris and compost.

Range:  This species can be found all over the world including Europe and Asia, but is most abundantly found in North America, particularly in temperate climates of Northeastern and Northwestern states (Upstate New York to Michigan and Northern California to Alaska).

The list of mushrooms that may look like Pholiotina rugosa/Conocybe filaris is potentially quite long as most mushrooms that fall under the category of little brown mushrooms (LBM) are similar enough to cause confusion. Thus majority of species from the genera of Conocybe, Agrocybe, and Tubaria can reasonably be mixed up with P. rugosa/C. filaris. The resemblance among these species is concerning as they cannot be reliably told apart based on macromorphological characteristics, and require the use of microscopy for definitive identification. As such it is all-together best to avoid experimenting with all little brown mushrooms (LBM) unless one is absolutely positive that they are edible.

P. rugosa/C. filaris can also be confused for Galerina species, for example with Galerina marginata. The growth habitat is a helpful differentiating factor between these two genera. Galerinas tend to grow on moss-covered fallen logs, whereas Pholiotina rugosa is terrestrial, growing directly on the ground.

Toxicity, Safety, and Side Effects[vii]

As previously mentioned, Pholiotina rugosa/Conocybe filaris is highly poisonous as it is the only one of its genus to contain lethal Amatoxins. Amatoxins are the same toxic compounds that are more commonly found in mushrooms from the genera of Amanita, Galerina, and Lepiota.

Amatoxins are peptide toxins that have particular affinity towards damaging the cells of the liver and kidneys by inhibiting cellular replication and altering normal cellular structure and function. The signs and symptoms of Amatoxin poisoning usually occur within the first several hours after ingestion of P. rugosa/C. filaris and follow a triphasic pattern of progression.

The first phase usually occurs within 10 to 14 hours, but may be delayed for up to 24 hours. During this phase, gastrointestinal symptoms predominate. These symptoms most commonly include nausea, vomiting, sharp abdominal pain, diarrhea often with blood and mucus, and hypovolemic shock due to dehydration.

The final phase is the most dangerous of the three phases and usually appears 72 hours after P. rugosa/C. filaris ingestion, but as mentioned previously can be delayed for up to four days. During this phase, individuals experience worsened gastrointestinal symptoms; symptoms and signs of liver failure such as bleeding from the nose, vomiting of blood, blood in urine and stool, as well as hepatic encephalopathy manifested by muscle twitching, altered sensorium, seizures, and even coma.

The final outcome of untreated or inadequately treated amatoxin poisoning is death which usually occurs within seven to ten days as a result of irreparable liver, kidney, or heart damage and failure. Mortality rates in adults range from 20 to 30%, while children have mortality rates above 50%.