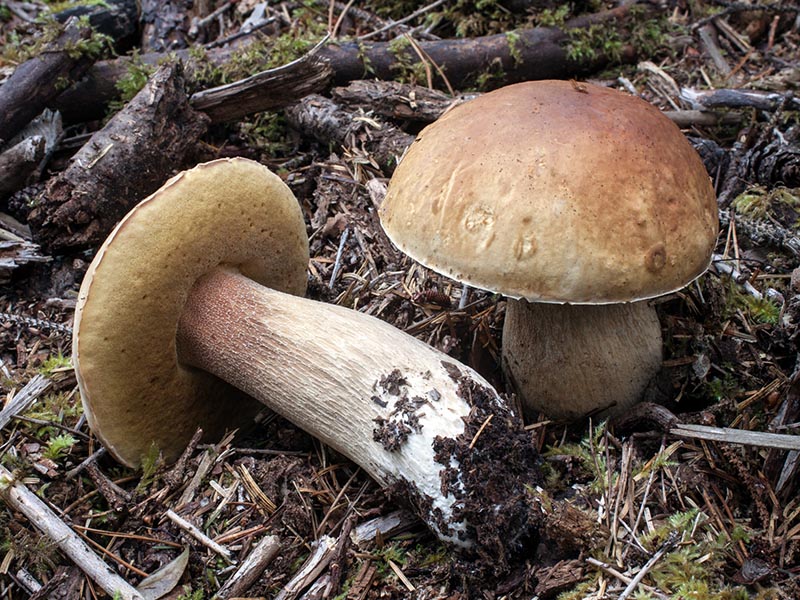 The king bolete[i] (Boletus edulis), also called penny bun, ceps or porcini, is a popular edible mushroom native to Europe. The “king bolete” name also applies to a number of very similar, and also edible, North American mushrooms, but these appear to be different species. The exact taxonomy of the group is still unclear.

King boletes are large, stocky mushrooms with pores, rather than gills—they are quite literally typical boletes, being the officially designated type species of the genus. They (and their North American look-alikes) are prized by mushroom-eating enthusiasts and have been used in folk medicine to treat a variety of complaints, including lumbago and tendon problems[ii]. Unfortunately, while the species does have at least some medicinal potential, its traditional uses have not been confirmed by research.

Cap:  Thick and often quite large. Curved when young, becoming flat-topped. Light to reddish brown. The flesh is white and does not stain or bruise, with a very dense texture that becomes softer and spongier with age.

Pore surface:  Finely textured, hard, and white at first, becoming yellowish, then green, then greenish brown and soft with age.

Stem: Wider near the bottom than the top, especially when young, and very thick. Whitish to reddish brown in color, usually with a raised, netlike color pattern especially near the top.

Habitat: Grows in association with several tree species, mostly conifers, and fruits from the ground near their roots.

King boletes[iii] are large, often swollen-looking mushrooms, although they can be difficult to find in the wild as the fruiting bodies often remain hidden under forest duff. They are micorrhizal fungi, meaning that they have a mutually beneficial relationship with certain trees; the fungal hyphae tap into the tree roots and pass water and soil nutrients—more than the tree could gather alone—to the tree in exchange for a share of the sugars the tree makes through photosynthesis. Unlike fungi that attack and parasitize or kill trees, micorrhizal fungi don’t have to develop specialized mechanisms for defeating the plant’s defenses and can therefor grow in association with many species. The king fruits in the fall, as do some of its look-alikes. Some look-alikes fruit in the summer.

The primary health benefit of eating king bolete is nutritional; like many mushrooms, they have no cholesterol or fat and are low in calories. The king bolete is a good source of protein, and is an excellent source of both dietary fiber and iron[iv]. It is also a good source of some minerals, such as selenium, manganese, and zinc, as well as B-complex vitamins[v]. While king boletes are generally a good source of antioxidants, their antioxidant and vitamin profiles tend to degrade somewhat if stored too long[vi]. Given the flavor, which is improved and intensified by drying[vii], this is a health food people want to eat.

Extracts of the mushroom have been shown to kill colon cancer cells, but not normal colon cells, in cell cultures[viii]. The extract therefore has therapeutic potential but has not yet been tested in living subjects, nor has eating the whole mushroom been shown to effectively treat cancer.

Another extract from king bolete reduced inflammation in mice who had been made asthmatic, and therefor has potential as a treatment for asthma[ix].

Whole king bolete is not generally used for any modern therapeutic purpose; the mushroom, or powders made from the mushroom, are sold for their flavor.

Because the king bolete is not currently being used as a medicine, questions of dosage are not relevant. The mushroom can be eaten freely by most people.

Boletus edulis Side Effects and Toxicity

King bolete is generally considered safe, though some individuals may have allergies or hypersensitivities (the same is true of all foods). Foragers do need to exercise caution, for while most look-alikes are edible, some are unpalatable or even dangerous[x]. Although some writers insist kings can be eaten raw, others insist that the raw mushroom can cause stomach upset and should always be cooked[xi].