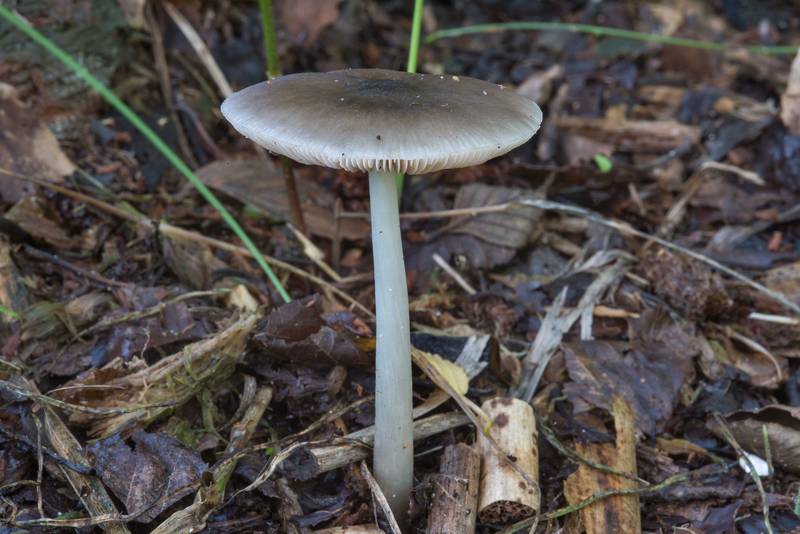 Pluteus salicinus aka The Willow Shield[i] is an exclusively European species though, as is often the case, it has an American look-alike that was, until recently, thought to be the same species[ii]. And, again, as is often the case, many people are unaware that the distinction has been made, meaning it is often difficult to tell which mushroom a writer meant and how similar or different the two species really are.

At least some Willow Shields are psychoactive, but it’s unclear whether they all are. If you are looking for an ordinary meal, it is better to not eat willow shield as it might be psychoactive (remember that although many people enjoy using psilocybin and find it valuable, an unexpected trip would be unpleasant and possibly dangerous). However, if a trip is what you want, this species may not be the most reliable place to look for a ticket.

Still, it is a pretty mushroom, and worth knowing about.

Shield mushrooms[iii] as a group are fairly distinctive in that they eat wood, have pink or pinkish-brown spores, and lack a volva, a combination true of very little else. However, determining which shield you’ve got for sure usually requires a microscope. That this one sometimes bruises blue is generally a good indication, but may not be consistent.

Cap: Small to medium-sized, bell-shaped when young, becoming flatter, but often retaining a slight bump in the middle, gray to grayish-brown, sometimes bluish.
Gills: Free from the stem, white when young, becoming pinkish as the spores mature.
Stem: Long, thin, never hollow. White, but sometimes able to bruise blue-green.
Spores: Almost but not quite spherical, smooth, pale pink to pinkish-brown.
Habitat: Eats dead hardwoods, especially willow and, to a lesser extent, alder. Fruits in summer and autumn, so long as the weather remains mild.

Willow shield looks a lot like several other shield mushrooms, including those of the Deer Mushroom species complex. In most cases, there are at least some subtle, non-micropscopic differences, and few, if any, are dangerous to eat. The resemblance to Pluteus americanus is, as mentioned, so close that they were thought to be the same thing, but the ranges of the two do not overlap.

The resemblance to Deadly Galerina and other scary things is slight and superficial, but could cause a problem for anyone not paying close attention. Please pay close attention.

There is little to no published information on what using the willow shield is like. Trip reports for its American cousin have been published, but it’s hard to say whether the two species are similar in this respect. Since willow shield owes whatever psychoactivity it has to psilocybin, one can expect, broadly, a psilocybin trip. That is, altered thought patterns, intensified (often enjoyable) emotions, and, at higher doses, hallucinations, plus a risk of nausea, vomiting, anxiety, or, rarely, more serious side effects.

Psilocybin isn’t risk-free, but as long as users respect the substance and take certain basic precautions, the risk can be minimized.

Accounts differ. But most likely, willow shield varies from not active at all to moderately active, but if there is any way to tell what the potency of a given specimen might be without eating it, the information is difficult to find.

You can use our Magic Mushroom Dosage calculator to calculate the dosage you want.

If anyone is cultivating this species, they aren’t posting about it much. Basic information (colonization time, incubation temperature, method) is not forthcoming. Part of the problem may be that Willow Shield requires well-rotted wood, something difficult to provide in a controlled growing environment.

Spores and kits appear to be available for purchase, but whether they are really P. salicinus or simply mislabeled P. americanus is unclear. Given how little buzz there seems to be about either growing or using willow shield, it might be best to approach any commercial exchange with caution—since psilocybin in any form is illegal in most jurisdictions, buying magic mushrooms has no recourse if the product ends up being completely different than what was advertised.