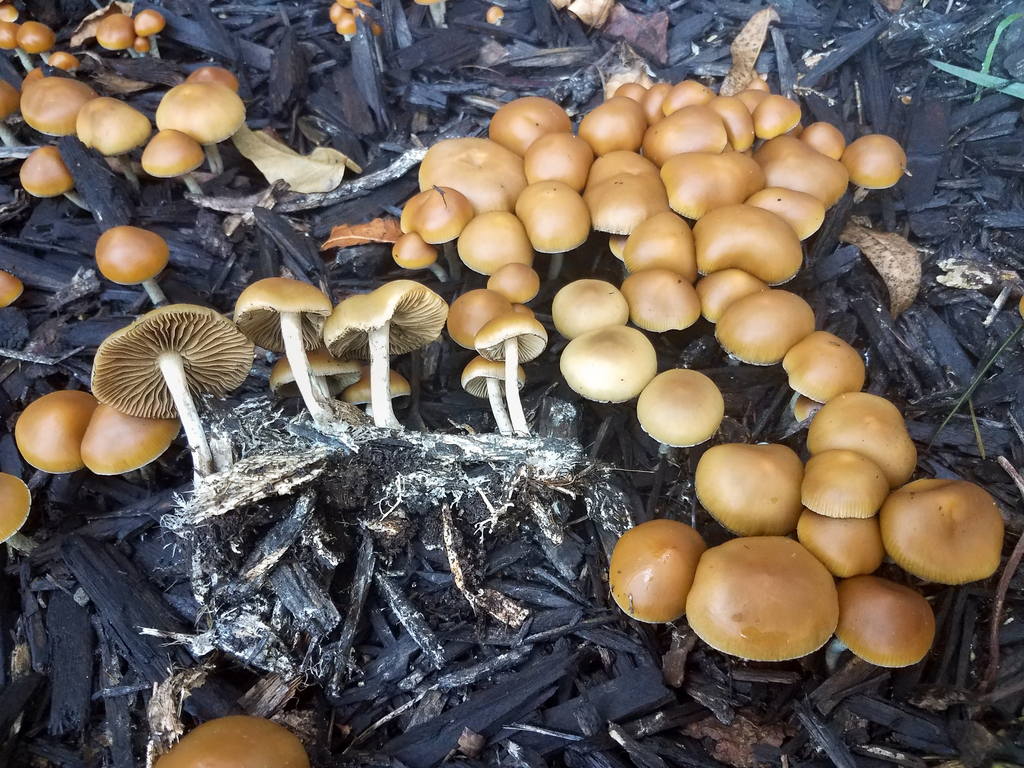 This[i] is the species that for years was known as Psilocybe cyanofriscosa, an unofficial name applied, somewhat playfully, to what was then considered a variant of Psilocybe cyanescens common around the city of San Francisco. Only in 2012 did it receive a scientific name of its own and full species status, largely thanks to a mycologist named John Allen, who more or less forced his colleagues to figure out what the heck this odd mushroom was. When they realized it was, indeed, a new species, they named it after him.

The two species really are nearly identical, even on a microscopic level. The most obvious difference is that while P. cyanescens has a remarkably wavy cap in maturity, the cap of P. allenii remains even[ii]. Also, although the two begin fruiting at around the same time, P. allenii has a much shorter fruiting season. Generally, it’s easier to tell that something is not P. allenii—if a mushroom is fruiting singly, is more than 100 miles from the Pacific Coast of the United States or has a wavy cap, then it is P. cyanescens. Otherwise, it’s hard to be sure which of the two it is.

And yet, there is something subtly distinctive about the mushroom. P. allenii may be a species new to science, but mycophiles have been talking about it for more than twenty years.

P. Allenii[iii] is a very classic-looking little brown mushroom, though something about it looks cheerful.

Cap: Can be anywhere from two to four and a half centimeters across. Is more or less bell-shaped, without a bump in the center or any marked waviness of the edges. When moist, the upper surface is sticky to slimy and light, possibly orangish brown. Dry specimens fade to yellowish-brown or buff. Bruises blue.

Gills: Attached but narrowly so. Pale, reddish brown when young, aging to dark gray-brown with mottling. The edges are paler than the faces.

Habitat: Eats wood, and is often found fruiting from mulch and wood-chips. Presumably it also has a natural habitat, but nobody yet knows what it is. It has never been found and identified outside of urban or suburban areas. It is common within 50 miles of the Pacific Coast, especially around San Francisco, California. They are never found more than 100 miles from the coast. They fruit in larger groups in the autumn and winter, but not in the spring or summer.

P. alleni looks, most obviously, like P. cyanescens, but most Psilocybes are similar. What is a more serious problem is that as little, brown mushrooms (“LBMs”), these bear at least a superficial resemblance to a huge number of other little, brown or brownish mushrooms, some of which are dangerously poisonous. The Deadly Galerina (Galerina marginata) is a particularly scary look-alike in that not only does it kill most of those who eat it, but is also fruits from wood, just like P. allenii. There is a potential for the two to fruit in mixed clumps. People have died this way.

The combination of purple-black spores and blue bruising is distinctive of both Psilocybes and the psychoactive Panaeolus species—Deadly Galerina has rusty-brown spores. It’s not that LBMs are impossible to identify properly. It’s that they must be identified, with careful attention paid to all pertinent details. “This looks right” isn’t good enough.

There isn’t much information available publicly on what a P. allenii trip is like, but is is likely very similar to those of other Psilocybes—the effects of these species are largely those of psilocybin.

Psilocybin causes changes in perception, thought-pattern, and emotion. The changes in perception—hallucinations, in other words—get a lot of attention from people who have never used psilocybin, to the point that they often refer to the substance simply as a hallucinogen, ignoring all the other things psilocybin does. Actually, at very low doses, there are no hallucinations, and they remain fairly subtle except at very high doses. Although seeing weird stuff has a certain novelty factor, it’s not the main reason people use psilocybin.

People use psilocybin because “altered thought-patterns” can mean important personal and spiritual insights. “Altered emotions” can mean deep feelings of euphoria and connectedness—or it can also mean crippling anxiety—an oddity of psilocybin is that it seems to enhance whatever mental state the user has going in, for better or worse.

If these mushrooms are treated with respect and caution, they can be a relatively safe tool for exploring the mind. Treated as mere toys and diversions, they can cause real problems.

Some people claim that P. allenii is extremely potent, but there is really very little hard evidence on the subject. It’s likely that potency varies a great deal, as that of related mushroom species does. One way to set a proper dose size is to dry and then powder a large batch of mushrooms and mix the powder up. Then take a small dose of the powder to find out how potent the mixed batch is, and then measure doses accordingly.

P. allenii is sometimes cultivated and kits are available, but information sources differ on what methods are best. Some insist that the same methods used for most other Psilocybes will work, while others insist that P. allenii will not fruit on a grain substrate—this species needs wood, and will do well in outdoor mulch beds or similar set-ups. Given this rather significant lack of information, details such as colonization time must likewise remain unclear.

You can grow P. allenii, but you could also probably buy some. Either option is extremely illegal in most jurisdictions—curiously, psilocybin has been decriminalized across much of P. Allenii’s range, but not across all of it, and decriminalization is not quite the same as legalization[iv]. In any case, if you want to try this mushroom anyway, which option you choose will depend on the details of the law where you live, who your potential seller is, and how you want to use the mushroom.

You could also harvest the mushrooms wild, but please don’t unless you are very experienced with mushroom identification. Remember what we said about the Deadly Galerina.

Growing is almost always cheaper per dose—the set-up costs can be significant, but you also get a large harvest. In areas where possession of psilocybin has not yet been decriminalized, growing your own is also more discrete, especially in states where spores (which do not contain psilocybin) are legal to buy. But not everybody wants a large supply, and growing can carry much higher legal penalties than simple possession of a dose or two does.

Buying means you get a dose or two now (not thirty doses three months from now). It is a convenient option for occasional users, microdoses, or people who want to try a different kind of mushroom every time. But buying does have some drawbacks. Perhaps most seriously, there is no assurance of quality—the buyer has no legal recourse if the product is old lacking on potency, or even a completely different kind of mushroom. Buying should only be considered an option if the seller is known to be absolutely reliable.