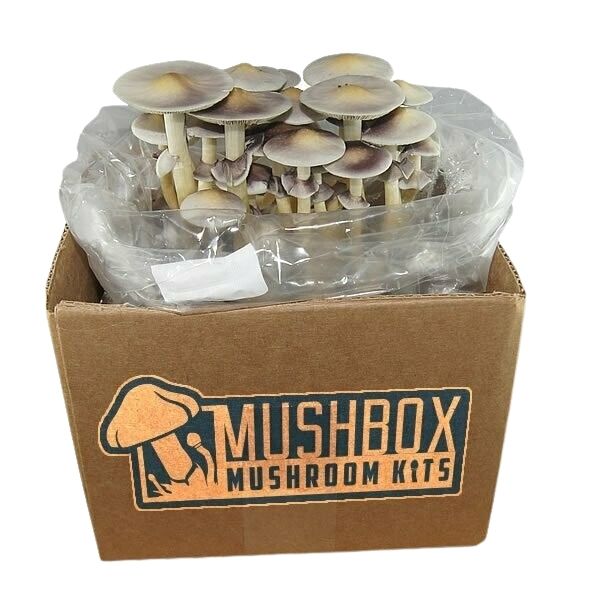 Choosing a Magic Mushroom Grow kit is difficult, as there are lots of ways to grow magic mushrooms, and most of them are fairly straight-forward, requiring very little in the way of specialized equipment or expensive supplies—but there is a learning curve, and even the simpler methods require taking multiple steps over multiple weeks, and everything must be done correctly or the grow will likely fail. That’s a lot, when you don’t even know if you’ll enjoy mushroom cultivation yet.

You might not even know if you like mushrooms. Buying mushrooms can be difficult (do not even consider harvesting wild ones; magic mushrooms share their habitat with a close look-alike that will, no exaggeration, kill you), so many people find that growing their own is much more practical. And if you don’t know yet if you’ll even like using these mushrooms, you’re probably a little reluctant to start studying mycology and buying whole bricks of coco coir just yet.

Grow kits typically contain everything you need to grow mushrooms except the spores (which you may have to buy separately) and water. They come with instructions, and some even come with the opportunity to talk with an expert grower live. While success can’t be guaranteed, with the better kits the odds are really very good, and the whole process is simple and streamlined.

Most commonly-cultivated mushrooms are available in kits. Magic mushrooms are no different in that respect. Where these kits are categorically distinct is that using them is illegal in many jurisdictions. The companies that make the kits stay within the law in a variety of ways. For example, kits produced in the United States don’t contain any fungal tissue—they’re just jars or bags of substrate, which is quite innocent. In most states (not all), the spores are also legal to buy (for purposes of scientific study only, of course). The crime only occurs when somebody puts the spores in the kit and adds water….

The point is to know what the law is in your area and do not get arrested.

Not all kits work for all mushrooms. If the kit isn’t appropriate for the spores you have, you aren’t likely to get much of a harvest. Fortunately, many kits are designed specifically for one or another kind of mushroom, so it’s not difficult to figure out which one you need. Companies producing kits designed for illegal crops will, of course, be slightly cagey about the fact, but they will usually recommend places to buy spores, and you can always ask the spore supplier what kind is best for what kit.

But before you choose your kit, you’ll need to choose your mushroom, since not all magic mushrooms are alike to use. “Magic mushroom” generally refers to one or another of the species containing psilocybin, but potency varies tremendously from species to species, and there may be other psychoactive substances as well, and these alter the style or mood of the trip. So your first step is to decide what kind of mushroom you want. After that, you can choose a suitable kit.

Unfortunately, many writers use the words “species” and “strain” and “variety” interchangeably. Actually, these words mean very different things. Strains and varieties are basically breeds—Psilocybe cubensis, possibly the most popular magic mushroom and the most widely cultivated, comes in a great many strains with picturesque names like “Golden Teacher” and “Penis Envy,” but they are still all Psilocybe cubensis, just like a husky and a beagle are both dogs. Then there are other species of mushroom—they’re the equivalent of coyotes or even foxes. So, when you choose your mushroom, make sure you know its species, as well as its variety.

All of the following are well-regarded, so while they are not necessarily “the best” in a literal way (and really, isn’t one best option for everybody, since not everybody has the same needs and tastes), but they are up there.

They do all appear to be for Psilocybe cubensis, though some may be suitable for other species, too. 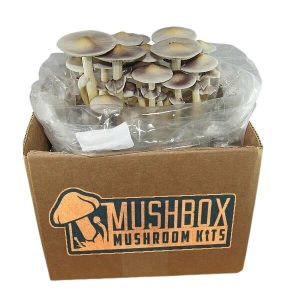 The Mushbox is my favorite grow kit. It’s a great way to get started for beginners.

Not only that but it comes with everything you need, including spores. Some of the other kits below only come with half of what is needed.

It’s probably the most simple kit to use here, and its’ effective.

Its done in 6 simple steps.

How easy is that?

You can get the Mushbox here at Myco. 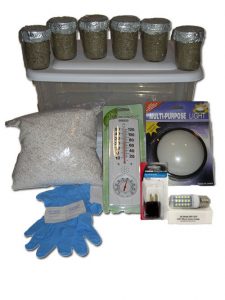 Midwest Grow Kits is a subset of Midwest Organics[iv], a supplier of substrate, equipment, and related materials to both commercial and hobbyist mushroom growers. They have a full product line, including various types of equipment and supplies sold individually and a range of kits. The smallest and simplest costs about $50, while the largest and most elaborate is over $400 and designed for modestly commercial-scale harvests. They sell mushroom drying kits, too.

The simplest and most affordable of this company’s offerings is appropriately named the “Simple Mushroom Grow Kit.” It is all-inclusive (except the spores) and comes with six filled and sterilized half-pint jars and everything necessary to have a good harvest—including a guidebook. The website includes a helpful chat feature. Although the website says the kit is perfect for “edible and exotic mushrooms,” this is clearly PF Tek in a kit, meaning it’s once again for P. cubensis.

You can get the Simple Mushroom Grow Kit here at Midwest Grow Kits.

Third Wave[ii] is a Public Benefit Company dedicated to fostering the use of psychedelics for health and personal growth. Primarily, they engage in education.

Third Wave’s grow kit prides itself on having “everything you need but the spores.” That’s pretty much correct; it even includes sterile alcohol swabs. A written manual and instructional videos walk you through the process of growing your own mushrooms. The kit is quite small—able to fit in a drawer—which means yields will be relatively low, but small size is a selling point for people who need to keep their mushroom-growing discrete.

The website doesn’t say anything about what kind of mushrooms the kit is designed to grow—of course the company is trying to make it not entirely obvious that the intended crop is illegal in many jurisdictions. It does recommend a spore supplier who can presumably help with choosing something appropriate.

You can get Third Waves Grow kit Here

PsiloBloom[iii] is a partnership dedicated to the use of psychedelics, including but not limited to mushrooms, for psychological healing and personal exploration. They sell journals and cultivation kits and provide information on microdosing.

PsiloBloom’s kit has the catchy name, Cultiv8. It is mostly inclusive (it doesn’t include alcohol swabs, but you probably have those at home already) and comes with a two-part written manual. For a little more money, you also get a one-on-one Zoom call with a mushroom-growing expert able to trouble-shoot whatever problems may arise with your grow.

Of course, the kit does not include spores, but while the website does not say what species the kit is designed for, it does provide the website of a spore supplier—and the supplier sells Psilocybe cubensis (along with at least two species of culinary mushrooms).

The kit is only for sale in the United States.

Ancient Path Naturals[v] sells mushroom-growing supplies, grow kits, and spores—though the company does not appear to sell magic mushroom spores, only culinary varieties. That the kits are intended to grow the magic kind is obvious, however. Some of the kits are illustrated with a picture of P. cubensis. One of the kits is called the “Almost Magic Mushroom Grow Kit,” as though those not in the know are supposed to believe the name refers to the nearly-magical grow kit, not the nature of the mushroom.  The website even reminds customers that the grow-bags work for multiple P. cubensis strains. Not very subtle.

The company’s grow kits seem to differ from each other largely in size and price, though it’s a little hard to tell as the website doesn’t describe the contents of the kits except in a very general way. They are advertised as being very fast to colonize, and as producing large harvests. If they come with instructions, the website doesn’t mention it. The most-affordable offering of the line is about $40.