A monotub is a particular kind of mushroom fruiting chamber. It’s basically a box that holds bulk substrate, as opposed to a dub-tub, which is a bulk substrate box that is twice as tall (because it used a second, upside-down tub as a lid), or certain other fruiting chambers that are designed for cakes rather than bulk. Usually, the grower has to do some fiddling during the grow to keep the fruiting chamber in the right range for temperature, humidity, and oxygen concentration, otherwise the fungus won’t fruit well.

An automated monotub is simply a fruiting chamber that fiddles itself.

The reason some growers like automated monotubs is two-fold (three, if you consider that some folks simply like building things). First, once the tub is set up, nothing more needs to be done until harvest. That appeals to the lazy (hey, who are we to judge?), the too-busy (again, no judgment!), and people planning to go on vacation for the next two weeks (lucky so-and-so). But the other appeal is that—in theory—an automated tub can get growing conditions perfect, resulting in a better crop than we flawed humans can manage on our own.

Whether automated monotubs really work as their proponents say they do is a matter of some debate. In fact, there are major disagreements among users as to what, exactly, an automated monotub should be automated to do, with champions of each method making dire predictions as to the success (or, rather, lack thereof) of the others.

We’re not in a position to resolve the dispute, so instead of picking a side ourselves, we’re just going to tell you about the diversity of options that is the automated monotub design[i][ii].

In order to understand the below designs please read our Monotub article as these are additions to what is already included in that article. We will not go over the basic monotub designs like the polyfill and substrate that is already covered in the original article. Some automated monotub designs involve a mister and a fan and possibly a heating element, too.  Each is on a timer or, better yet, sensors (a hygrometer, a thermometer, and so forth). Such designs allow the maximum of fiddling without much effort on the part of the grower, and without any need to open the lid and risk contamination—the fan pulls fresh air in through a filter. 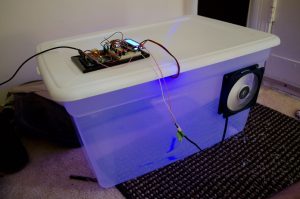 While some growers say regular misting is necessary for mushroom production, others insist it is not needed and may even be counterproductive, since it is the evaporation of water that triggers fruiting. They advocate very minimal misting or none at all. So some automated monotub designs lack a mister. Others lack a fa and have only a mister. Go figure. 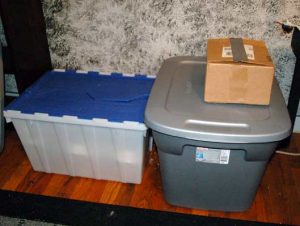 Most people use automated tubs because they want convenience or precision, but automation can also be used for security. It’s true that a lot of at-home mushroom cultivation involves a crop that is illegal in most jurisdictions. Growers who want to stay out of prison need to keep their activities secret, and for some that means hiding the fruiting chamber—putting it inside something else, such as in a cardboard box, is one option. But how is the fungus going to get light and air if it’s closed up in a box? Regularly opening a stealth box isn’t very stealthy.

An automated chamber is one option[iii].

Note that mushrooms don’t need a lot of light. Unlike plants, fungi don’t need light to grow at all, a good thing, since they mostly grow inside their food source, where no light can penetrate. But they do need to know the difference between the outside and the inside, so they don’t accidentally try to fruit underground—that would prevent spore dispersal. So they use light to tell them where the outside is, so they know where to put their mushrooms. A stealth box therefore doesn’t need grow-lights, just a few LEDs so the fungus knows where to fruit.

A stealth box has to be self-contained, and it has to be silent—meaning the fan can’t whir. These are design considerations other automated monotub-makers don’t have to deal with.

If you want to add a mister and humidity sensor (optional):

A major part of the draw of an automated monotub is that you don’t have to open the chamber mid-grow—but there are non-automated teks, including monotub teks, that don’t involve opening, either. It’s possible that automation results in a higher success rate or higher yields, but we have not seen the figures. It may be that “to automate or not to automate” is, like “to mist or not to mist,” a place where growers disagree.

How to Use an Automated Monotub

The whole point of an automated monotub is that you don’t have to do anything to it during a run—but setting up the run is a little more involved. Not only do you need to clean the tub, then mix and hydrate the substrate and mix in spawn, just as with any other monotub, but you also need to check all the equipment to make sure it’s in good, working order, fill the reservoir of the mister, if there is one, and set all the various timers and thermostats and so forth. None of this is especially difficult, although deciding exactly what the settings should be might be nerve-wracking for a particular kind of perfectionist.

Building an automated monotub makes an interesting DIY project for someone who is at least moderately handy and understands how to hook multiple electronic components together. For everyone else, automated monotubs are available for sale online. These are hand-made products, for the most part, not mass-produced, but they allow even slightly less-handy growers to get into automated growing.

It’s true that an automated set-up is a more-involved, more-challenging build than a non-automated system. These monotubs are not labor-saving devices; they are labor-moving devices, able to shift the work normally done during the grow over to the build and the set-up. Then you can take a vacation and come home to mushrooms ready to harvest.