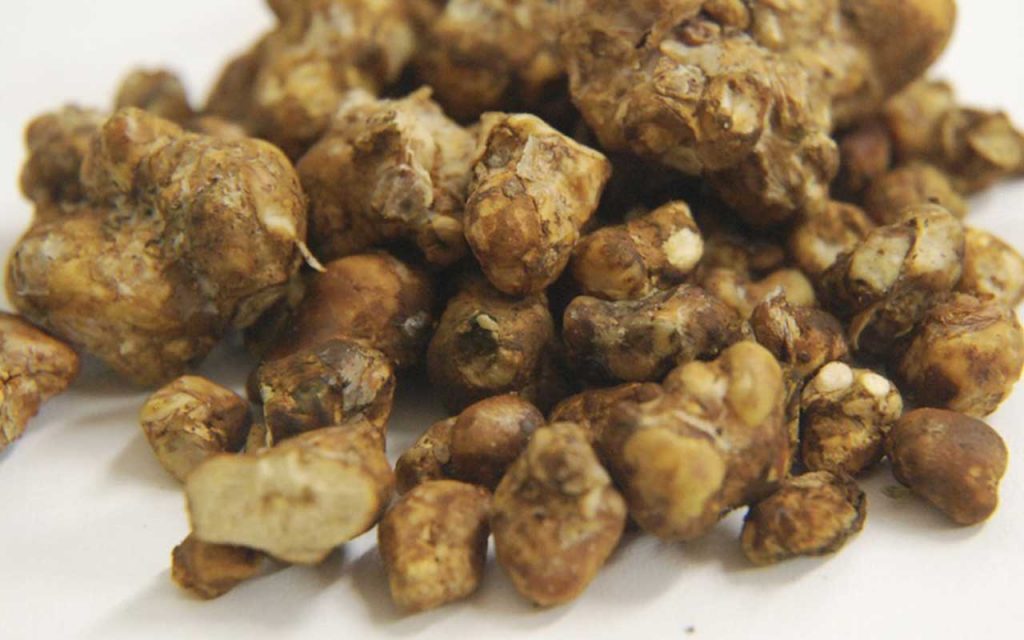 “Magic” truffles aren’t truffles[i]. Whether they are really magic is another topic yet again. And although they are often discussed as though they were a single thing, there are actually at least two distinct species.

Strictly speaking, a truffle is the fruiting body of any fungus in the genus, Tuber[ii]. These are something like underground puffballs, although the interior spore mass is hard, not soft or powdery. Truffles have no way of ejecting their spores, so they depend on animals to eat them and then excrete the spores, nicely fertilized. That truffles smell and taste amazing is not an accident—they are trying to attract eaters. There are also other, unrelated genera that produce similar fruiting bodies (though these are usually softer) and pursue a similar strategy of spore dispersal[iii]. These are usually referred to as false truffles, perhaps because humans don’t usually find them appetizing.

In contrast, psilocybin truffles (or, sometimes “stones”) are not fruiting bodies. The technical term for the structures is sclerotia (singular: sclerotium), and they are produced by many kinds of fungi, usually as a way for the fungus to survive a dormant period, though there may be other reasons for sclerotium formation as well[iv]. Just as with mushrooms, some sclerotia are safe to eat and some are very much not. The species that produce psychoactive sclerotia belong to the genus, Psilocybe and also produce psychoactive mushrooms. Potency varies between species. Accounts differ as to whether stones are typically more or less potent than mushrooms produced by the same species. As always, it’s important for users to know what they are taking in order to understand what a safe and effective dose might be.

Unfortunately, taxonomy among psychoactive stone-producers is, to put it mildly, confusing[v]. Several named species appear to actually be subspecies or synonyms of other species, plus there are several cultivated strains whose identity is either unknown or routinely misnamed. For example, many cultivated strains are referred to as “Psilocybe galindoi,” (or “galindii”), but this might not be a valid scientific name and the material referred to this way may include multiple species.

The two valid species known to be involved in stone production are P. mexicana and P. tampanensis.

The effects of using magic truffles or stones is the same as those of eating mushrooms of the same species—which is roughly the same as for Psilocybe mushrooms generally. There are certainly those who claim differences in the quality of the high, but these claims are debatable. The most important variable is potency, but that variation can be adjusted for by changing the dose.

Although the hallucinogenic nature of psilocybin gets most of the attention among non-users, psychonauts themselves seem to value other effects more—a typical trip includes both euphoria and altered thought patterns, and these thought patterns can include valuable personal and spiritual insights. Psilocybin use can, at least according to anecdotal reports, calm anxiety and lift depression (there are claims for other medical benefits as well, though there has been very little clinical research). On the other hand, the most commonly-reported serious negative effect is anxiety—it’s possible to get thoroughly terrified by psilocybin. Some people say the substance simply enhances whatever’s going on in the user’s mind at the time, so taking truffles while in a bad headspace could make everything much worse.

Non-mental effects tend to be pretty minimal and include nausea (rarely vomiting) and excessive yawning. But rare, very serious side effects, such as convulsions, are possible.

Magic truffle use is relatively safe, as ways to get mentally altered go, but it is not absolutely safe. The same precautions apply as for any other psilocybin source: always err on the side of taking too little rather than too much; always take care to be in a safe, supportive environment and to be mentally prepared; never trip alone without a sober baby-sitter; and be sure to process and integrate the experience afterwards.

Published sources differ so wildly on the potency of truffles that it would be irresponsible to give a single, authoritative answer. Some people claim truffles are much less potent than mushrooms, others claim there is no difference, and a few claim that truffles are actually more potent.

At least part of the confusion is doubtless due to the fact that much online content is produced by people with no background in their subject matter. Some are careful to adhere closely to what reliable sources say, and to decline to give out information they are unsure of. Some are not so careful.

Another problem may have to do with definitions. Most articles on the subject simply compare “truffles” to “mushrooms,” without mentioning the species or whether the material is fresh or dried. So are these comparisons between, say, P. cubensis mushrooms and P. tampanensis stones? And since fresh truffles have a much lower water content than fresh mushrooms do, the per-gram potency of truffles doesn’t change that much between the fresh and dried state, whereas the potency of mushrooms changes radically when dried.

The bottom line is that users should get accurate information about the particular product they are using (species, strain, growing conditions, and fresh-or-dried status) before deciding on dosage.

Growing magic truffles is very similar to growing magic mushrooms—after all, it is the same fungus. The main difference is that it’s not necessary to trigger fruiting. All it takes is allowing the mycelium to colonize the substrate, and then waiting. Today growing time (including colonization time) is about four or five months.

Growing kits are available for magic truffles, or growers can obtain spores or mycelium and inoculate the growth medium themselves.

One popular method[vi] uses either grass seed or rye grain in a grow back with a filter. The substrate must be fully hydrated and sterilized, then allowed to cool, before being inoculated. As with any cultivation of fungus, it is critical to avoid contamination until the substrate is fully colonized and able to defend itself. Unlike with gardens of plants, the weeds that cause problems for mushroom- or truffle-growers (bacteria or other fungi) can’t be pulled out once they establish. It’s either prevent them from entering in the first place, or lose the whole batch.

The grow bag must be kept between 21-25 degrees Celsius (that’s 70-77 degrees Fahrenheit) in the dark. The bag should be shaken at the beginning and then periodically to help spread the mycelium throughout the substrate. Colonization time is anywhere from two to four weeks. After colonization is complete, simply do nothing—no more shaking—and leave the bag in its warm, dark place for three or four months. The larger the bag sits, the larger the truffles will be.

Magic truffles can also be purchased[vii]. Growing at home is a fascinating and enjoyable hobby, while buying stones is much faster—for someone who only wants one or two doses, not a year’s supply, buying is the better option.

But the law is very much part of the decision. In many jurisdictions across the world, psilocybin in any form is illegal. Penalties can be severe. Users have two choices: go somewhere that has psilocybin-friendly laws, or break the law and risk prison. Persons choosing the latter option need to consider their own security while pursuing truffles.

Growing mushrooms or truffles may count as manufacturing an illegal drug and is likely to leave the grower with a large supply on hand, a dire situation from a legal standpoint. However, there are many jurisdictions where although magic truffles are illegal, the spores necessary to grow truffles are not—they do not contain psilocybin unless they germinate. That means it is not necessary to break the law to set up truffle cultivation. It’s not necessary to make an illegal purchase. Keeping the whole process secret may thus be somewhat easier.

Curiously, there are places where psilocybin mushrooms are illegal but psilocybin truffles are not—chiefly Holland makes such a distinction. Not breaking the law in the first place is by far the best option.