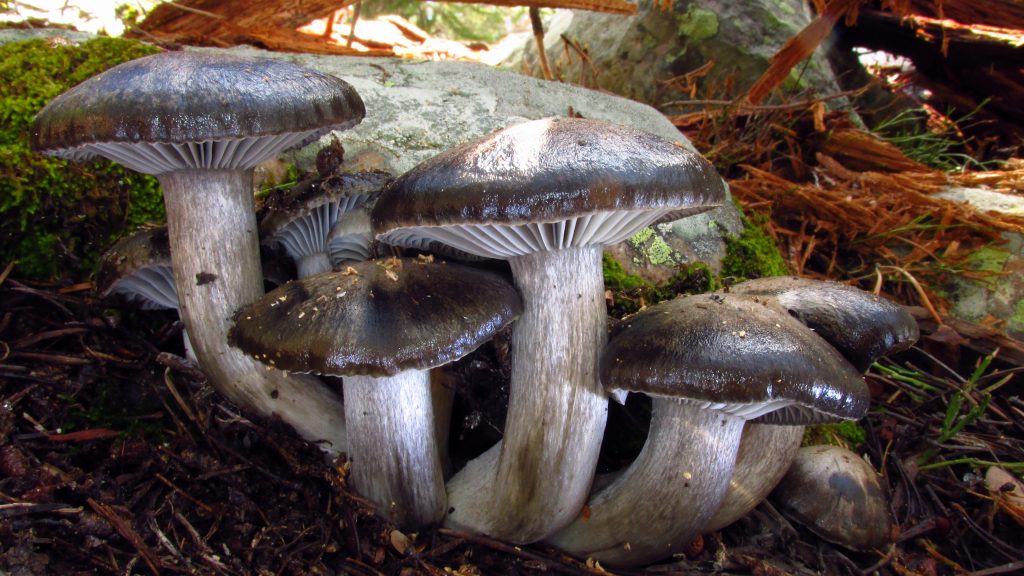 This species of mushroom is found throughout the world including North America, Europe, Eurasia, and even Southeast Asia. However, in Europe due to the loss of its natural habitat of old coniferous forests and soil acidification as a consequence of clear felling, planting of allochthonous trees, fertilization, and acid rain, the numbers of Hygrophorus marzuolus are in decline. As a result, this species is included in the Global Fungal Red List as Near Threatened (NT).

From a taxonomic standpoint, this species was first described as Agaricus marzuolus in 1821 by the notable Swedish mycologist Elias Magnus Fries. It would not be until 1893 that the Italian mycologist, Giacomo Bresadola, would reclassify this species in the genus of Hygrophorus under its current name.

Overview of defining macromorphological features of Hygrophorus marzuolus include large, robust firing body; dingy whitish to gray or black cap with a shiny surface and a pale center; waxy gray gills, and a thick, streaked stem that is white either at the top or bottom and tinted gray everywhere else. Another distinctive identifier of this species is its propensity to occur under or near melting snowbanks.

Cap: The cap is 4 to 10 cm in diameter. It is convex, with an incurred margin at first, expanding to broadly humped or flat, often with a flaring outer limb and disc. The surface of the cap is smooth, sticky, streaked, and dingy white to olive-gray or olive-black. The flesh is thick, firm, watery light yellowish gray, and may be somewhat spotted.
Gills: The gills are adnate to adnexed, distant, broad, and thick. They are gray to dingy white, unchanging, or changing to a slightly darker color with age. Gill trams divergent.
Stem:  The stem is 4 to 7 cm tall and 1 to 2 cm wide. It is thick, solid, and firm. The surface of the stem is moist but neither slimy nor sticky. The color matches that of the cap or may be slightly lighter.
Spores: The spores of this species are smooth, ellipsoid, and measure 7-9 by 4-5 µm.
Spore Print: This species produces a white spore print.
Smell: No distinct smell.
Flavor and Edibility: No distinctive flavor. According to literature, this species is not consumed in North America but is widely eaten in Europe.
Habitat:  Hygrophorus marzuolus is an ectomycorrhizal mushroom growing in old coniferous forests. It can often be found growing solitary or gregarious in wet zones at higher elevation mountainous areas ranging from 200 to 2000 meters. It most commonly grows underneath melting snowbanks or nearby them beneath litter of leaves and moss.
Range: This species can be found all over the world. It is found throughout mainland Europe and Eurasia in countries such as Andora, Austria, Croatia, Czech Republic, France, Germany, Italy, Macedonia, Montenegro, Poland, Romania, Serbia, Slovakia, Slovenia, Spain, Switzerland, and in the Russian Federation even as far as Siberia. In North America, it has been reported in the states of Washington, Oregon, Idaho, Arizona, California, and Montana. Specimens have been found in Morocco and even Pakistan.
Fruiting Season: Early spring to summer.

Hygrophorus marzuolus is not known to be toxic and does not pose any harm to humans when consumed.