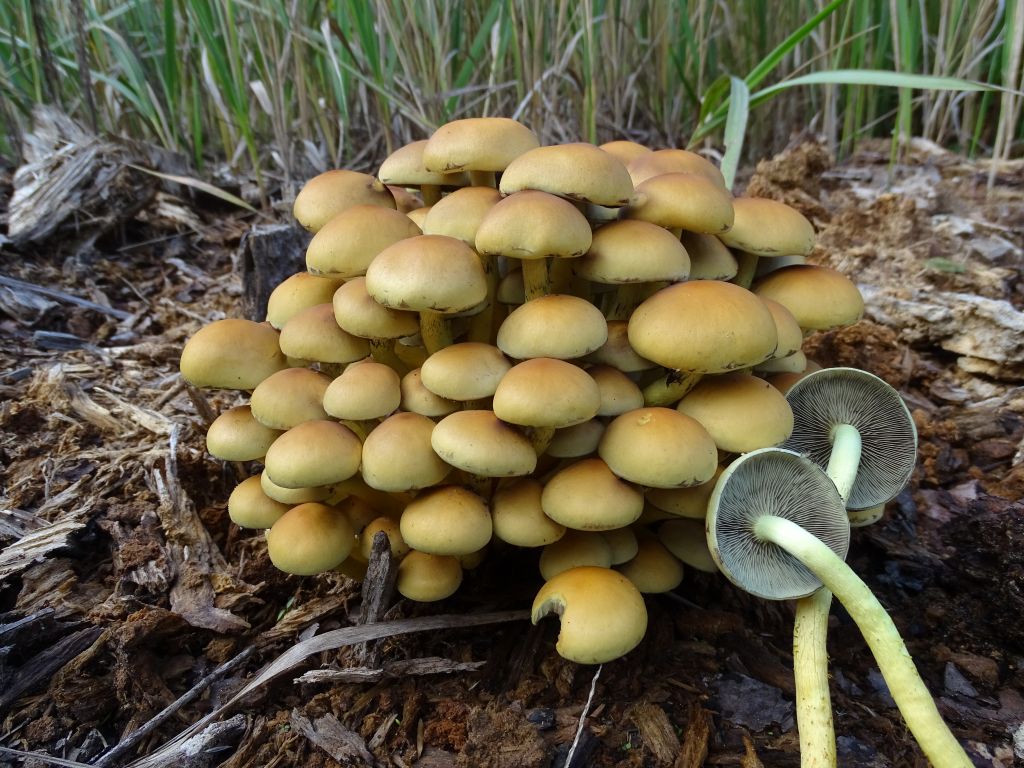 The Sulfur Tuft[i][ii] is a pretty little mushroom, often but not always a nice, clear yellow. It’s not especially tuftlike, though. It’s also poisonous, occasionally fatally so.

Cap: Small, rounded at first, becoming flat or nearly so with age. Variable in color. Usually begins as light reddish or orangish brown, becoming some shade of yellow,  or sometimes brownish or whitish. The bright canary yellow often shown in pictures is only one of many possibilities. The margins may retain wispy veil remnants. The interior flesh is yellow.
Gills: More or less attached to the stem. When very young, covered by a cobwebby veil called a cortina that soon disappears. Yellow, greenish yellow, or olive, developing dark spots as the spores mature.
Stalk: Long, thin, yellow to tawny, sometimes with a faint ring zone where the cortina once attached. Red-brown stains begin at the base and then, with age, spread upwards.
Spores: Ellipsoid, smooth.
Spore Print: Purplish brown.
Smell: Nothing useful for identification.
Taste: Very bitter.
Edibility: Dangerously poisonous.
Habitat: Feeds on decaying wood, preferably of conifers, in cooler climates. Fruits in clumps.
Range: Across most of the United States and Europe, but also in parts of Asia and southern Australia, Central and South America, and in New Zealand. Frequently observed in California, Washington, Oregon, New Jersey, Tasmania, Victoria, and all of central and northern Europe.[iii]

Sulfur tuft can continue eating—and fruiting from—wood that is so decomposed that it no longer looks like wood. A mossy patch on the forest floor might have several Sulfur Tufts come up within it because substances left behind by the wood under the moss are still there.

Sulfur Tuft[iv] is a close look-alike for its relative, the cotton tuft (H. capnoides), which is edible. Another relative, H. subviride, is also very close, but there is very little overlap in their ranges. Both the Deadly Galerina and some Honey Mushrooms (Ex. Armillaria Mellea & Armillaria Tabescens)  are also somewhat similar and likewise fruit from dead wood.

Sulfur tuft is poisonous and isn’t used medicinally. Some preliminary research suggests that one of its chemical constituents may be useful as an antibiotic[v], but that doesn’t mean the mushroom itself can be used as an antibiotic—the useful substance would have to be untangle from the poison somehow. It’s also worth noting that the potentially antibiotic substance does kill certain bacteria, but if it turns out to also kill patients (and we really don’t know yet), it won’t be useful as medicine!

Eating the sulfur tuft causes stomach pain, nausea, and sometimes temporary paralysis and visual distortion—there have been documented fatalities[vi]. The onset of symptoms can be delayed for up to ten hours. The mushroom tastes horribly bitter, so it’s unlikely anyone would simply make a meal of these things, but the risk is that a few might be accidentally included in a batch of some edible species capable of disguising the taste.