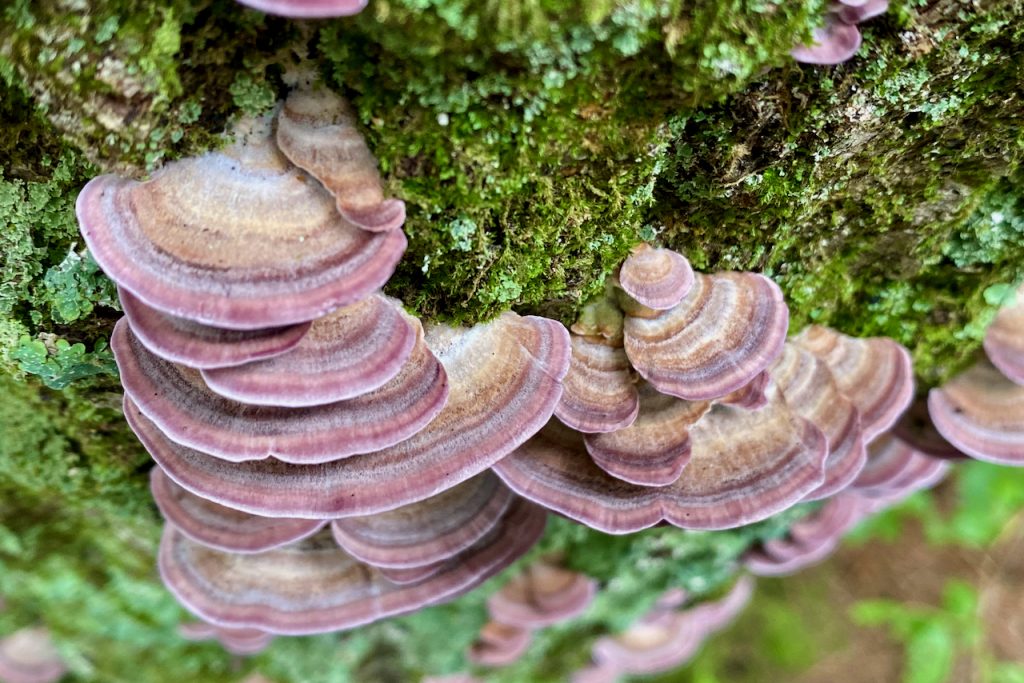 Also, another fungus sometimes grows on its upper surface and sends up fruiting bodies that look like tiny, black pins. So if you want to see one fungus fruiting from another, the Violet-Toothed Polypore is a good time to look.

Not all species have to be directly and obviously useful to humans. The violet-toothed polypore has its own ecological role and its own identity. That is enough.

Cap: Small to medium-sized, roughly kidney-shaped or fan-shaped, dry and tough in texture, like thin cardboard. May be very slightly hairy or smooth. Usually in overlapping clusters like the feathers of a bird. Colored white and pale gray in bands. The edge is sometimes pale lilac.
Pore Surface: The lower surface has pores rather than gills. With age, this pores surface can develop into small spines or teeth. In young specimens, this surface is purple to lilac, brightest near the outer edge. With age, the pore surface becomes buff or brownish. It does not bruise.
Stalk: None. The fruiting body attached directly to its substrate on its side.
Spores: Smooth, cylindrical.
Spore Print: White.
Smell: Nothing useful for identification.
Taste: Nothing useful for identification.
Edibility: Not palatable.
Habitat: Eats dead hardwood across many temperate regions.
Range: Lives in every US state and every Canadian province, plus much of Europe and parts of Asia. It is most common in eastern Europe and eastern North America[iii].

There are a great many fungi with thin, dry, paper-like fruiting bodies, perhaps most famously, Turkey Tail (Trametes versicolor). But very few of them are purple, even briefly. Those few include the Violet-Toothed Polypore’s relatives, T. abietinum, which prefers conifer wood and stays purple longer, and T. subchataceum, which eats only poplar and its relatives and does not grow teeth on its underside.

Trichaptum biforme is not palatable, nor is it used in medicine. It is not known to have any medicinal potential. It is possible to make a kind of paper from the fruiting body, though few people seem to do so[iv]. Its work breaking down dead wood is very important, however.

Toxicity, Safety, and Side Effects

Trichaptum biforme is not known to be poisonous, probably because nobody tries to eat it, given its texture. It’s probably best not to attempt a nibble.