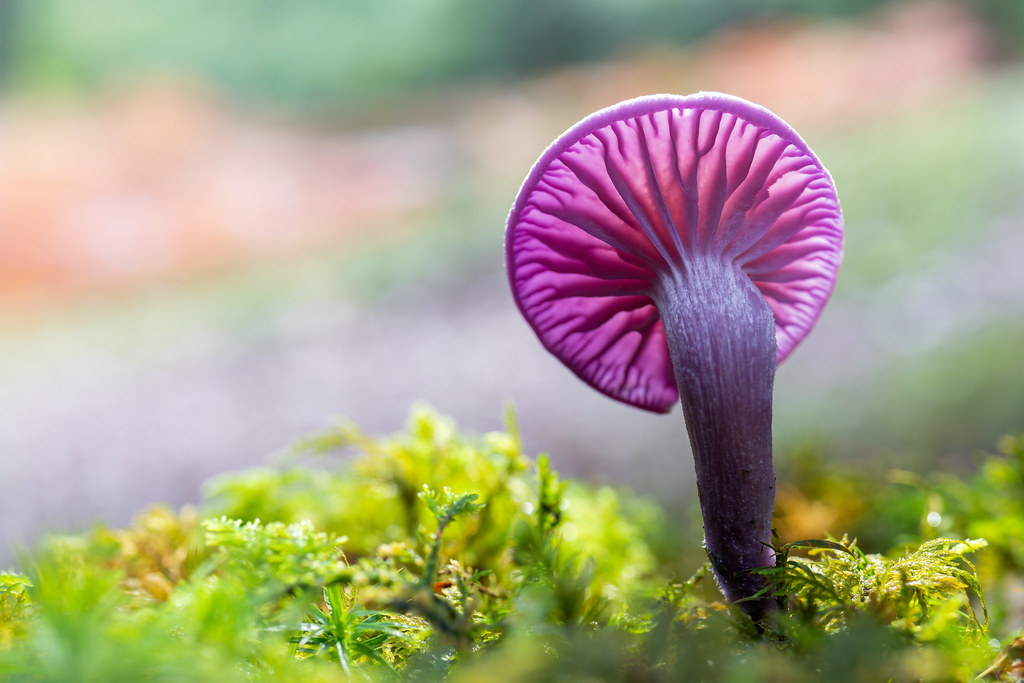 The designation amethystina in Laccaria amethystina refers to the violet(amethyst) coloring of the fresh cap of this tallogill mushroom.

The first known description of the Amethyst Deceiver occurred in 1778 by the English botanist William Hudson. Hudson named the mushroom Agaricus amethystinus, as most gilled mushrooms in the early days of fungal taxonomy belonged to the Agaricus genus. It was not until 1884 that the Amethyst Deceiver was reclassified into its current genus by Mordecai Cubitt Cooke, a famous British mycologist.

The Laccaria genus of tallogill mushrooms are edible, including the Laccaria amethystina. Although they are not frequently used in dishes because it takes rather a lot of them to make a good meal, and they are often quite small and tedious to collect in adequate quantities. Additionally, only the caps of Laccaria amethystina can be employed while cooking as their stems are tough and inedible.

As mentioned, the Laccaria genus, including Laccaria amethystina, is hygrophanous and can be quite variable in appearance depending on the age of the mushroom as well as the weather conditions.

Cap: The cap is 2-7cm(0.8-2.7in) in diameter. When young, the caps are convex or dome-shaped, but as they age they become flattened or depressed in the center with upturned edges, resembling a shallow funnel. The surface of the cap is smooth at first, later becoming roughened as it breaks to form soft, somewhat powdery scales. When the mushroom is young or moist, the cap will be violet to deep purple with streaking near its margins; as the mushroom ages(or dries) it will fade to a light reddish purple, then become a reddish brown, and finally paler and eventually almost white as the purple color disappears.
Gills: The gills are widely spaced. They can be either adenate(broadly attached to stalk) or decurrent(running down the stalk). The color of the gills often matches the color of the cap, but the purple/violet coloration tends to persist longer on the gills than on the cap.
Stem: The stem is 4-10cm high and 1-7mm thick. The shape is cylindrical and equal or slightly swollen at the base. The stem itself is tough and fibrous, often twisted, and hollow at maturity. Near the base, the stems are “hairy; and lastly, the coloration of the stem matches that of the cap or may be slightly lighter.
Smell and Taste: nondistinctive mushroom-like scent and taste.
Spores: The spores are white in color; roughly spherical with diameter of 8–11µm; and are covered in spines up to 1.5um tall.
Spore Print: The spore print, which refers to the powdery deposit on the surface underneath, is white or flushed with pale violet.
Edibility: The Laccaria genus of tallogill mushrooms are all edible, including Laccaria amethystina, but not frequently employed while cooking.
Habitat and Range: The Laccaria amethystina can be found growing in temperate climates of Europe, Asia and Americas during late summer through to early winter. In North America, this mushroom is widely distributed east of the Rocky Mountains. Although they can be found growing alone, scattered, or gregariously in leaf litter in all kinds of woodland, they can be found in particular abundance underneath beech and oak trees.

Due to the fact that Laccaria amethystina is a hygrophanous mushroom it can resemble a variety of other mushrooms throughout its life cycle.

Most frequently, Laccaria amethystina may be confused for Laccaria laccata the true “deceiver” or other tallogill Laccaria species, making recognition and differentiation quite difficult.

Yet another look-alike is the Mycena pura. This is a purple coloured bonnet mushroom, but can be differentiated from Amethyst deceiver by its pale gills and a soft, non-fibrous stem.

The Laccaria amethystina is not toxic itself. However, if grown in areas polluted with arsenic, this heavy metal may accumulate and reach toxic concentrations within the flesh of the mushroom. For example, a study conducted in South West China that evaluated arsenic concentrations and associated health risks in Laccaria mushrooms found that consumption of 300g fresh weight of Laccaria species for a single meal in a week yielded exposure values of arsenic higher than the limit dose for the intake of inorganic arsenic recommended by the Joint FAO/WHO Expert Committee on Food Additives.

Acute arsenic toxicity can present with garlic-like odor on the breath, nausea, vomiting, abdominal pain and diarrhea, as well as central nervous system manifestations such as seizures or coma. While chronic exposure to arsenic may lead to cancer of the lung, skin, and liver; and other pathognomonic signs such as thickening of skin on palms and soles as well as white bands across nails, known as mees lines.