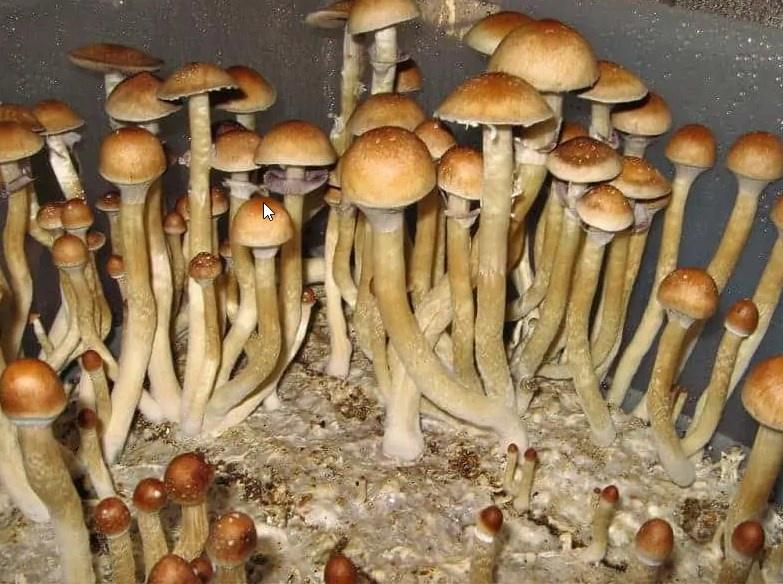 Psilocybe cubensis is the best-known of the “magic” mushroom species, probably at least in part because it’s easy to cultivate—there are a great many distinct cultivated strains, each with its own reputation and its own creative-sounding name. Burma mushrooms[i] are one of these Psilocybe cubensis strains. They are known for their potency and their fast, aggressive growth. The name reflects that fact that the strain was originally collected in the country of Burma. P. cubensis is a variable species, so many strains are simply wild variations that have been bred for consistent performance.

P. cubensis owes its “magic” effects primarily to psilocybin, a natural substance that works as a relatively safe hallucinogenic and mood-altering drug. Technically speaking, it’s a toxin that many of its human “victims” happen to like! The concentration of psilocybin varies from one strain to another, meaning that different strains have different dosage guidelines. Many people also claim that trip experiences from the different strains vary qualitatively. It’s hard to be sure, since trips vary for all sorts of reasons, including the biochemistry and even current mood of the user—so whether the identity of the strain is also a factor is difficult to say.

There are people who really like Burma mushrooms, though.

Two caveats before we get too far into this article:

First, psilocybin is only relatively safe. It’s not risk-free, and bad results are possible. By learning and following certain safety procedures, the chance of a good experience can be maximized.

Second, psilocybin is extremely illegal in most jurisdictions. Would-be users need to understand the law in their area and not use anything in this article in a way that leads to prison.

In general, psilocybin causes changes in mood, changes in thought-pattern, and, at higher doses, hallucinations. Less-enjoyable effects commonly include excessive yawning, nausea, and sometimes even vomiting. Severe reactions, such as convulsions, are very rare, but they can occur. Psilocybin has shown medicinal potential, and many people use mushrooms to self-treat a wide variety of conditions, from migraine headaches to anxiety. Unfortunately, the scientific research on these claims is still in its infancy, in part because of the legal barriers to clinical study.

“Mood changes” mean, ideally, euphoria and a feeling of connectedness, though some people instead experience anxiety—which can be intense and disturbing. Some users explain the radically different possible effects by saying that psilocybin simply enhances whatever the user was already feeling. This is one reason why proper mental preparation for the experience, together with a safe and enjoyable setting, are so important

Burma mushrooms[ii] are generally said to produce an intense and enjoyable experience, but with little of the insight encouraged by other strains.

Burma is known as a very potent strain, meaning that a typical-sized dose will have a stronger effect.

Burma is not an especially picky strain. Any mushroom growing method normally used with P. cubensis will work. Several different brands of grow-kits are available for the Burma strain, or growers can build their own set-ups from scratch (See: PF Tek, Monotub Tek, Shotgun Fruiting Chamber) and start with spores.

Burma[iii] is generally considered a very fast-growing strain, with a colonization time of only days. However, the biggest influence on how quickly spores germinate and how quickly they grow may not be the strain but rather the age and health of the spores. The important thing is for growers to get good spores no matter what strain they use.

It’s possible to calculate a rough estimate[iv] for proper P. cubensis dosage, based on the strain, whether the mushrooms are fresh or dried, and what kind of experience the users want—from microdosing on up to a “heroic dose.”  But even within a strain potency can vary, and some people are more sensitive to psilocybin than others. So dosage guidelines can only ever be just that, guidelines. Burma simply has a smaller starting point than most other P. cubensis strains.

It’s best to err on the side of a dose that is too small, rather than too large, since unpleasant side effects are more likely at higher doses.

Popular methods of consumption for Burma Mushrooms include Lemon Tek and Shroom Tea.

The decision to buy mushrooms verses grow them depends on careful consideration of pluses and minuses on each side—there is no one right answer.

Growing at home is cheaper, on a per-dose basis, by far[v]. The common substrate materials, such as bird seed, popcorn, or other grains, are cheap and easily available. Spores must be purchased, but they only need to be purchased once; the grower can leave a few mushrooms to mature, then collect spores to start the next grow. But while many people enjoy growing mushrooms, not everybody wants a large supply of just a few strains, and not everybody wants to wait several weeks to get their product. Beginners might not even know if they’ll like mushrooms, while experienced users might want to try a different strain every week. So for some people, the greater cost of buying mushrooms is worth it.

Another issue is quality[vi], one that definitely leans towards home-grown. It’s not that growing at home always results in higher quality, it’s that the grower knows what they’re getting and can take steps to make the product as good as possible. But since buying mushrooms is illegal in most jurisdictions, the buyer has no recourse if the seller does something wrong.

The final issue is legal risk[vii].

In many places, buying psilocybin mushrooms is illegal, but buying the spores of these mushrooms is not—the spores don’t contain psilocybin (be aware, though that some jurisdictions have closed this loophole, making spores illegal, too). So it’s possible to buy everything needed for a grow without breaking the law. Letting the spores germinate is a crime, but no accomplice need know about it.

On the other hand, if a grower does get caught, the legal consequences can be severe, and producing a large supply at home means having illegal material on hand more or less constantly, increasing the risk of getting caught.

In some areas, possession of small amounts of psilocybin mushroom for personal use has been decriminalized, in which case buying small amounts (as opposed to growing large amounts) is certainly the better option.