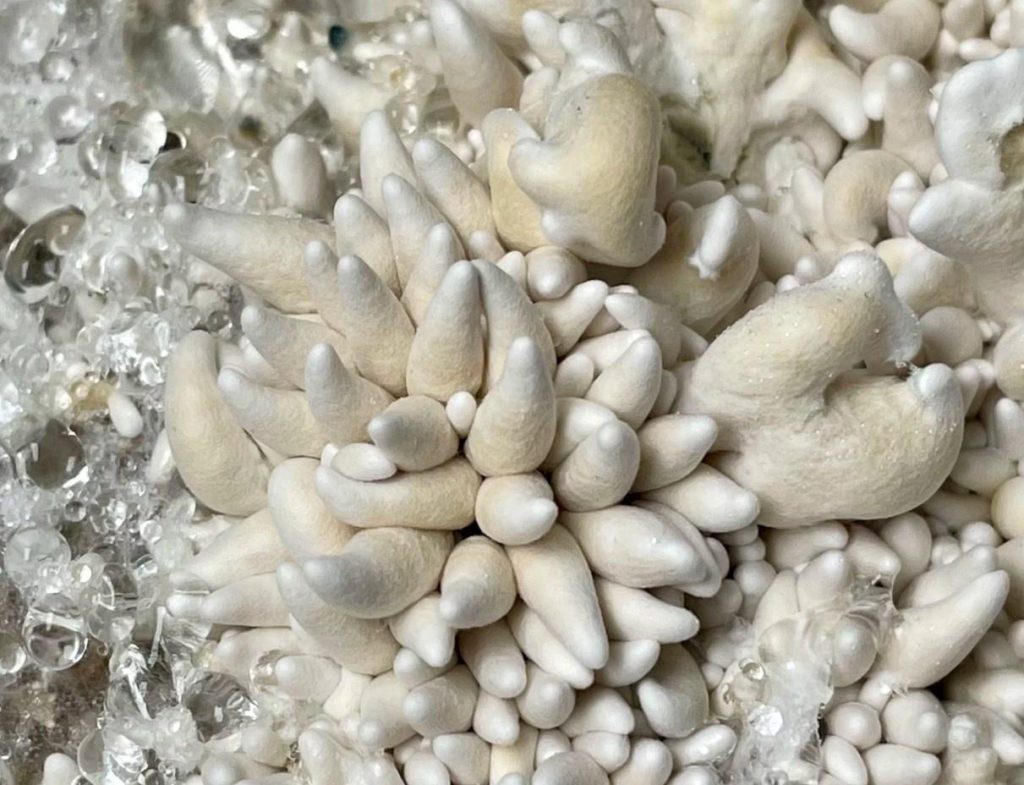 Enigma Cubensis[i] is not a species. Rather, it is a mutant form—or, perhaps several mutant forms—of the popular psychoactive species, Psilocybe cubensis. It’s what’s called a “blob mutation.” More on what that means shortly, but it doesn’t produce spores. Instead, Enigma must be propagated entirely by cloning.

For many years, Enigma was difficult to get, or even find out much about. The secret of its growth was kept to a small, inner circle for which membership was strictly invitation-only[ii]. The culture has become more widely available, but it’s still more than a little unusual.

There is, in fact, more than one Enigma, since the blob mutation has occurred in multiple P. cubensis strains. It’s a little unclear whether the different blobs are distinct from each other in any recognizable way.

We need to acknowledge before we get started here that possession or use of the psychoactive substance, psilocybin, is illegal in most jurisdictions. Penalties can be extremely draconian. Please do not use any information in this article to get arrested. Know the law in your area. We don’t want to lose readers.

Enigma’s claim to fame is that it doesn’t exactly produce mushrooms. When it begins to fruit, it pins just like ordinary P. cubensis, but then something odd happens. The pins don’t start to form caps. Instead, they just get larger and larger and eventually merge together, forming masses of fungal tissue that may resemble brains, cauliflower (the plant), or cauliflower mushrooms. They never make spores.

The masses—blobs—are dense, slow-growing, and often bluish. They can be quite large.

The Enigma blobs may look extremely unusual, but they can be used exactly like psychoactive mushrooms can. They can also be preserved in the same ways, but drying or by immersion in honey. The blobs are actually a better candidate for honey than most mushrooms.

Trip effects are essentially the same as for any other P. cubensis.

That is, some people claim that different strains produce qualitatively different trips, while other people say a cube is a cube, or that the only difference between strains is potency. There is no definitive resolution to that debate. But few, if any, claims are made that Enigma has any kind of distinctive style that marks its trips as unusual. It’s simply a bizarrely-shaped growth-form, a novelty product.

Like other psilocybin trips, a trip with Enigma usually involves a combination of altered mood, altered perception, and altered thought-patterns.

It’s the altered perception—the hallucinations—that really gets the most attention from non-users, who often speak of psychoactive fungi simply as hallucinogens, as if making people see things were the only thing psilocybin does. Actually, the alteration of perception is a very dose-dependent effect, so that people taking an extremely low dose might experience altered mood and thought-patters without any hallucination at all. Larger doses make thinks seem weird (walls may breathe), but only at very high doses do the hallucinations start to seriously compete with reality.

Actual psychonauts are more interested in mood alteration and especially thought-pattern changes, which can include important, even life-changing, insights.

In most cases, mood alteration means euphoria and deep feelings of connectedness—however, extreme anxiety states are also possible. Many people say that what psilocybin really does is to deepen and intensify whatever emotional state the user has going into the experience. Making sure that one’s mental state is relaxed and positive and that the surroundings are safe and comfortable is therefore just one of a list of recommended safety practices it’s important not to neglect.

Psilocybin also has other effects that don’t quite come under the heading of “high” or “tripping.” These can include problems with balance and physical coordination as well as nausea and vomiting. In some extremely rare cases, psilocybin has caused convulsions and even death. Psilocybin is one of the safest ways to alter the mind, but it’s not altogether risk-free. It’s important to learn and practice the safety procedures, and to not trip alone.

Enigma is reported to be more potent, sometimes much more potent, than most other P. cubensis strains. That means that to get the same experience, you need a smaller dose.

Dosage is important with any form of psilocybin because the relationship between dose size and trip effect is not obvious and gradual, like a dimmer switch. Instead, there are effects that are absent at low doses and then suddenly appear as the dosage increases. Hallucinations are the obvious example, but unwanted or even dangerous side-effects are more likely at higher doses, too.

It’s always best to err on the side of taking too little, rather than too much. A weaker-then-expected trip may be disappointing, but a stronger-than-expected trip could be dangerous.

Popular methods of consumption for Enigma Shrooms may include Lemon Tek and Shroom Tea.

Growing Enigma begins much as any other P. cubensis grow does, except that you’ll be starting with liquid culture, rather than spores (remember Enigma doesn’t make spores). Whatever method you prefer to grow magic mushrooms, PF Tek, Monotub, Shotgun, grow bags, just try it. If P. cubensis likes it, Enigma will like it. Colonization time is within the normal range.

It’s when Enigma starts to fruit that things get weird. Besides making blobs rather than mushrooms, Enigma is also unusual for growing its fruits very, very slowly. The process could easily take a couple of months. Most people harvest when the fruit-blobs develop a bluish color and get a little softer.

The tricky thing is that because fruiting takes so long, the chance of something going wrong before you’re ready to harvest is really high. Contamination is especially likely, so growers must be careful and vigilant. Even so, very few people can get a second flush from Enigma, because the grow ends up contaminated eventually.

Basically, growing Enigma doesn’t require any specialized techniques or unusual know-how. If you can grow other cubes, you can grow Enigma. But you’ll be signing on for a long commitment of caring for the fruiting phase, and you’ll have an unusually high number of opportunities to mess up.

So don’t mess up.

Generally speaking, would-be psychonauts have two options; buy the shrooms or grow them. Which is the better option for any given person depends on what their interests and resources are, as well as the legal situation in their area. The same is true for Enigma, but with added complications.

Growing at home is definitely cheaper on a per-dose basis, plus mushroom cultivation makes a fascinating hobby. And since spores contain no psilocybin, they can be bought and sold legally in most (not all!) jurisdictions—that means the only illegal parts of the process take place in the privacy of the grower’s own home. So growing at home is good for people who want a large supply of mushrooms and have the time and resources to attend to mushroom-growing for weeks or even months on end.

Unfortunately, to be caught growing psilocybin mushrooms is legally very serious. Not only are you likely to be charged with manufacturing an illegal drug, but based on the size of your crop, you are likely to be charged as a dealer even if you are not. So growing is not an acceptable option for people who don’t have good security and a lot of privacy.

Then, too, not everybody wants a large supply of a single kind of mushroom. Some folks like to try a different strain every time. Some use mushrooms only very rarely. Others don’t even know if they like mushrooms yet. For people who either can’t securely hide their grow equipment and crop, or don’t want more than a few grams at a time for other reasons, buying is a much better option.

Buying is an even better option where possession of small amounts for personal use has been decriminalized by keeping six months’ worth of dried shrooms in your closet has not.

But yes, Enigma complicates the picture.

First, because Enigma has no spores, the only way to start a grow is to get some liquid culture or a sample of living mycelium or fruiting body to clone from. These substances all contain psilocybin and are thus illegal in any jurisdiction where psilocybin is. That makes cultivation a little riskier, legally.

Second, while it’s now possible to buy Enigma culture, for a long time it wasn’t—and it may still be harder to come by than some other strains.

The decision may be tilted slightly more towards buying, in this case—though, on the other hand, the whole reason to get Enigma, instead of one of the other highly-potent cubensis strains, is that Enigma is delightfully weird. To have more opportunity to glory in its weirdness may be reason enough to grow, for some people.