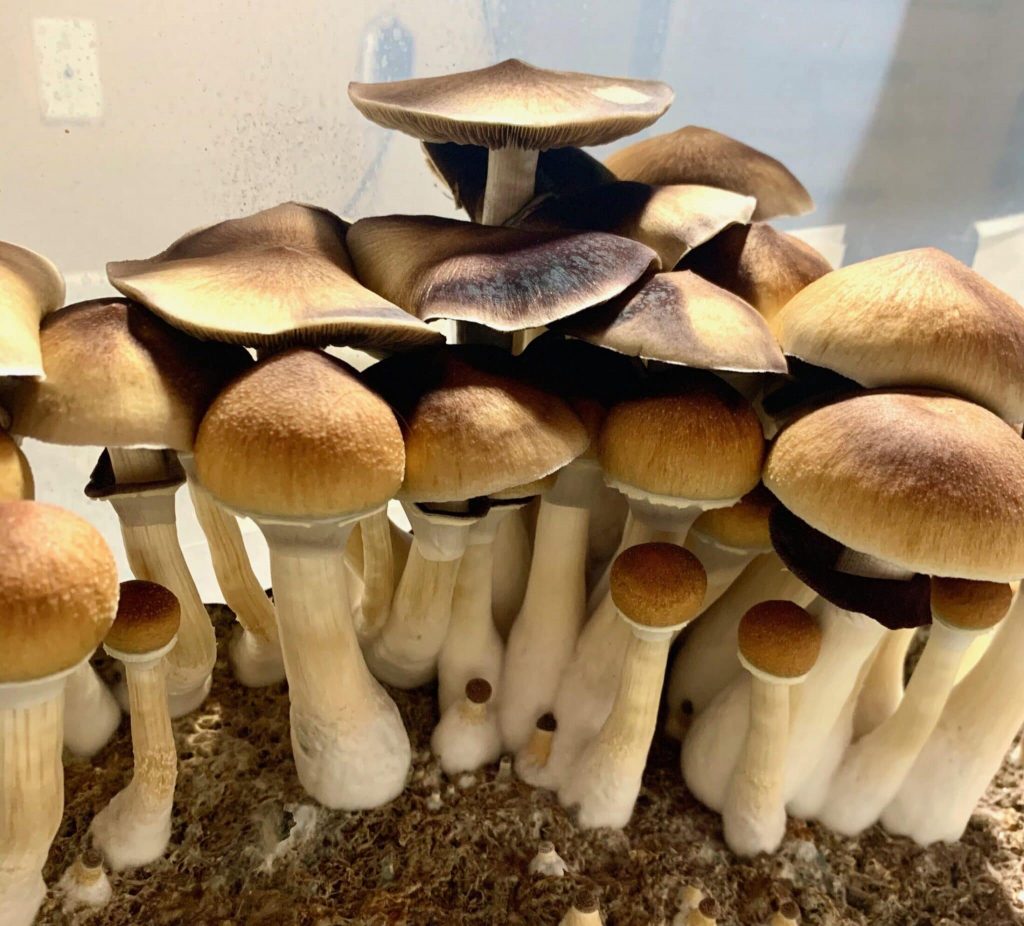 The PES in PES Mushrooms comes from Pacifica Exotica Spora, the name of the company that first offered the spores of this psychoactive mushroom (reportedly first found in the Amazon) for sale.  Now, PES Amazonia is widely available.

PES Amazonia[i] is yet another cultivated strain of Psilocybe cubensis, the best-known of the “magic” mushrooms, the one most people mean when they refer to “shrooms.” It’s not the only source of “magic,” there are many other species that contain the same active ingredient, psilocybin, plus some species, such as some of the Amanitas, that contain other psychoactive substances. P. cubensis may owe its popularity to the fact that it’s intermediate in potency, neither too weak nor too strong, and easy to grow. In the wild, it feeds on the dung of large animals, but it’s usually cultivated on grain.

The different strains do seem to vary in their potency. Whether they also vary in their effects—whether equivalent doses would provide different trips—is debatable. Some people insist that psilocybin is psilocybin, and that therefore a cube is a cube. Others are sure there’s a difference. It might seem like the question would be easy to resolve, but it’s not, because trip experiences vary so much. The user’s personal biochemistry, mindset, and even current circumstance can all have a huge impact on how the experience goes.

That being said, PES Amazonian is said to be a potent and very spiritual strain. These mushrooms are typically very large. The caps are reddish, especially when young.

There are two important caveats to mushroom use.

First, while psilocybin is relatively safe, it’s not risk-free. It’s important to take the mushrooms seriously and to learn and follow safety procedures.

Second, in most jurisdictions, psilocybin is extremely illegal in any form. Please do not use any information provided here to get sent to prison.

Generally speaking, psilocybin causes euphoria or other changes in mood, changes in thought-pattern often including spiritual or personal insight, and, at higher doses, hallucinations. Less-enjoyable effects commonly include excessive yawning, nausea, and sometimes vomiting. Severe reactions, such as convulsions, are very rare, but can occur. Psilocybin is relatively safe, but it is not risk-free.

Among the most common negative effects is anxiety, which can become extreme—despite the fact that psilocybin has also been advocated as a treatment for anxiety and depression. Some people say that psilocybin is an enhancer, exaggerating whatever mindset the user is already in.

PES Amazonian[ii] specifically is said to be less visual and more mental or spiritual than many of the other strains. The high can last up to eight hours.

PES Amazonian is an extremely potent strain, among the strongest P. cubensis strains available. That’s one reason for the strain’s popularity[iii].

PES Amazonian[iv] is considered a good option for beginner-growers, since it grows fast with a short colonization time and fruits prolifically. Buying shrooms right now isn’t possible however; it is possible to buy grow-kits or to buy spores and start from scratch.

Rough estimates[v] for proper P. cubensis dosage can be calculated for any of several possible experience types, such as microdosing (not enough mushroom to cause a true high, only subtle effects) on up to a heroic dose (something that could cause serious mental disturbance in the unprepared). The word, “rough,” here is important, though. Even within a strain, though, potency can vary from mushroom to mushroom, while human sensitivity to psilocybin also varies. It’s best to err on the side of taking too little rather than too much, since the risk of negative effects increases with the dose size.

Mushrooms are generally sold dried, but not always. Keep in mind that dosage is very different for fresh material.

Generally, doses for Amazonian must be smaller than for most other strains, since Amazonian is unusually potent.

Popular methods of consumption for PES Amazonian include Lemon Tek and Shroom Tea.

Would-be psychonauts can buy mushrooms or grow them. There are advantages and disadvantaged to each.

On a per-dose basis, growing at home is cheaper by far[vi]. The mushrooms will grow on easily-available substrates, such as bird seed or popcorn, and growers who let a few mushrooms go unharvested and then collect spores never have to buy spores again. But many people don’t want an infinite supply of just one strain—they want a variety. And while growing mushrooms is a fun and interesting hobby, many people really don’t want dozens of doses two or three months from now—they want one or two doses now. So for some users, buying is definitely the way to go.

Quality is also an issue[vii]. In jurisdictions where psilocybin is illegal, buyers have no recourse against disreputable sellers. If the product has lost potency or isn’t the right species, the buyer can’t sue. Home growers have the advantage of controlling quality themselves.

Then there is legal risk[viii].

In many areas, psilocybin (and any mushrooms that contain the substance) is illegal, but since spores don’t have psilocybin, buying and possessing spores is fine. Growers appreciate the fact that they don’t need to commit a crime to set up a grow. Germinating the spores breaks the law, but nobody has to know about it, since it occurs in the privacy of the grower’s home. Unfortunately, if a grower does get caught, the penalties are likely to be more severe, considering the much larger supply.

In areas where psilocybin has been decriminalized for personal use, buying a few doses is likely to be legally safer, since “manufacturing” several pounds of illegal mushrooms may not look like “personal use” to a court.

Ultimately, the decision to buy or grow depends on the user’s specific circumstances and willingness to accept different kinds of risk.