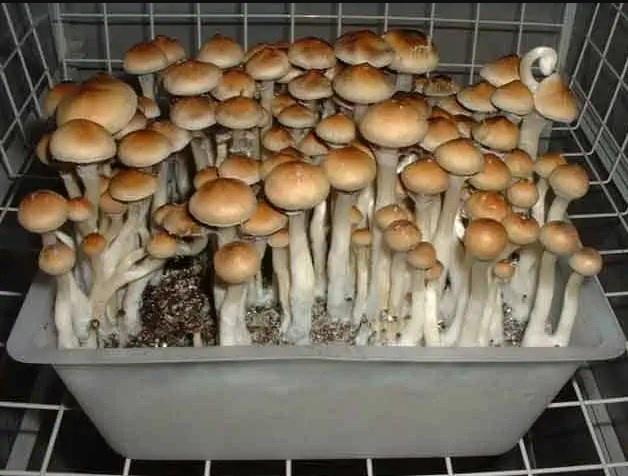 Ecuador cubensis, or the Ecuadorian magic mushroom, refers to Ecuadorian strain of the widely known species of the psilocybin-containing mushroom Psilocybe cubensis. The Ecuadorian cubensis does not appear to be morphologically or characteristically different from Psilocybe cubensis, arguably the most majestic of all Psilocybes. Both of these mushroom are easily recognizable by their large size, bell-shaped cap with golden color, well-formed and persisting ring, and bluing reaction of stem and veil upon bruising, and love for well-manured fields. [i]

The taxonomic history of the Ecuadorian strain is unfortunately unavailable but the Psilocybe cubensis was first discovery by the Spaniards during the age of colonialism and was taxonomically classified during the 1900s. Since then Psilocybe cubensis has become a widely cultivated psilocybe-containing mushroom throughout the world due to its ease of cultivation and moderate hallucinogenic potency. The Ecuadorian cubensis is a much lesser known and cultivated strain, but it shares the hallucinogenicity and ease of cultivation of its ancestor.

As already mentioned, Ecuadorian cubensis strain does not differ from Psilocybe cubensis morphologically. Therefore identification and description of P. Cubensis can also be applies to Ecuador cubensis.

The various Psilocybe mushrooms can be quite difficult to tell apart from each other as well as from other similar genera such as Galerina, Hypholoma, and Stropharia. This misidentification and confusion of this species with closely resembling toxic species is the main danger. Therefore, being familiar with the macroscopic and microscopic morphologic features of the Ecuadorian psilocybe is very important for safety. It is also important to note that the

Cap: The cap of this species is 2 to 8cm across in diameter. It is conical to bell-shaped with a central knob, or umbo, at first. However, with age, the cap expands becoming convex to broadly convex and eventually flat-topped with or without the umbo. The color of the cap in young mushrooms is chestnut or cinnamon-brown, becoming light or golden brown at maturity. The surface of the cap is viscid to smooth when moist but dries rapidly. The veil often leaves behind spotted remnants on the cap, which tend to disappear with time, leaving behind an overall smooth surface.
Flesh: Similarly to other psilocybes, the flesh of this species demonstrates a bluing reaction when damaged or bruised.
Gills: The gills are narrow, close, and attached to the stem with a notch at the point of attachment. In your fruiting bodies, the gills are grey, but they become purplish-grey to almost black with distinct white edges with age.
Stem:  The stem is 5 to 15cm tall and 5 to 15mm thick, with a widening towards the base in most specimens. The stem is smooth and mostly white but may take on a yellow discoloration. The stem also demonstrates a bluing reaction when damaged or bruised.
Ring: The Ecuadorian cubensis is characterized by a partial veil that leaves behind a persistent membranous ring on the upper portion of the stem. The ring is white, but bruises blue similar to the cap and stem.
Spores: The spores of this species are subellipsoid, and 11.5-17µm by 8-11µm in dimension.
Spore Print: The spore print of the Ecuadorian cubensis is purplish brown
Edibility: Although this mushroom is edible, it is moderately hallucinogenic causing confusion, delirium, ad visual disturbances.
Habitat: This species is known to be coprophilic meaning that it loves manure. Therefore it can most commonly be found growing scattered or gregarious on grassy meadows, mostly on cattle, horse, or other animal dung, or on well-manured fields during spring, summer, and fall. Most growth however occurs in the two months before the hottest time of the year.
Range: The Ecuadorian cubensis is known to grow in the high-altitude regions (over 1000 meters) of the Andes mountains.

Although Ecuador cubensis should be differentiated from other psilocybe containing species as well as from its virtually identical counterpart P. subcubensis, the most important differentiation has to be made between this species and similar-appearing toxic species. One such species is Galerina autumnalis.[iii]

The Ecuadorian cubensis is of moderate to strong comparative potency on the psylometric scale. However, it should be emphasized that the potency of any given mushroom is dependent on the state of the mushroom(raw vs dried), mode of consumption, individual physiologic sensitivity as well as on the methods, and the environment of growth.

The exact psilocin and psilocybin content of Ecuador cubensis are unavailable.  However, we know that is thought to be of comparatively equal or slightly stronger potency than Psilocybe cubensis. Therefore, it can be assumed that the contents of psilocin and psilocybin in the Ecuadorian strain can be somewhere in the range or slightly higher than 0.15-0.63% and 0.11-0.50% respectively, as these were determined to be the psilocybin and psilocin contents of P. cubensis by various mycologists in studies conducted during the 1990s. Furthermore, it appears that artificially cultivated mushrooms seem to be more potent when compared to mushrooms collected in the wild.[iv]

As it is evident, the potency of these mushrooms can be highly variable, and is, therefore, best to err on the side of caution and always start with small amounts. Remember you can always take more, but you can’t take less!

The dosage of psilocybin-containing mushrooms is very difficult to calculate as a great degree of variability exists in the psilocybin content of individual samples. Furthermore, great variability exists in response to psilocybin dosages across individuals. This variability is dependent not only on physiologic factors of absorption and metabolism but also on extra-pharmacological factors such as mental state and environment, which are often referred to as “set and setting”. One recent study from the Department of Psychiatry and Behavioral Sciences at the Johns Hopkins University School of Medicine seems to suggest that fixed doses ranging from 23-27mg or weight-adjusted doses ranging from 20-30mg per 70kg are appropriate for pharmacotherapeutic use.[v] While on the other hand, other researchers have used very low doses of psilocybin at 1-3 mg per 70 kg.[vi] Whether these macro- or micro– dosages will be appropriate for recreational use is unknown, but they can certainly be used as a starting point from which adjustments can be made to achieve the desired effect. As a general rule starting with 1-3 mg per 70 kg is advisable.

Popular methods of consumption for Ecuadorian cubensis include Lemon Tek and Tea.

The trip effects of Ecuadorian cubensis include both subjective mental and objective physical symptoms and signs. These effects are mediated by the compounds psilocybin and psilocin, which act through as yet not well-known mechanisms that maybe involve serotonergic and sympathetic systems. These effects usually appear within 20-30 minutes of ingestion and last roughly 6 to 8 hours, but they may persist for up to 12 to 24 hours.

When taken in small amounts the pharmacologic effects of Ecuador cubensis are not themselves dangerous or life-threatening. However, various unfavorable effects such as emotional destabilization and derealization that follow use may lead to loss of boundaries and risk-taking behaviors which can lead to fatal accidents. As such it is always important to remember that psychoactive mushrooms should be used in moderation as “Dose Makes the Poison” and in a safe environment.

The use of psychoactive mushrooms should not be combined with substances such as alcohol, cannabis, or amphetamines because these agents all have similar effects on a user’s mood, thought, and behavior and will result in “exaggerated” effects which can be dangerous for the user.

Psilocybe cubensis is the most commonly grown psychedelic mushroom in North America and Europe, but the Ecuador cubensis strain of this species is less commonly grown. Various commercially available Ecuador Cubensis growing kits are available that only require the addition of water and produce fruiting mushrooms usually within 12 to 15 days. Alliteratively, individuals may purchase Ecuadorian Cubensis spores that they themselves can grow on Pf Tek However, this is a more difficult process that involves making, sterilizing, inoculating, and incubating the PF Tek substrate. After all this, the colonization of the PF Tek substrate can then take up to four weeks. As such growing from spores is a much more arduous process. Specific details on the growth of Ecuador Cubensis either from kits or spores are usually found in the “growing manuals” that accompany these products. [viii]

Buying Shrooms or cultivating mature mushrooms is illegal everywhere in the United States as psilocybin and psilocin contained within these mushrooms are Schedule I substances under the United States Controlled Substances Act.[ix] However, individuals may buy Ecuador cubensis spores for microscopy, taxonomy, and general research purposes in certain states of the United States. More recently, however, several states and countries have decriminalized the growth of psilocybin-containing mushrooms for personal use. Therefore, one should always check their local rules and regulation regarding purchasing, growing, and/or consuming psilocybin-containing mushrooms, such as the Ecuadorian cubensis.