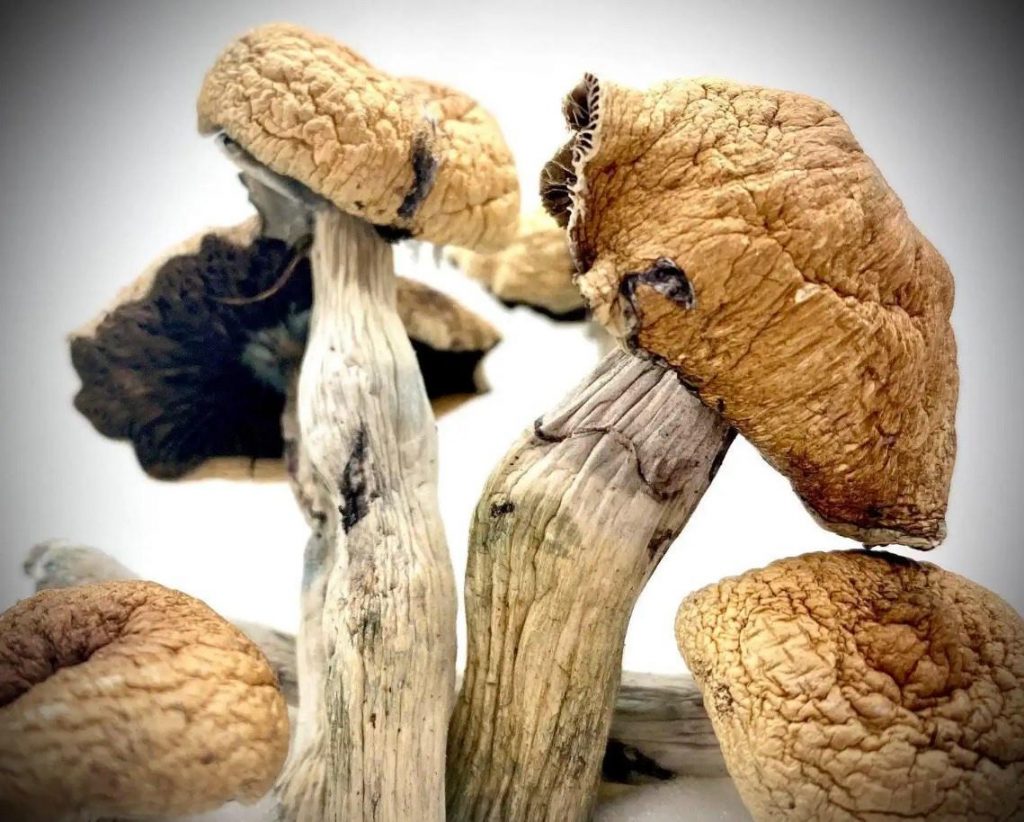 Lizard King[i], a strain of Psilocybe cubensis, is the subject of many conflicting stories, some of which may even be true.

For example, was it discovered by a mycologist who called himself Lizard King, or was it named in honor of Jim Morrison, who claimed a spiritual connection with lizards? Is the fact that it was originally discovered growing in a mixture of dung and wood important, a case of the dung-loving P. cubensis broadening its tastes, or was the fungus ignoring the wood in favor of the dung as most cubes would? Is Lizard King even distinct from other P. cubensis strains, or is a cube a cube?

We’re not in a position to resolve these questions. We can tell you what those familiar with the strain say about it. Then you can decide (just please don’t risk arrest in the process).

Lizard King is a typical cube in shape, but has very pale stems. The caps are usually beige. Although the mushrooms themselves are average in size, the shape of the caps can make them look more substantial.

Trip effects are, in general, the same as for any other cube—alterations in mood, thinking style, and, especially at higher doses, perception. Plus there are usually physical changes, such as poor coordination and nausea. Lizard King is reputed to have less “body load,” meaning less physical effects, than most P. cubensis varieties.

It’s worth noting that trip experiences with mushrooms of any strain can vary a lot, since what the user brings to the trip matters a lot. The ideal, for most people, is probably euphoria and a feeling of connectedness, plus deep, personal insight and lots of interesting visuals. And yeah, that can happen. So can a giant panic attack. And while more severe side-effects are rare, they can happen.

Users can increase their chance of having a good time by paying careful attention to creating the right mindset and setting for the trip (psilocybin is sometimes said to enhance whatever mood the user already has, so having a mood worth enhancing is important), and by making sure not to take too much. It’s also important to take time after the trip for re-entry and integration—those amazing insights won’t do you any good if you don’t take the time to understand them and learn from them.

But it’s also worth noting that even a “bad trip” can become a valuable learning experience, if you know to work with the trip instead of against it.

Lizard King is reputed to be medium- to high-potency, as compared to other cubes. However, it’s not clear whether the strain has actually been tested for average psilocybin content. In any case, all mushrooms are somewhat variable.

Most people think about psilocybin doses as having three to five levels. For example, there is the light dose a beginner is well-advised to take, a medium dose that might be more or less normal for an experienced user, plus a high dose that offers a bit more challenge. And then there is the microdose, that does not cause hallucinations and is often used medicinally, and the heroic dose, which risks serious psychological harm but can also bring great rewards for those who are ready for it. How big each of these doses actually is depends on the potency of the mushroom and several other factors. It’s possible to take a heroic dose of something with very low potency (you just have to eat a lot of mushrooms to get there). Likewise, it’s possible to take a microdose of something extremely potent).

The problem with listing dose sizes for any given strain (something many writers will do) is that not only do mushrooms vary, but so do humans. Your size, metabolism, biochemistry, and how recently you’ve tripped all influence how you will respond to a certain number of grams of mushroom.

So it’s less important to know what somebody else’s recommended dose sizes are and more important to understand your own brain and body—and, when in doubt, always err on the side of using too little rather than too much, since problems become more likely at higher doses, especially unexpectedly high doses.

Just with Lizard King, know that you’re going to be working with doses just slightly smaller than average for this species of mushroom.

Growing Lizard King[ii] is not difficult, as magic mushrooms go. Any method used for P. cubensis will work. Overall,  this strain is a fast grower capable of impressive yields, although colonization time is only average.

Because Lizard King is not difficult to grow, it’s reasonable to wonder if growing your own might be a better option than buying. And it’s true that growing has several advantages. Although there is an initial investment of equipment and supplies, you’re going to end up paying less per gram of mushroom than you would if you bought the mushrooms themselves. And while growing mushrooms does require time and effort, most people enjoy that aspect—mushroom-growing is a fascinating and enjoyable hobby all by itself. Then there is the fact that in most jurisdictions, possession of psilocybin in any form is illegal, so growing or buying psilocybin mushrooms breaks the law—but all the equipment and supplies you need to start a grow, including (with a few exceptions) the spores are legal to buy. That means that by growing, you can confine your legal risk to the privacy of your own home.

On the other hand, if you do get caught growing, penalties are likely to be more severe, because you are “manufacturing” a drug. Plus, you’ll have evidence against yourself in your home for months on end, instead of just for the few days between buying and using a dose or two.

Finally, if what you really want is a dose or two of Lizard King now, then taking several months to grow a couple of pounds of mushrooms isn’t really going to meet your needs.

The choice of whether to grow or buy comes down to the specifics of the law in your area, whether you have the time and other resources you need to grow mushrooms securely and discretely, and how much mushroom you want how often.