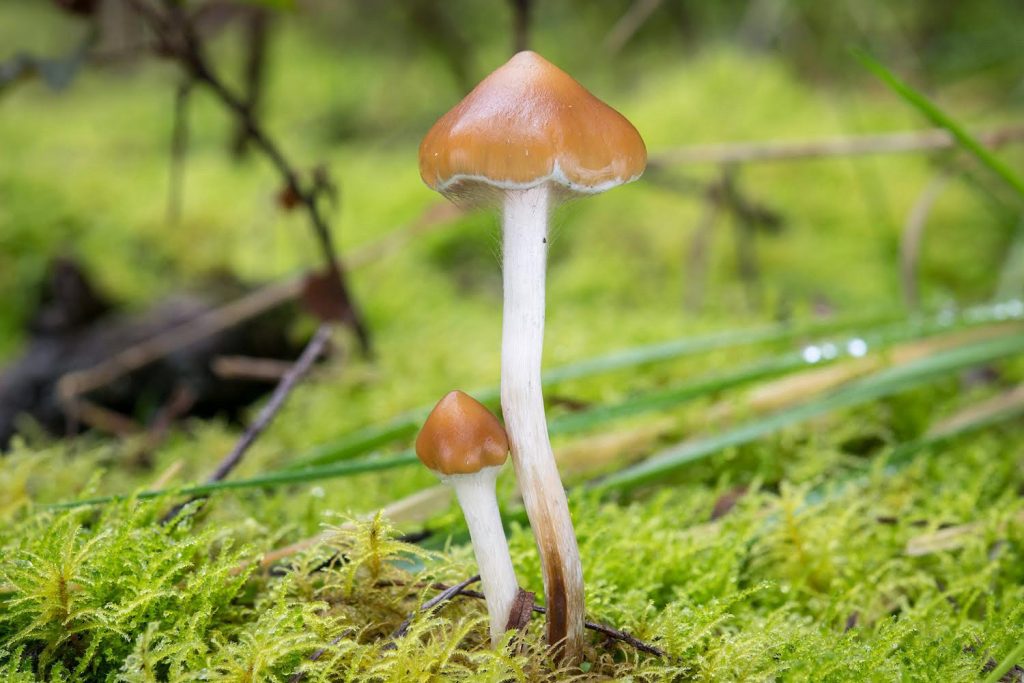 Psilocybe subaeruginosa[i] is a psychoactive mushroom native to the better-watered temperate parts of Australia, where it eats various kinds of dead wood (which may be buried, so the fungus can appear to fruit from the ground). It is widely considered the most potent Psilocybe species known, and has become popular for recreational (but, in Australia, extremely illegal) use. Unfortunately, not much is known about this species, since its legal status makes research difficult. Even its genetic relationships to other Psilocybe species is up in the air.

P. subaeruginosa as currently defined includes several other types that used to be considered separate species. Thus, older sources may list more psychoactive species in Australia than exist today, because some of the others were P. subaeruginosa.

P. subaeruginosa can look many difference ways, since the cap color (brown, yellow, or cream) and shape vary dramatically. The stem typically starts out white, then darkens with age. It also darkens when wet. The gills, which are initially covered with a cobwebby veil, start out white but then darken as the spores mature. Remnants of the torn veil may or may not be visible on the stem at maturity. The entire mushroom will bruise blue, but the process is very slow and can take several hours.

P. subaeruginosa can look a lot like several other Psilocybes, but as most of these species don’t grow in Australia, confusion is unlikely. Far more serious would be a mix-up involving one of several toxic look-alikes in the same habitat, including the aptly-named Deadly Galerina, which does grow wild in Australia. Given that P. subaeruginosa is a very variable species with multiple toxic look-alikes, gathering this species from the wild can be considered as requiring next-level identification skills (also, harvest is extremely illegal).

In general, the effects of eating any other psilocybin mushroom, except that because these are so potent, it’s much easier to get a surprisingly high dose. It is true that many mushroom species, including this one, deliver a range of other potentially mind-altering substances in addition to psilocybin, suggesting that the character of a trip may depend on the mushroom species—as some psychonauts claim. However, if P. subaeruginosa trips differ in character from the more familiar P. cubensis trips, it either hasn’t been documented, or the documentation is not readily available.

Psilocybin alters mood, perception, and thinking style. Ideally, that means euphoria and a sense of connectedness, plus interesting hallucinations and potentially life-changing insights. However, the full picture is a bit more nuanced.

Although psilocybin is famous as a hallucinogen—that’s the one thing most non-users seem to know about it—at low-to-moderate doses, the hallucinations are likely to be subtle. Extremely low doses can alter mood and thinking style without causing hallucinations at all. Conversely, a high dose might be extremely hallucinogenic.

Although it’s common for trips to feel really good—that’s part of why people trip, after all—there is no guarantee. Psilocybin enhances whatever mood the user has already, and that can translate into debilitating anxiety. Experienced psychonauts can use these difficult emotions as opportunities for personal growth, but it’s not fun.

And while it’s not uncommon to have startlingly new realizations and insights while on psilocybin, these won’t make much of a difference in the user’s life without a period of post-trip integration and processing.

The bottom line is that it’s important to carefully prepare for the trip by setting intentions, taking safety precautions, creating a safe and relaxing setting, and cultivating the right mindset. And it’s just as important to take the time to integrate afterwards. Skipping these steps makes increases the likelihood of problems and decreases the likelihood of the trip being with the medical, psychological, and legal risk involved.

There are indeed risks. Although psilocybin is one of the safest mind-altering substances known, its use is not risk-free. Side effects range from the common and merely unpleasant to the rare and extremely dangerous. And the likelihood of serious side-effects increases with dose-size.

P. subaeruginosa is also one of the species known to cause “wood-lover’s paralysis,” a temporary loss of muscle control probably caused by a substance other than psilocybin in the mushroom. Almost nothing is known about this condition, and while it does appear to be temporary, it could be extremely dangerous if it happened while the user was alone. This paralysis is one of many reasons it’s important to have a trip-sitter.

P. subaeruginosa is extremely potent, and may in fact be the most potent Psilocybe there is. In theory, that shouldn’t make a difference except that you need to eat less mushroom to get the kind of trip you want. In practice, though, high potency increases the chance of getting big doses more or less by mistake. Among other issues, eating just slightly too much can make a big difference. It also doesn’t help that this species is known to be very variable in its potency.

Because P. subaeruginosa is so potent, you’ll need a much smaller dose than you’re used to in order to get the kind of trip you want. It’s important to err on the side of taking too little rather than too much, because unpleasant and even dangerous side effects are more likely at higher doses—especially at doses higher than the user is used to.

Some people say that P. subaeruginosa is especially useful for microdosing because of its extreme potency, but that doesn’t actually make sense. With microdosing, getting the exact right amount is so important that many people recommend powdering a large batch of mushrooms and mixing the powder before measuring out doses in order to even out the natural variation between individual mushrooms. With a super-potent species, a slight and accidental change in dose size could make a big difference in the resulting experience. It’s usually better to use a low-potency mushroom for microdosing and to save  P. subaeruginosa the challenging or even heroic trips.

P. subaeruginosa is almost never cultivated indoors[ii]. As a wood-eating species, it’s not fond of the standard grain mixes used for growing P. cubensis, but it will happily grow on wood chips or cardboard, and indeed the mycelium will grow in a tub of cardboard. Unfortunately, persuading the fungus to fruit in artificial conditions is nearly impossible. Most growers therefore use outdoor growing beds and rely on natural conditions to trigger fruiting once per year. Colonization time is less of an issue when you’re going to be waiting the better part of a year for fruiting anyway.

An outdoor bed is much less labor-intensive, but of course it is much less discrete, plus there is the danger of the bed also being colonized by a poisonous look-alike.

Note that if you don’t live in an area where P. subaeruginosa is native, you shouldn’t grow it outside—it could escape into the wild and cause ecological problems.

That is, you can’t grow it indoors if producing a crop is your primary objective. If you just like growing mushrooms and want a challenge, then go ahead. You might even get a couple of mushrooms out of the project!

If you are in an area where you can cultivate P. subaeruginosa outdoors, then the decision is going to come down to security (can you keep the garden secret? Alternatively, can you plausibly deny that it’s yours or that it’s intentional if someone who shouldn’t does find it?) and how much mushroom you want when.

Growing is going to give you a large, high-quality supply once per year. You can dry the harvest, and then keep it for use whenever you want. But if you don’t want to wait a year, or if you don’t want to deal with the security concerns of having a year’s supply sitting around, then you’ll have to buy. Buying mushrooms presents its own legal risk (remember, possession of psilocybin in any form is extremely illegal in Australia) and there is no assurance of quality—you can’t report someone for false advertizing or breach of contract over an illegal product! But buying will get you a couple of doses in a timely manner at any time of the year.

And if you don’t live in the right parts of Australia, buying will be your only option.