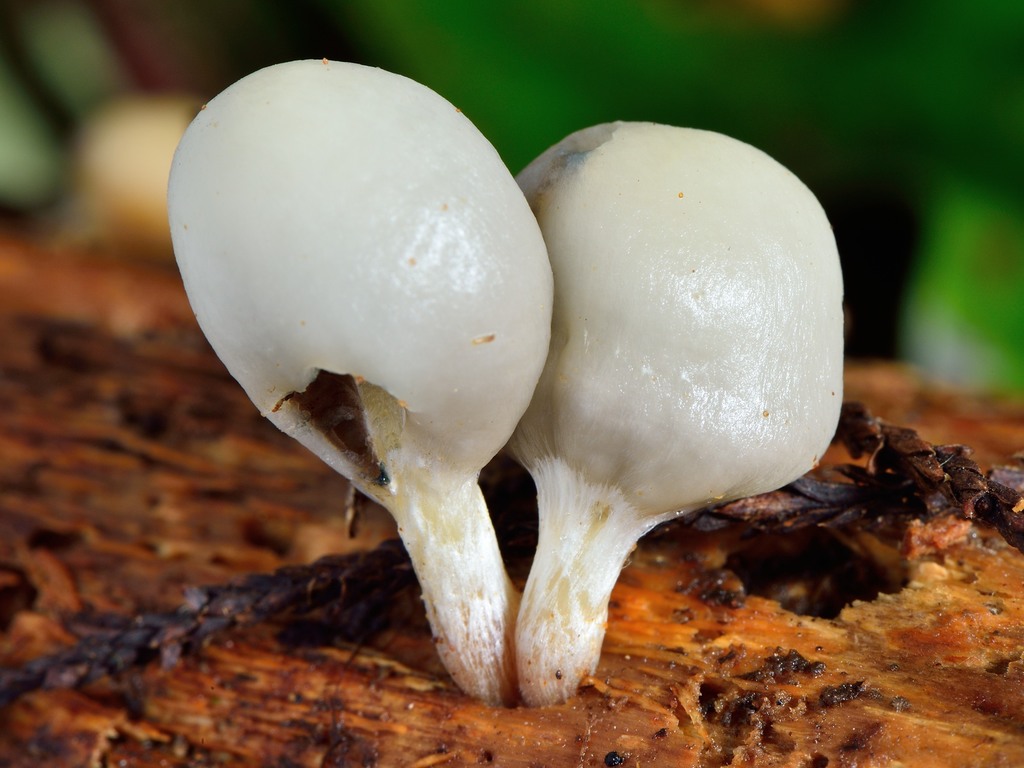 Psilocybe weroroa is a strange, confusing, and not very well-known psychoactive mushroom native to the North Island of New Zealand.

First of all, there’s some disagreement as to weather it should be in the Psilocybe genus at all. It used to be known as Weraroa novae-zealandiae, until someone discovered that it’s so closely related to Psilocybe cyanescens that the two really should be in the same genus. The name Psilocybe novae-zealandiae was already taken, so the fungus was re-named Psilocybe weraroa. However, there is an argument that the psychoactive Psilocybes don’t belong in the same genus as the inactive Psilocybes, and if the genus is split, it is the psychoactives that will have to find a new name, thanks to the rules of scientific nomenclature[i]. In that case, this little mushroom could end up in the Weraroa genus again, along with many popular magic relatives. Stay tuned.

Second, this is a weird-looking mushroom, rather as if a typical magic mushroom decided to become a puffball instead and made it about halfway. It’s not the only such “pouched mushroom,” but it certainly doesn’t resemble the other Psilocybes.

Although P. weraroa is relatively common in its natural range, it is not well-known outside of it, and has not been used or cultivated by very many people, yet. It’s worth noting that some caution is in order—we don’t yet know whether this mushroom might carry additional health risks, at least for some users, beyond that known for the other psilocybes.

P. weroroa[ii] looks like a stalked puffball, and almost is one (remember that puffballs are simply those that share a similar structure, and that the various puffball genera are not closely related to each other) in that the cap never opens. Inside the closed cap, or pouch, is a chambered gleba that somewhat resembles gills. This growth pattern is called a secotoid mushroom or, more colloquially, a pouch mushroom. As with the puffballs, the pouch fungus group includes mushrooms that are not closely related to each other—some are actually closed boletes and have gleba featuring tube-like structures. Since the spores are never released on the wind, these mushrooms depend on slugs and other invertebrates to spread their spores.

P. weroroa has a smooth, pale brown to tan pouch that becomes blue-gray with age. The stem is white to blue-gray with a yellowish-brown base. Both stem and pouch bruise blue or blue-green. Cap and stem together are usually a bit over four inches tall. The gleba is a chocolate-brown color.

P. weroroa does share its range with a close look-alike, Clavogaster virescens[iii]. The main difference between the two is that the latter does not turn blue when damaged, but they are frequently mistaken for each other. Clavogaster virescens is not psychoactive. It is considered inedible, but whether it is actually poisonous seems unclear.

P. weroroa contains psilocybin and therefore produces the same effects that other psilocybin mushrooms do: alterations to mood, thought-pattern, and perception, plus poor coordination and balance and, often, nausea. The changes in mood are usually pleasant but aren’t always, depending largely on the mental state of the user going into the trip. Altered thought-pattern makes possible important personal insights, but actually learning from these insights depends on careful and deliberate integration and reflection after the trip. Altered perception means hallucination at higher doses, but at lower doses the effect can be subtle.

P. weroroa is said to be less visual than most other Psilocybes, while still being quite powerful in other respects[iv].

Because there aren’t very many published trip reports, it is difficult to say what typical potency for this species is. Somewhere on the light side of average seems likely. Some people say that drying substantially reduces potency, but this has not been confirmed, and some users report good results from dried mushrooms.

Many psilocybin users define five dosage levels—beginner, medium, and advanced, plus microdoses (defined as doses too small to alter perception) and heroic doses (defined as doses large enough to seriously challenge the integrity of the mind). But for any given mushroom species, the size of these doses varies depending on what kind of trip you want and what your personal body chemistry is. It’s also possible for mushrooms of the same species to have slightly different potencies, requiring different dose sizes to get the same effect.

Psilocybin is relatively safe compared to most other mind-altering substances, but its use is not risk-free. The likelihood of unpleasant, or even dangerous side effects increases with dose sizes—especially for people not used to higher doses. It’s therefore important to always err on the side of taking less than you want—taking too much could be dangerous.

P. weroroa is not widely cultivated, so cultivation techniques are not well-established or widely known. Some growers have had good results with outdoor beds or in open pots of bark chips[v], but whether it can be effectively cultivated indoors is not clear. This species feeds on dead wood in the wild, so wood, bark, or cardboard are likely to be good substrates[vi].

It is impossible to collect spore prints, because the spores remain embedded in gleba, a definite challenge. Using a sample of gleba to inoculate agar may be the best way to begin a grow, followed by several stages of transferring patches of healthy mycelium to a new agar plate in order to ensure a clean, uncontaminated sample. Colonization time is said to be quite long.

The question of whether a would-be psychonaut should buy mushrooms or grow them usually comes down to how much the user wants and what the law is in their area. In most jurisdictions world-wide, use or possession of psilocybin in any form, including the form of an odd-looking mushroom, is extremely illegal. People who want to get their hands on a large supply of these mushrooms anyway will find that growing is both cheaper of a per-gram basis and more discrete. However, getting caught with a large supply or while growing mushrooms is generally much worse, legally speaking, then getting caught with a small amount. It’s a judgment call.

However, since P. weraroa is rare and cultivation methods are not well-known, the best option might be whatever one works. That is, if you have a source you can buy from, then buy; if you get the right culture and a good cultivation method, then go for it. Perhaps the most reliable way to get your hands on this species is to go to the North Island of New Zealand and forage for it—but of course, do not forage for anything you intend to eat unless your mushroom-identification skills are top-notch. Anything less is dangerous.