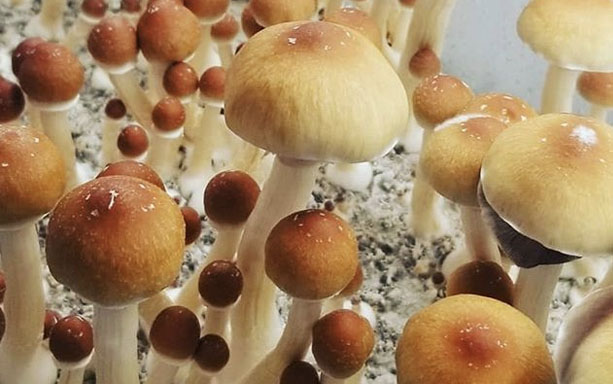 Alacabenzi[i] is a cultivated strain of P. cubensis. It’s history is a little murky, but it’s said to be a cross between and something else. It is known for the large size and lovely symmetry of its fruiting bodies, as well as for being very beginner-friendly, both for users and growers.

Alacabenzi is only one of many cultivated strains of P. cubensis, the species people most usually mean by phrases like “shrooms” or “magic mushrooms.” There are other hallucinogenic mushroom species, they’re just less popular. Most contain psilocybin, the same “active ingredient” that is in P. cubensis, but there are also a few Amanita species that are both safe to eat and “active,” thanks to a very different psychoactive substance, moscimol.

P.cubensis grows very widely in the wild, feeding on mammal dung. Although there a lot of natural variation, the mushrooms are usually medium-sized with light-brown caps. A webby partial veil protects the developing gills and tears just before spore release.

Alacabenzi’s trip[ii] has been compared to the experience of using some of the more potent cannabis strains. At low doses, users report mostly a sense of relaxation and insight. At higher doses, the visuals are still seldom dominant, but reality may seem to twist, causing difficulty with physical balance. First-time users especially should avoid moving around, because of the risk of falls in case the dose is a little more potent than planned.

Psilocybin concentration varies between strains, but it’s not known for sure whether other aspects of the user experience vary. That is, the trips themselves certainly vary, since the biochemistry and mental states of users vary—a trip is an interaction between mushroom and user, so the state of the user influences the direction of the trip. But whether part of the variety of experience is due to variation on the part of the mushroom, and whether each strain really has its own characteristic effects, is not clear. Certainly, many users insist there is a difference. Trying different strains and comparing them is part of the fun, for many.

P.cubensis and other Psilocybe mushrooms are relatively safe to use, but can carry unwanted side-effects. Nausea is common. Anxiety is also a real possibility, but can be minimized or managed through careful attention to dosage and to set and setting, and by having a sober friend on hand to provide comfort if necessary (and to help with any practical issues that may come up and be difficult for the user to manage alone). More serious problems, both psychological and physical, are possible but rare. It’s generally considered a bad idea to mix alcohol and shrooms, not because of any chemical interaction, but just because a tripping person would have trouble assessing how drunk they are and could therefore drink way too much without meaning to.

P.cubensis is also thought to have medicinal benefits, but psilocybin’s status as an illegal drug makes research difficult (on that note, please do not use any information from this article to get sent to prison).

As one of the more mellow strains, Alacabenzi could need a slightly larger dose than other strains, to produce the same effect. But a mellow experience (and hence a relatively small dose) is exactly what many users are looking for with this strain.

As to specifics, it is possible to calculate a recommended dose for p. cubensis from the user’s body weight and desired experience (a mellow high? An intense trip? A microdose?), and from the condition of the mushroom (fresh or dried)[iii]. But the result is just approximate. Not only does each strain have its own typical potency, but individual mushrooms of the same strain can differ, and the sensitivity of users also varies dramatically.

A little cautious trial and error is always called for.

Popular methods of consumption for Alacabenzi include Lemon Tek and Shroom Tea.

Alacabenzi is known to be easy to grow, very forgiving of beginner mistakes, and able to produce abundant harvests of large mushrooms. Colonization time can be a little long, especially if conditions are not optimal[iv], but then fruiting time is often quite fast[v]. Spores germinate well, and the growing mycelium resists contamination better than many other strains.

Like most P. cubensis strains, Alacabenzi will do well with almost any method, be it PF Tek, Monotub Tek, Shotgun Fruiting Chamber, or whatever else. The important thing is that whatever method is chosen, the user follows it faithfully. Inexperienced growers who try to invent their own methods without knowing what they’re doing tend not to do well.

Buying or growing magic mushrooms like Alacabenzi Cubensis each have their advantages and disadvantages. The choice depends on the user’s needs.

Per dose, growing is dramatically less expensive[vi]. A syringe full of spores, plus all the materials necessary for a grow, might cost little more than a dose or two online, and allow the grower to produce dozens and dozens of doses at home. The deal gets even better if the grower lets a few mushrooms mature and takes spore prints—the mushroom cultivator’s equivalent of saving seed. By collecting spores, a grower can keep the same strain going indefinitely, only buying additional substrate material as needed.

On the other hand, not everybody wants dozens and dozens of doses of the same strain. For novice users who don’t know whether they’ll like mushrooms, or for experienced psychonauts who want to try and compare as many different strains as possible, buying small quantities is simply more practical. Not everyone has the time, energy, or privacy for growing mushrooms in any case.

Legal risk is another issue, since in most (but not all!) jurisdictions the possession and use of psilocybin is extremely illegal[vii].

Where personal use has been decriminalized but possession is still illegal, buying a couple of doses at a time is a good option, while growing mushrooms (that is, keeping a large amount of illegal material at home for extended periods) might seem an unacceptable risk. On the other hand, where personal use has not been decriminalized, a legal loophole might make growing seem substantially safer for those with enough privacy at home.

It is psilocybin, not certain mushroom species, that are illegal—possession a Psilocybe mushroom is a crime for the same reason that possession of a jar of psilocybin is. The contents, not the jar, is the problem. And the spores do not contain psilocybin. Although some jurisdictions also have laws against possession or sale of spores, in most places they are perfectly legal and sold under the convenient fiction that they will be used only for microscopic study. That means a grower can acquire all necessary material, including the spores, without breaking the law.

Growing is more reliable as far as quality as well[viii]. While there are trustworthy, reputable sellers, but if the product has lost its potency or otherwise isn’t what it’s supposed to be, the buyer can’t do much about it. Buying is more convenient, home growers know what they’re getting.