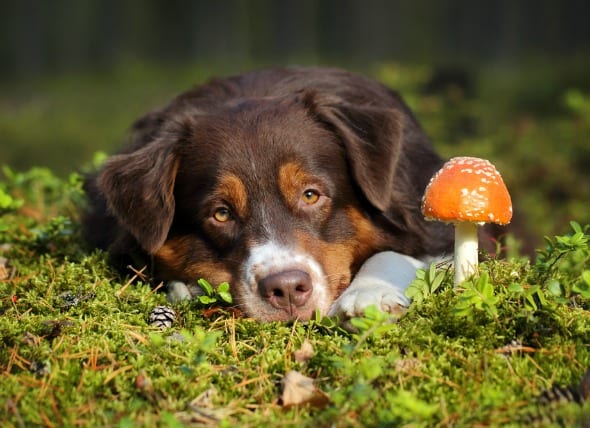 People who love their dogs naturally want to give their dogs good and healthy things. Just as naturally, dog lovers who also happen to be mushroom enthusiasts want to but the best medicinal mushroom supplements for their dogs.

Edible mushrooms are delicious and nutritious to us, and medicinal mushrooms are a popular part of alternative healthcare beginning to be backed up (at least in some cases) by modern scientific research. But humans aren’t dogs. It’s well-known that there are things most humans can eat safely (like chocolate or onions) that dogs can’t—and vice versa. It’s also true that medicine works a little differently from one species to another. You wouldn’t give your dog your pills without talking to a vet.

So should you give your dog mushrooms?

Ultimately, definitive medical and nutritional advice for your dog ought to come from your dog’s vet, not the internet. But just to get the mental wheels turning—to give you an idea of what questions to ask—read on.

Can dogs take medicinal mushrooms safely? The short answer is that they can take what we can[i].

Unlike with plants, there are no known mushrooms that are safe for humans and poisonous for dogs. They seem to react the same way we do, more or less. That means that mushrooms toxic to us are also dangerous to them. Unfortunately, some of the most toxic mushroom species around smell interesting and taste great to dogs (to humans, too, reportedly). Dogs should not be allowed to forage for mushrooms on their own, because they can and will poison themselves that way.

Another problem is that many edible mushroom species taste great cooked with onions and garlic, both of which are poisonous to dogs. It’s not a good idea to share mushrooms off your plate unless you’re sure the rest of the ingredients are safe for dogs, too. It’s also not a good idea to give dogs raw mushrooms, unless the species is one known to be safe for humans to eat raw (most are not).

But any mushroom that is safe for humans to eat can also safely be prepared for dogs, yes. If there are exceptions, they have not yet been discovered.

What Benefits Do Medicinal Mushrooms Have for Dogs?

Mushrooms probably have the same nutritional and medicinal benefits for dogs as for humans. Practitioners recommend the same species for the same reasons to both human and canine patients. The tricky thing is there is very little research on the effectiveness of medicinal mushrooms in humans. There is even less for dogs.

In most cases, the existing research supporting the medicinal use of mushrooms is extremely preliminary. There might be encouraging studies that used experimental mice or rats or, in some cases, human tissue cultured in labs. Chemical studies identify the presence of substances thought to have certain benefits. Folk traditions thousands of years old recommend certain treatments (and are sometimes right and other times very wrong). For a few species, there are clinical experiments in human beings (rarely in dogs), but most of these are still small and preliminary. All of this is not to say that mushrooms don’t work—on the contrary, it is reason to believe that they probably do, it’s just that there are still a lot of unanswered questions. Basically, the jury is still out.

What benefits a person can expect from mushrooms (for themselves or for their dog) depends on the species of mushroom. However, among the most popular, best-researched species, the following possible benefits stand out:

Choosing the Best Mushroom Supplement for Your Dog

The best way to choose which medicinal mushrooms to give a dog is to ask a vet. But not every vet will be able to answer. Most vets do not know much about mushrooms and may be openly skeptical or dismissive, but there are holistic practices that combine standard veterinary medicine with alternative therapies, and many of these have experience with mushrooms.

First, none of the above-mentioned conditions (cancer, diabetes, and so forth) should be tackled by a non-expert alone, no matter how effective mushrooms are. And when a dog is being treated by a vet, the vet has to be made aware of all aspects of the dog’s care, because otherwise a mushroom remedy given at home could interact badly with a drug given by the vet.

The principle that mushrooms don’t replace doctors applies to human health, too, but dogs carry an added complication—they can’t talk.

Humans know how we feel, and we can learn how to self-diagnose to some degree. Dogs, too, know how they feel, but they won’t tell us. Most try to hide their pain and discomfort until things get really bad. The signals they do give are often ambiguous. Vets have the experience and the diagnostic equipment necessary to figure out what’s really going on, and only with an accurate diagnosis is choosing the right treatment even possible.

But if the vet doesn’t prescribe a specific brand of mushroom supplement, it’s important to know what to look for.

With rare exceptions, medicinal mushrooms are best taken as powdered extracts or as teas—in whole mushrooms, the medicinal substances may not be concentrated enough, or may be hard to absorb. There are medicinal mushroom products made for dogs, though those made for humans are likely to be useful, too. But since mushroom products are not regulated the way FDA-approved medications are, it’s up to the buyer to make sure the product is safe and effective.

The rules for choosing quality mushroom products[ii] are the same, whether the intended beneficiary is human or canine.

The Best Mushroom Supplements for Dogs

Among the most frequently recommended mushrooms for dogs are the following[iii]:

Reishi is a tricky medicinal because what was once thought to be one species is actually several, and no one knows yet how these species might differ in terms of their potential benefit. There is also some evidence that it might be toxic for humans under some circumstances. Nevertheless, it remains popular for strengthening the immune system and may help with anxiety in dogs.

Maitake is also popular for immune support and for help with cancer treatment (never attempt to fight cancer with mushrooms alone!).

Cordyceps is actually a group of species, all of which kill and then grow from the bodies of insects. They are considered useful for supporting the metabolism.

Turkey tail, named for the colors of its fan-shaped fruiting body, is considered useful for fighting cancer and for immune support.

Lion’s mane, and possibly some of its close relatives as well, promotes the production of substances associated with brain growth. It is therefore sometimes used for dogs experiencing cognitive dysfunction (the canine equivalent of dementia).

Individually those are all great medicinal mushrooms for dogs, but we recommend an “all around” mushroom supplement for pet health. Our favorite is Noomadic Herbals, Mushroom Total. It contains, Reishi, Turkey Tail, Lions Mane, Chaga, and Cordyceps.

[iii]     Shields, T. (n.d.). Everything You Need to Know About Choosing the Best Mushroom for Dogs.

7 thoughts on “Medicinal Mushrooms for Dogs: Which Supplement is the Best?”