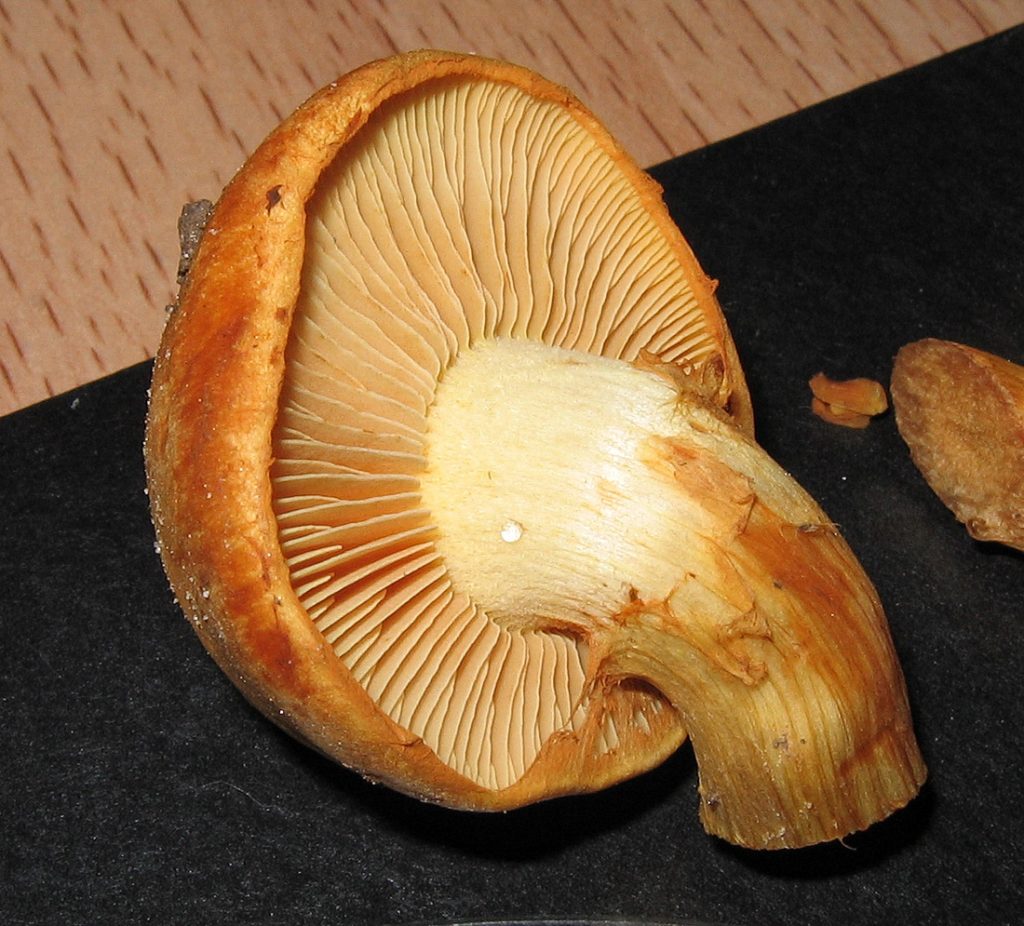 Throughout the world, there are thought to be approximately 150 species of Gymnopilus mushrooms, 75 of which are thought to grow in North America. From all these mushroom species, only ten have been shown to be psilocybin-active. Gymnopilus validipes is one such psilocybin-active, weakly to mildly psychoactive mushroom. Like its relatives, G. validipes is a medium to large, wood-loving mushroom, with characteristic rusty orange to yellow-orange spore print. [i]

A word of caution regarding the use of morphologic characteristics of this and other species of the Gymnopilus genus for their identification: a specific member of this species cannot be reliably identified with any scientific accuracy based solely on their morphologic features. Nonetheless, below are offered the morphologic features of Gymnopilus validipes.[ii]

Cap: The size of the cap ranges from 4 to 30 cm in diameter. The cap is generally convex, but as it ages it expands, becoming mostly flat at maturity. Coloration of the cap is a bright yellowish-orange while young, but at maturity, it takes on an orangish, yellowish or reddish brown color. The cap has a dry surface, and is covered with minor scaly plaques or orange-brown fibrils. When young, the cap margins are deeply curved inwards and can display thin strand-like remnants of the partial veil, but with age, the margin becomes curved downwards and then ultimately flattening at maturity. The flesh of the cap is mostly whitish but can be slightly yellowish near the gills.
Gills: The gills are adnate (broadly attached to the stem) to uncinate(abruptly concave near the point of attachment at the stipe, resembling the shape of a hook), thick, and close to sub-distant. In color, they are yellowish white becoming brownish-orange as spore mature.
Stem: The stem is 10 to 25 cm long and 2.5 to 5 cm thick. It is solid, hard, and strong, often with a dilated middle segment and tapering off towards the base. The stem is yellowish-white to brownish or yellowish orange in color; often matching the color of the cap. There is a cobweb-like partial veil cortina, leaving behind a ring-like or collar-like annular structure.
Spores: The spores of Gymnopilus validipes are orangish-brown. With regard to size and shape, they are 7.5 to 10 by 4.5 to 5.5 micrometers and are ellipsoid while looking at it from the side, while ovoid when observing in face view.
Spore print: The spore print of this species is characteristically orangish brown.
Flavor and Edibility: Although Gymnopilus validipes is purported to have a bitter taste, it is said to be more mild and agreeable compared to other members of the Gymnopilus genus. However, some mycologists report that even if members of the Gymnopilus genus are meant to taste a certain way they often do not, and never recommend “taste testing” as a means of species identification as it is dangerous.
Odor: The odor of this species is said to be pleasant.
Habitat: G. validipes can be found growing gregarious (open clusters) or cespitose (closely clustered with closely packed/fused stems, often arising from the same rootstock) on hardwood logs, stumps, or debris.
Range: This species has a wide range of distribution throughout the majority of North America. In the United States, it can most commonly be found growing east of the Great Lakes, in states such as Ohio, Pennsylvania, New York, Vermont, and others. Furthermore, according to some mycologists, this particular species can also be found in central and northern Europe.

Perhaps the most important look-alike to this particulars species and the others from the genus of Gymnopilus is the mushrooms from the genus of Galerina. The genus of Galerina contains several deadly poisonous species such as Galerina marginata. Generally speaking, Gymnopilus species are larger than Galerina, they have similar colored spores (rusty orange, orangish-brown) and can have rings. As such, there is a great similarity to the untrained eye, and confusion between the two could be deadly. This is also one of the reasons why using the bitterness of Gymnopilus is advised against for their identification. [iii]

Gymnopilus validipes, as mentioned before, is a psilocybin-active, weakly to mildly psychoactive mushroom. As such, its consumption will produce effects characteristic of psilocybin and psilocin intoxication.

Psilocybin and psilocin in low doses alter the user’s perception of reality and time as well as their thought and mood. Users may experience auditory, visual, tactile, gustatory and olfactory hallucinations. One frequent effect characteristic of psilocybin consumption is synesthesia, which refers to people “seeing” sounds or “hearing” colors. However, these are highly subjective experiences and effects vary from person to person.

Despite this, many individuals use psilocybin-containing mushrooms for a variety of cultural and spiritual ceremonies, and their use is even being considered in the medical community for terminally-ill patients.

Gymnopilus validipes is weakly to mildly potent. According to one mycological text, it contained 0.12% psilocybin, but unfortunately, its psilocin content was not determined.

Calculating dosages of psilocybin and psilocin contained within any mushroom is quite difficult and never an exact science. The concentration of these hallucinogenic compounds contained within Gymnopilus validipes is highly variable. This variability in dosage can be attributed to the state of the mushroom(fish vs dried), its age, and the environment in which it was grown. Furthermore, dosage variability is also dependent on the unique physiology(metabolism, absorption, excretion) of the user and this can influence dose-response as well as toxicological profile.[v]

However, the dosage-effect relationship is once again highly variable. As such, it is best to be cautious and start with small doses and see how these affect you. From there, the dosage can be adjusted to achieve the desired effect.

Popular methods of consumption for Gymnopilus validipes include Lemon Tek and Shroom Tea.

There is no information about suitable spawn mediums, methods of inoculation, colonization times, incubation, triggering of fruiting, or harvesting for Gymnopilus validipes specifically but you can use our general guide on how to grow magic mushrooms.

Fortunately, certain edible species of the Gymnopilus genus have been cultivated for consumption. One particular study[vii] that looked at the cultivation requirements of the edible species Gymnopilus pampeanus found that the optimal spawning temperature was 25°C, grew best on un-supplemented sawdust and was partial to sunlight.  It can be reasonably assumed that these variables can also be suitable for the cultivation of Gymnopilus validipes.

Psilocybin and psilocin are listed as Schedule I substances under the United States Controlled Substances Act, making it illegal to buy, cultivate or possess psilocybin-producing mushrooms for either personal consumption or distribution.[viii]

However, in several states, it is legal to grow psilocybin mushrooms for personal use. Therefore, it is best to check your local rules and regulation regarding purchasing, growing, and/or consuming psilocybin-containing mushrooms, such as Gymnopilus validipes.

Gymnopilus validipes is considered to have low toxicity. However, the user’s physiologic variability in its absorption, metabolism, and excretion make toxicity variable from person to person.

The same can be said about the safety of its use. These mushrooms do not produce predictable physical and psychological effects, which makes evaluating their safety difficult. One particularly dangerous effect of psilocybin consumption that brings the safety of its use into question is strong emotional destabilization and hallucinations that can follow its use, leading to risky behaviors and fatal accidents.

Furthermore, the safety and toxicity of these mushrooms can be “exaggerated” if consumed with those substances that have “similar” effects on a user’s mood, thought, and behavior, such as cannabis, amphetamines, or alcohol.

Lastly “bad trips” and “flashbacks” warrant a mention when discussing psychoactive mushrooms. “Bad trips” refer to frightening experiences characterized by hallucinations, illusion, panic attacks, anxiety, loss of boundaries, and derealization which are experienced by the user, particularly when high doses of psilocybin-containing mushrooms are consumed. “Flash-backs” are spontaneous recurrent episodes during which the individuals experience acute effects of psilocybin without having consumed anything. Flashbacks can occur weeks or eve months after the initial episode of use and can be a source of stress. In order to ensure you have a good trip it’s good to have an idea of what you want to do when on shrooms.

[i]       Stamets, P. (1996). The Minor Psilocybin Genera. In Psilocybin mushrooms of the World: An Identification Guide. essay, Ten Speed Press.