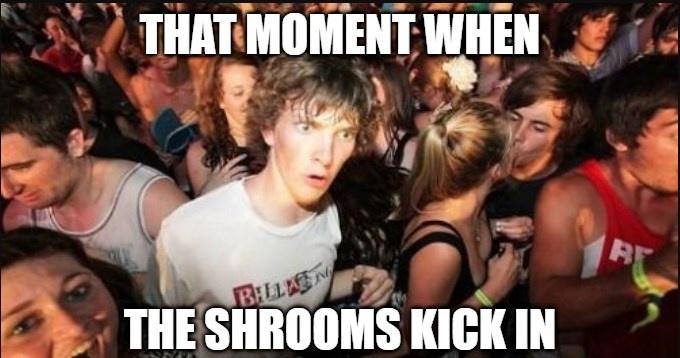 So, say you’ve taken some magic mushrooms (not that we condone doing so in jurisdictions where it’s illegal), and it’s been almost half an hour, nothing special is happening, and you’re wondering if maybe your dose was a dud, and maybe you should take more? Or maybe you’ve heard it takes an hour for the effects to start, which gives you just enough time to drive to the store and back.

If you already know about psilocybin, you know both hypothetical scenarios lead to disaster. But maybe you’re a newbie and you don’t know—there’s no shame in that, but we’d rather you not have disasters. Knowing what to expect will keep you from overestimating or underestimating how much time you have before things get trippy.

So, the short answer is anywhere from ten minutes to about an hour. For the longer, more nuanced and complete answer, read on.

By the way, it’s really much safer to have some guidance from an experienced friend for your first psilocybin experience—actually, it’s much safer and more rewarding if you have a guide, or at least a sitter, for every trip, for all sorts of reasons. And your guide should be able to tell you everything we’re about to cover in this article and more. But there’s really no harm in hearing good advice and important information twice, and we’re aware that of course some people do embark on their first trip alone—and, like we said, we want to help you avoid disasters.

Note: This article is about how long it takes to notice the effects of Shrooms, not how long they stay in your system or how to beat a drug test.

What Determines How Quickly the Trip Will Start?

So, we just said you can expect the effects to come on anywhere from ten minutes to an hour after swallowing your shrooms. But that’s a big range—is there any way to narrow it down a bit more? What makes the difference between a short wait and a long one anyway?

Generally, the body needs time digest the mushroom and then convert the psilocybin to psilocin, the chemical form that actually causes the trip. Anything that either speeds or slows digestion or speeds or slows conversion will change how long you have to wait.

Below is a series of factors that might—or might not—make a difference.

Your Dosage and Body Weight

It might seem obvious that the more you take, the faster the trip starts—except it doesn’t work that way. We decided to cover the least relevant factor first.

Imagine you are some sort of magic stomach sprite, digesting mushroom and then converting psilocybin (I’m picturing a pointy-eared person sitting at a desk working some sort of steam-punk-style digesting machine). You are a diligent, loyal worker, so you always work at a fast-efficient pace. Now, imagine your boss comes along and dumps an extra-big pile of mushrooms in your in-box (“if you could get these done within the hour…that’d be great”). Are you going to start working faster? Of course not. You’re already working as fast as it’s reasonable to work.

Your body feels the same way.

Some people think that body weight makes a difference, but that seems unlikely, since body weight simply changes dosing—the bigger you are, the more you need to take to get the same effect. And we’ve already established dose doesn’t matter for timing (it does matter a great deal for other considerations, though).

The only way that dose (or body weight) is likely to make a difference is that if you take a low dose or especially if you take a microdose, the effects will be more subtle, and you may have trouble noticing that you’re actually under the influence. More on that, shortly.

The Species and Variety of Mushroom

Most psychoactive mushrooms contain both psilocybin and psilocin. Some contain other psychoactive substances as well. Psilocybin is not itself psychoactive, but your body automatically converts it to psilocin, which is psychoactive. While we don’t know whether anyone has performed any kind of formal testing on the subject, it stands to reason that if your mushroom already has a lot of psilocin in it, then that psilocin can get to work altering your consciousness right away (as soon as the mushroom gets digested enough). You’ll need less time to turn on.

Your experience level cannot actually change how quickly your body digests mushrooms or processes psilocybin, sorry. But your prior experience can change how you perceive your trip.

Psilocybin trips don’t turn on suddenly, like a light bulb. Instead, over the first two hours or so, the effects will gradually become more intense before reaching a peak that holds steady for a while and then drops off. Whether the come-up and drop-off are steep or gradual can vary a lot (probably based on the psilocybin/psilocin ratio), but the point is, it’s not instant. When the effects first come on, they’ll be subtle. Your body might start feeling different. You might start yawning a lot, or you could feel a little nauseated. Things might start to look brighter, more vibrant, than normal.

And if you’re not used to any of this, you might miss it, or at least not realize that the odd feeling is the beginning of the trip. Don’t worry, the effects will get stronger (how strong they get depends on the dose), and eventually you’ll notice that the walls are breathing, or something else undeniable. But by then it might be two hours or more since you swallowed the mushroom, and you’re thinking “when is this trip going to start?”

Your Set and Setting

Set and setting means your mindset going into the trip and the environment in which you are tripping. For example, are you sitting alone on a wild beach somewhere, peacefully enjoying the sound of the waves and your kinship with the gulls, or are you at a rave? Nothing, except dose size, has a bigger effect on what kind of experience you have. That’s why it’s so important to pay attention to establishing the right set and setting as you prepare for your trip.

The rave is probably a bad idea, but a low-key party with close friends or an in-depth conversation with a friend or a guide might be just as good a setting as the beach, but the thing is you are likely to be somewhat distracted. You might miss those first, subtle, odd feelings. You might not realize why your friend’s eyes look so incredibly blue right now, or why the curls of rising incense smoke look so intensely architectural. Then you say “wait, we’ve been sitting here talking for two hours, when does this stuff kick in?”

Then you realize the walls are breathing and the carpet has begun to ripple like water.

So far we’ve mostly looked at factors that don’t make a difference, although they might seem to. But it turns out how you take your shrooms does change things a lot. Remember that what causes the delay is digestion and psilocybin conversion. How you consume can change both.

The standard, original method of taking shrooms is to pop one or more mushrooms in your mouth, chew, and swallow. Do that, and you’re looking at a turn-on time of anywhere from 30 to 60 minutes. Taking edibles—that is, food prepared with shroom powder—is about the same, because remember you can’t cook magic mushrooms or the psilocybin will be destroyed. So shroom edibles are simply raw mushroom mixed with something tasty. This is generally considered the best way to take shrooms, but most people have trouble with the taste.

Making and drinking shroom tea dissolves the psilocybin (and other substances) in water, so you don’t have to do much digestion. That cuts about 15 minutes off your wait-time. You’re looking at anywhere from 15 to 45 minutes until lift-off.

Mixing shrooms with lemon juice or some other acidic drink–”lemon tek”–also cuts your wait down to 15 to 45 minutes. Now, the standard explanation is that the acid converts some of the psilocybin to psilocin so your body doesn’t have to, but nobody has actually published any sort of chemical analysis showing that to be the case. We just don’t know, yet. It’s possible lemon tek is simply another version of  shroom tea, although some users report a qualitative difference between a lemon-tek trip and a tea-trip, so it’s hard to say.

Combining mushrooms with cannabis is another way to intensify and perhaps speed up the trip, though it’s hard to put a number on the difference. Generally, mixing mind-altering substances is a bad idea unless you are very familiar with each substance on its own and have a firm handle on your psyche.

How much you have in your stomach when you take the mushrooms makes a big difference—if you have nothing but mushrooms in there, then digestion goes very quickly. If you’ve been fasting for at least a few hours prior to taking the dose, you could turn on in as little as ten minutes, though a wait of up to half an hour isn’t unusual.

Of course, eating shrooms on an empty stomach is also more likely to cause nausea or even vomiting. Drinking your shrooms, rather than eating them, might help with that, as long as your tea doesn’t contain much in the way of calories (do not make a shroom milkshake, in other words, as then your stomach will no longer be empty).

Or, you could just have a snack and wait a little longer.

If It’s Not Working, How Soon Can You Take More?

Taking too much psilocybin at once is very dangerous. “Too much” is relative, since some experienced users can take massive amounts—the so-called “heroic dose”–with no ill effects, but taking more than you are ready for could cause serious problems. In general, the risk of unpleasant, and possibly serious, side effects increases with dose size. That’s why it’s always best to err on the side of taking too little, rather than risking taking too much.

So, it makes sense that taking a second dose an hour after you took your first is a bad idea. The first dose probably wasn’t a dud after all, just a little on the slow side to come on, and you’ll end up with twice as much psilocin buzzing around in your brain than what you really wanted.

But if you think the first dose was a dud, how long should you wait to try again?

The standard answer is to wait at least two hours. But do check in with yourself first—is it possible you are having subtle effects, you just didn’t notice? Also, mushrooms don’t usually just randomly un-magic themselves. Unless you’re taking one of the species that is only psychoactive sometimes (as is true of some of the weaker Panaeolus mushrooms), if your dose didn’t do it for you, then something is likely wrong with the batch, and it might be better to hold off until you know what.

So wait at least two hours, but make sure taking more is really the right thing to do.

If you’re unsure if you took enough, use our dose calculator to double check if your numbers are right.