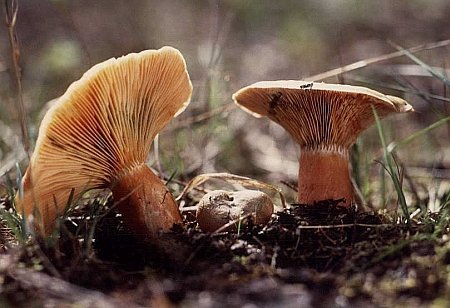 This mycorrhizal mushroom, common in Europe, is similar in habitat and appearance to Lactarius deliciosus, and was formerly thought be a variety of it.

The azulene compound 1-formyl-4-methyl-7-isopropyl azulene (11,12-dihydrolactaroviolin, show below) has been found in this species (Koul et al., 1985).

A lectin (named LDetL, dimer, MW=37,000 kDa), specific for β-D-galactosyl(1→3)-D-N-acetyl galactosamine residues was isolated from fruit bodies of L. deterrimus. This lectin, not specific to any erythrocyte phenotype in the ABO system, is postulated to be involved in recognition and specificity during the early stages of mycorrhizae formation (Giollant et al., 1993).

A thin-layer chromatographic technique has been reported for the identification and quantification of 5-methylcytosine, tryptamine, melatonin, tryptophan, indoleacetic acid, and indole in the fruiting bodies of  L. deterrimus (Muszynska, 2007).

The antioxidant activity (measured by the β-carotene/linoleic acid method) of the L. deterrimus methanolic extract at 20 mg/ml was as strong as the positive controls BHT and α-tocopherol. Although the radical scavenging activity (measured by the 1,1-diphenyl-2-picrylhydrazyl assay) was relatively low, the reducing power at 4 mg/ml was strong, as was the chelating effect on ferrous ions. This paper also investigated the quantitative yields of total phenolic and flavonoid compounds (Sarikurkcu et al., 2008)