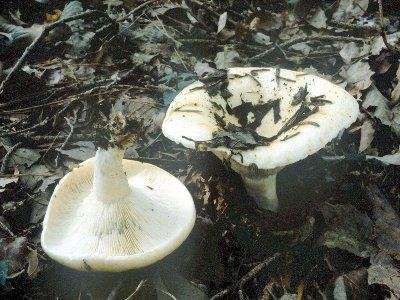 As far as I can determine, this species has only been reported from Japan, and descriptive information is sketchy. Nagasawa (1998) suggests that a more correct name is L. tottoriensis.

Three novel geranylphenols, flavidulols A, B and C (structures shown below), were isolated from Lactarius flavidulus while screening for new inhibitors of proliferation of mouse lymphocytes (Takahashi et al., 1988). The original structures determined for these compounds were later revised based on NMR analysis (Takahashi et al., 1993). This paper also reported the isolation of flavidulol D, also shown below.
The IC50 values for the concanavalin A-induced proliferation of mouse lymphocytes were determined to be 8.9 µg/ml, 4.9 µg/ml and 36.6 µg/ml, respectively, while against lipopolysaccharide-stimulated proliferation, the corresponding IC50 values were 6.7, 3.9 and 28.3 μg/ml (Fujimoto et al., 1993)

Polysaccharides extracted from the mycelial culture of L. flavidulus and administered intraperitoneally into white mice at a dosage of 300 mg/kg inhibited the growth of Sarcoma 180 and Ehrlich solid cancers by 100% (Ohtsuka et al., 1973).

Nagasawa E.
A preliminary checklist of the Japanese Agaricales. II. The suborder Russulineae
Reports of the Tottori Mycological Institute. 1998 0(36):36-71.