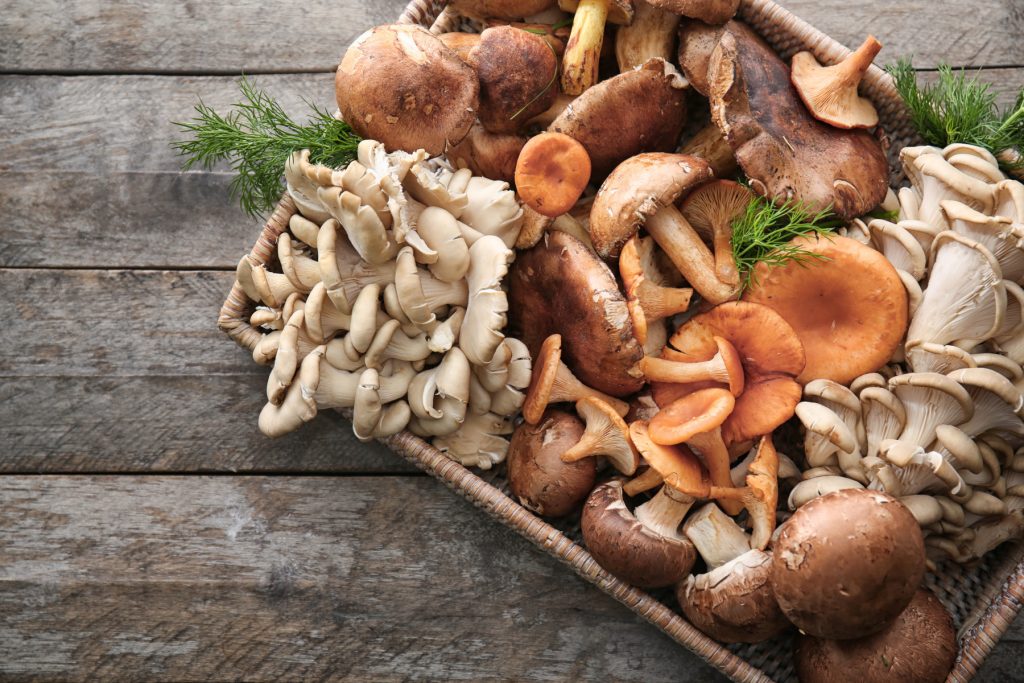 Chances are, at least some of you are thinking “FOD-what?” right now, but the rest of you are already know because you are on a low-FODMAP diet and desperately hope you’ll still be able to eat mushrooms. And the good news is you can eat some of them.

“FODMAP”[i] is an acronym for several different dietary substances that can cause problems for people with Irritable Bowl Syndrome (IBS) or Small Intestinal Bacterial Overgrowth (SIBO). An obvious solution is to avoid foods with these problematic substances, and indeed that does help.

But it’s important to understand that the low-FODMAP diet should not be treated as the latest health-food craze. For one thing, lots of high-FODMAP foods are very healthy for people who don’t have IBS or SIBO. For another thing, the low-FODMAP diet should really only be undertaken under the guidance of a qualified healthcare professional. Not everybody with IBS or SIBO should try the diet, and those who do try it must do it right or there really won’t be much point.

By the same token, everything we are about to tell you should be double-checked by your healthcare provider—this article is just to help you start the conversation about what you can and can’t have as part of your treatment plan.

“FODMAP” stands for “Fermentable Oligosaccharides, Disaccharides, Monosaccharides and Polyols.” So that’s four different substances, any one of which could cause a problem—or not. It depends on how much you eat and how your particular body works.

The idea is not to completely eliminate all FODMAPs from your diet forever. The idea is to find out which FODMAPs cause a problem for you, and then avoid foods that are high in those substances. Small servings of foods that have moderate concentrations of the substances that bother you should be OK, and of course the ones that don’t bother you won’t bother you.

The low-FODMAP diet begins with an elimination phase—stop eating ALL high-FODMAP foods for a few weeks. Once your symptoms ease up, you then add these substances back into your diet, one every few days. When one of these additions triggers symptoms, you’ll know to avoid foods that include that substance. After you’ve tried adding all the FODMAPS back in, you can move on to the third, long-term phase.

The long-term low-FODMAP diet involves avoiding only those foods that have high concentrations of the specific substance or substances that trigger your symptoms. You can even have small servings of those foods with only moderate concentrations. There is an app that can show you which foods might be problematic and what recommended serving sizes are—or you can get this kind of information from your doctor.

Which Mushrooms Are FODMAP?

Many popular mushroom species are considered high FODMAP, and specifically the White Button/ Crimini /Portabello is (these are all the same species).  So there are people who say mushrooms categorically do not belong in a low-FODMAP diet. Such people are wrong twice[ii].

First, of the almost a dozen mushrooms that have been tested, in almost all cases those that tested high did so because of manitol (Black Chanterelle is high in sorbitol, and white button mushrooms have moderate concentrations of fructans, in addition to being high in manitol). So if, after the elimination phase is over, you start adding things back in and discover that manitol doesn’t trigger your symptoms, then you can eat most mushrooms without trouble.

Second, of those mushrooms tested, several are low FODMAP, and several more are low enough that you can safely eat small amounts.

It is safe to eat a reasonable amount (a half-cup or a cup) of these mushrooms in a meal. Gorging on massive quantities might still cause a problem, but that’s pretty much true of anything.

Several others are safe in very small amounts, such as a few spoonfuls:

Note that the people who did the testing and published the list did not include scientific names. So, unfortunately, there is no way to know for sure which oyster mushroom or which black chanterelle they tested. As for “black fungus with white back,” that’s probably Auricularia polytricha, more commonly called cloud ear, but nobody really knows for sure. And several popular edibles, notably the morels, aren’t on the list at all. Apparently they weren’t tested.

The following mushrooms were tested as high or moderate for manitol, or for other FODMAPS as noted, without any exceptions for small servings:

Information on other mushroom species may be available from other sources, or you may have to experiment—or simply leave other mushrooms out.

Unfortunately, Psilocybin Mushrooms have not been tested. And since gastrointestinal upset is a common side-effect of Psilocybin, it might be difficult to tell if they are triggering IBS or SIBO or not. It seems likely they contain manitol, since so many other mushrooms do, and so it’s probably a good idea to not consume any during the elimination phase. After that? Finding out (without going to prison) is up to you.

What About Mushroom Supplements?

Mushroom supplements have, in general, not been tested. Supplements made from hot water extracts probably have such a low dose so as not to cause a problem. Dried and powdered whole mushroom would be subject to the same precautions as whole mushrooms that have not been powdered—although drying may lower manitol concentrations, as happens with porcinis.