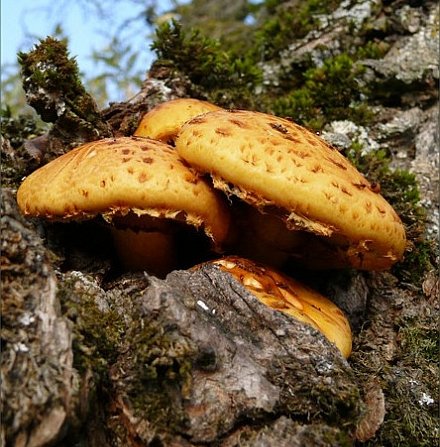 Stem: 2-5 cm long x 0.5-1.0 cm diameter, centrally or slightly eccentrically inserted, tapering towards common base, solid then fistullose, when young with well-developed, thick, fibrillose-floccose annulus, above annulus pale yellow, orange to reddish brown below, glabrous above annulus, squamulose with dark reddish to blackish brown, gelatinous squamules below, glabrous above annulus.
Taste: mild
Odor: indistinct, according to Bas et al. However, some older research has suggested that odor may be used as a defining characteristic for this species (Badcock, 1939).
Spore print: dark reddish brown.
Spores: 5-6.5 x 3-4 µm, smooth, ellipsoid, nonamyloid, amygdaliform. Further details on spore characteristics may be found in Batko (1946).
Habitat: found on living and dead stems of Fagus sylvatica, usually low on the stem or on roots and trunks; late summer to autumn; infrequent or rare.
Edibility: inedible.

Methanol extracts of P. adiposa fruit bodies were shown to inhibit the enzyme β-hydroxy-β-methyl glutaryl coenzyme a reductase (HMG-CoA reductase), a rate-limiting enzyme in cholesterol biosynthesis, by 55.8%. Solvent extraction and column chromatography were used to obtain a purified product, identified as stigmasterol, that had an IC50 of 6.8 µg (Yu et al., 2007).

The authors conclude that the submerged cultivated mycelium of P. adiposa could be considered a good source of protein.

Spiroaxanes are sesquiterpenes with a spiro[1,5]decane ring system; the canonical spiroaxane is shown below.  These compounds have been isolated from a variety of marine sponges. Recently, a novel spiroaxane (15-hydroxy-6α,12-epoxy-7β, 10α H,11βH-spiroax-4-ene) was isolated from the culture broth of  P. adiposa (Liu et al., 2008).

A variety of compounds have been isolated and purified from P. adiposa using column chromatography and and variety of spectroscopic techniques, including:

Both 1-linoleic-2-olefin and stigmasterol were shown to have weak cytotoxicity against P388 murine leukemia cells (Chung et al., 2005).

Polysaccharides extracted from the mycelial culture of P. adiposa and administered intraperitoneally into white mice at a dosage of 300 mg/kg inhibited the growth of Sarcoma 180 and Ehrlich solid cancers by 70% and 60%, respectively (Ohtsuka et al., 1973).

The antitumor potential of P. adiposa was later corroborated in a Korean study using an antitumor screening test involving Sarcoma 180 cells transplanted into mice. Mice which were injected with a million Sarcoma 180 cells, and then one day later injected with the alcohol-precipitated polysaccharides from a hot-water extract of the fat Pholiota (at a dose of 20 mg/kg body weight per day for 10 days) had an inhibition ratio of 27.3%, compared to the mice that didn’t get the mushroom extract (Chung et al., 1982). Furthermore, it has been shown that treatment of Sarcoma 180 tumor-bearing mice with P. adiposa polysaccharides resulted in decreased tumor weights, increased carbon particle clearance and phagocytic indices, and significantly higher serum levels of TNF-α and IL-2, compared with untreated controls. The authors suggest that the anti-tumor activity of P. adiposa polysaccharide is related to immune system enhancement (Zhao et al., 2007)

Researchers used a combination of the herb Lycii fructus and P. adiposa to produce a traditional Korean rice wine with antihypertensive properties (Kim et al., 2006).  The addition of  1% L. fructus and 0.1% P. adiposa fruiting bodies into the mash prior to fermentation produced a wine which had an antihypertensive ACE inhibitory activity of 82%.

Investigating the effect of a P. adiposa extract on fat mass in hyperlipidemic mice on a high-fat diet, one study concluded this mushroom may have potential for use as a functional food that can act as a prophylactic against hyperlipidemia. Although the extracts did not cause any significant change in the total triglyceride contents nor the epididymal fat mass, the retroperitoneal fat decreased significantly decreased in mice on the high-fat diet (Cho et al., 2006).  Excessive retroperitoneal fat mass is typical in males with upper-body obesity (Arner, 1997).

A presentation from the fourth International Medicinal Mushroom Conference discusses the antioxidative properties of superoxide dismutase from P. adiposa.