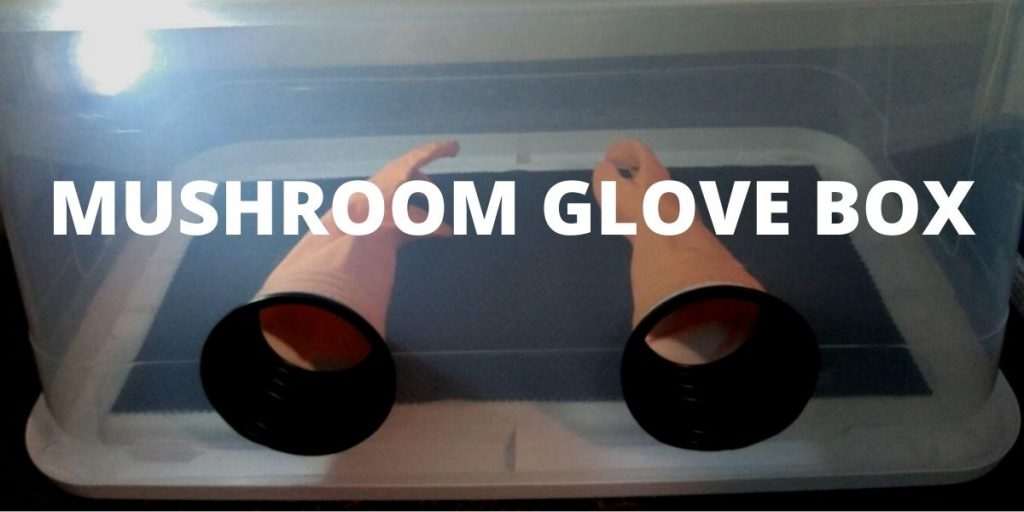 Contamination can be a real problem with mushroom cultivation—it’s like the problem of weeds in a vegetable garden, except that once bacteria or mold get into a mushroom grow, there is no way to pull them out again. You just have to start over. If you’re just inoculating jars with syringes of liquid culture purchased from someone else, preventing contamination can be a simple as using a pressure-cooker and a lighter. But if you’re working with agar or making your own liquid culture or otherwise exposing living fungal material to the open air, the risk can be very high. Strict hygiene becomes the necessity and sterile working conditions the ideal.

That’s when a mushroom glove box comes in handy.

What is a Glove Box?

A glove box is, essentially, a box with an air-tight lid and two holes in the side where gloves are permanently attached to the rims of the holes so you can put your hands in the gloves and reach in to work without allowing any air exchange between the inside of the box and the rest of the world. The idea is that you completely sterilize the box and then close it up so it stays sterile while you work. These boxes are used for mushroom growing, medical research, and any other application where either keeping contaminants out or keeping fumes or infectious agents in is critical. Professionally-made glove boxes can be purchased, but it’s not difficult or expensive to make one at home[i]. Basically, you build a still-air box[ii][iii] and add gloves.

A glove box is not the only option for making a small, sterile working area. There are also still-air boxes and laminar flow boxes. Plus, some people have an entire “clean room,” a good option for those growing very large crops (for example, culinary mushrooms in quantity for sale to restaurants and grocery stores) whose early stages don’t fit in boxes of any type.

Still-air boxes are not sealed; some air can get in and out, but because the enclosure minimizes air movement, the chance of a stray puff of air depositing contaminants in your project is extremely low. A laminar flow hood[iv] also isn’t sealed. Instead of preventing air movement, the flow hood controls air movement, so that air only moves through in one direction. Laminar flow hoods used for mushroom cultivation have an intake duct with an air filter on it so that clean air enters the workspace and then exists towards the user. A flow hood desired to protect the worker from the project (for example, if the work involved toxic fumes) would move the air the other way, drawing it in past the user and then sucking it out through a filter.

Glove Boxes Vs. Other Options

Frankly, most growers don’t use glove boxes. They use still-air boxes or laminar flow hoods. A glove box is a great option for a project that absolutely can’t have any air exchange at all (for example, a scientific experiment that can only be conducted in an atmosphere of pure nitrogen), but it’s not usually necessary for mushroom cultivation, and does have some drawbacks: working through the attached gloves is uncomfortable, tempting users to hurry and possibly make mistakes; gloves can cause clumsiness, another source of mistakes; the moving gloves in the sealed box can cause a lot of air currents, so if any contaminants are present, a stray breeze can easily carry them where they shouldn’t go; and flame cannot be used inside a glove box.

That being said, glove boxes do work when used properly, and some growers prefer them.

How to Make a Glove Box

While professionally-made glove boxes can be very intricate pieces of machinery complete with filters and valves and so forth, a basic glove box actually requires very few materials and very few steps to make.

Take the following steps in an area with plenty of ventilation, as you will be melting a little plastic and do not want to breathe those fumes.

Note that some people use knives, scissors, or a saw attachment on a drill to cut the arm-holes, but those methods increase the chance that the plastic will split. Safety also gets just a little more difficult.

How to Use a Glove Box

Glove boxes only work when used properly. Begin with good planning. You’ll want to avoid getting all set up with the box sealed shut only to realize you forgot to put some necessary item in there. Likewise, make sure all the containers whose contents you want uncontaminated have lids for when you take them out of the box. Also, you’re going to have a box full of alcohol fumes with no ventilation—under NO circumstances should you use flame inside the box. You’ll have made a small bomb.

Now, planning accomplished, you are ready to get to work.