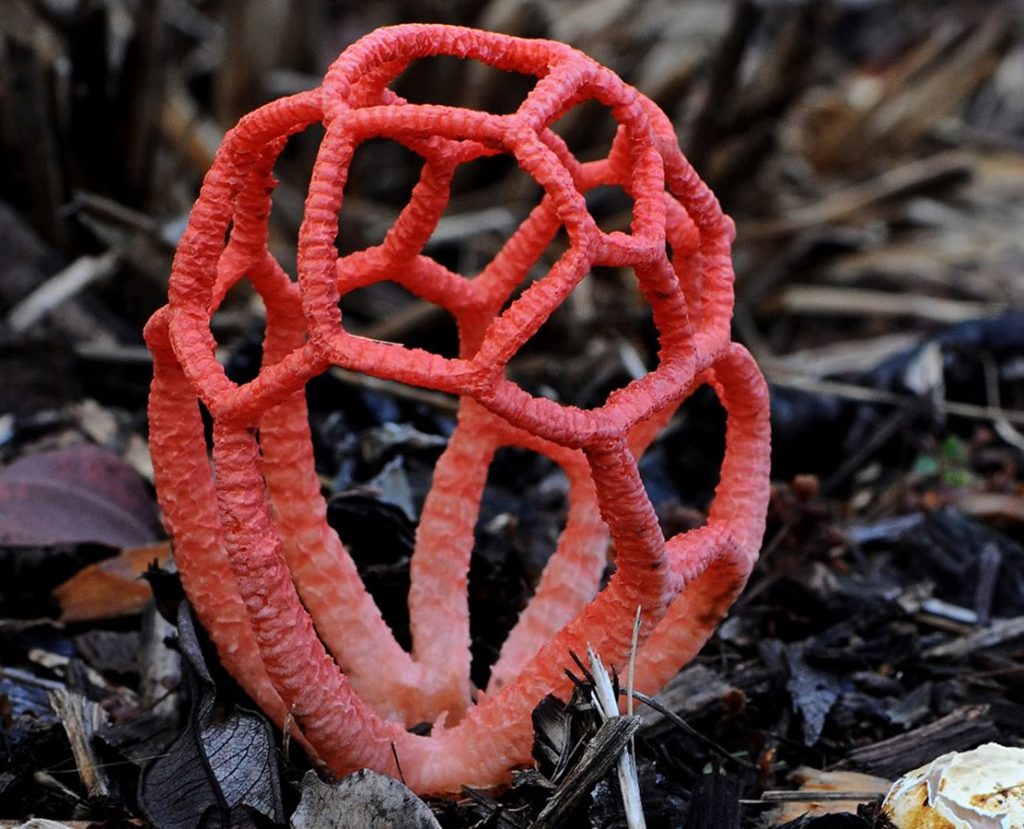 Clathrus ruber is one of at least two very different-looking species that are often called basket stinkhorn.  Let’s leave the other one for another day. The fruiting body of this one is, indeed, stinky, but it’s its remarkable shape that draws attention. The species was first named growing around the Mediterranean, but it (or possibly its look-alike relatives) grows over much of the world[i]. In many places it appears to have been introduced by humans, though the fungus is also expanding its range due to global warming[ii]. It likes warmer habitats.

While fascinating, C. ruber has no established medicinal use and is not normally eaten by anyone.

Fruiting body: At maturity, the fruiting body closely resembles a red, orange, or pink wiffle ball in both shape and size, though it is often somewhat longer than wide. It is a sphere or spheroid defined by a thick, spongy, open mesh. The branches that make up the mesh are hollow. The inner surface of the mesh is covered by a dark green-brown slime, the gleba, which contains the spores. Around the base of the ball is a whitish or brownish cup of tissue, the volva. Below that is a buried rootlike structure that connects to the underground mycelium.
Smell: Characteristically disgusting, often compared to rotting flesh. Rumored to be the stinkiest of all  stinkhorn species.
Taste: Unknown.
Spores: Cylindrical and smooth.
Spore color: The spores are mixed in with green-brown gleba, making it impossible to observe the color of the spores alone.
Edibility: Unknown.
Habitat: Eats woody debris and fruits from the ground, either singly or in groups. Common in lawns and mulched gardens.

Like other stinkhorns, the C. ruber fruiting body begins enclosed in a shell-like ball of tissue called the universal veil. This is the so-called egg stage. Slice an egg open, and the distinctive shape of the unexpanded mesh is visible surrounded by a clear gel and enclosing the dark gleba. In the egg stage, the gleba does not stink. As the fruiting body expands, it ruptures the egg “shell,” leaving the cup of tissue, the volva, at the base.

The spores of C. ruber are distributed by flies. The insects, attracted by the strong, rot-like, scent, walk on and eat the spore-containing gleba, leaving spores on the next surface they walk.

Curiously, the fruiting body expands from the egg stage to full-size within only a few minutes, then shrivels and collapses after about 24 hours. Within a few days, no sign remains of the flush at all[iii].

As distinctive as C. ruber looks, there are other fungi whose fruiting bodies have an open mesh structure[iv]. Important details to watch for include the shape and thickness of the branches of the mesh, as well as their color and the presence or absence of grooves or fringes. Some populations currently identified as C. ruber might actually be another, undescribed species. Most of these similar-looking species do not share the same range.

In its egg stage, C. ruber could conceivably be mistaken for the eggs of other stinkhorns, the eggs of Amanitas, or certain puffballs. Slicing the egg open should reveal its identity in most cases, though doing so prevents that specimen from maturing.

The name, basket stinkhorn, is also sometimes applied to Phallus indusiatus, a related species with a more classically mushroom-ish shape; its “basket” is simply a wide skirt of open mesh that extends from just under the cap[v].

It is unclear whether C. ruber has any benefit, other than its talent at decomposing wood and looking remarkable. Some writers refer to it as edible, others refer to it as poisonous, but nobody seems to have any personal experience either way. Many stinkhorn species are edible, especially in the egg stage. Some are even considered choice in some cultures (Americans tend not to like stinkhorns of any species). But very few people are eager to taste-test something that smells as extravagantly bad as stinkhorns do. C. ruber is not used medicinally, either, nor is there any research suggesting it might have medicinal uses—at least not yet.

Since the species is not used medicinally, it has no dose.

This species is not known to be toxic, but it’s not known to be safe to eat, either. Persons interested in trying C. ruber as food should exercise caution, particularly with identification; accidentally eating the egg of, for example, the wrong Amanita species, could prove deadly.