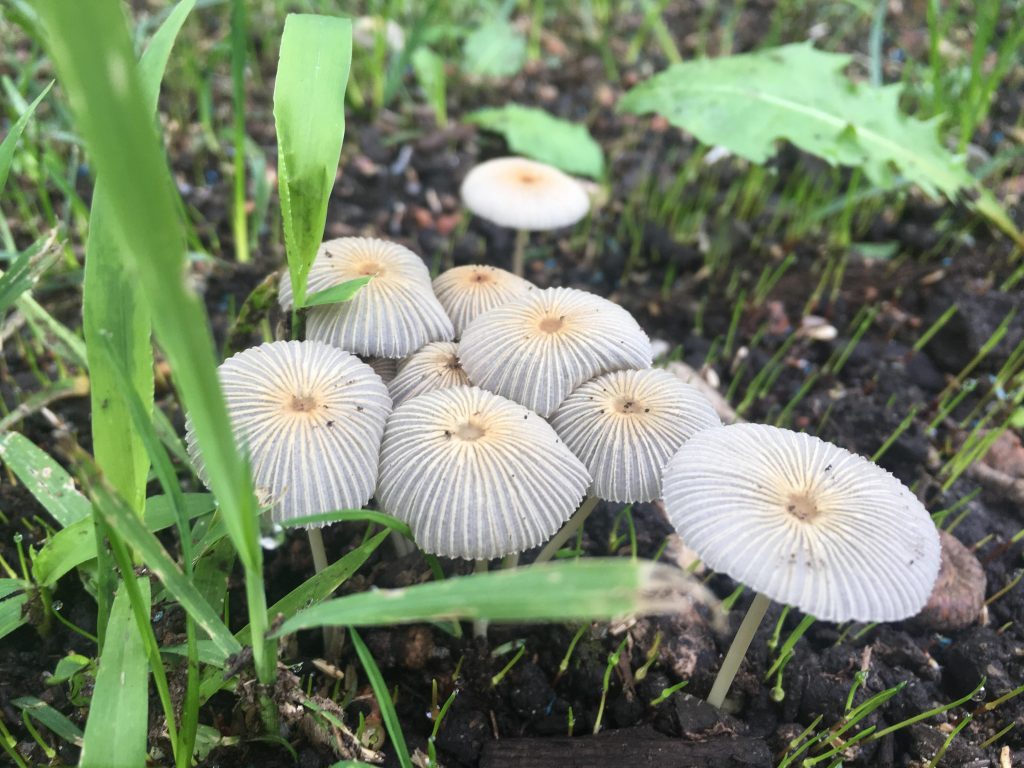 “Pleated inkcap” or  is a very descriptive name for this tiny mushroom with a cap that does, indeed, appear pleated. Parasola plicatilis also has the alternative common name, Japanese parasol, refers not to the species’ origin (it is very widely distributed across multiple continents) but to the fact that somebody thought it looked like a parasol made in Japan. “Inkcap” is a bit of a misnomer; there are several similar-looking species that turn to black fluid as the spores are released, but this one does not. It ought to be called the inkless cap, perhaps.

Whatever it’s called, the fruiting body never lasts very long, growing to maturity, releasing its spores, and then falling apart and rotting away completely in less than a day.

P. plicatilis[i] has no known uses to humans. It just is. And a pretty little mushroom it is, too.

Cap: Very small (smaller in diameter than a US cent coin), shaped like a gradually-opening parasol. The upper surface is bald but deeply grooved. Yellowish or orangish at first, gradually becoming gray.
Gills: Not attached to the stem. Whitish initially, then darkening to gray, then black.
Stem: Thin and, proportional to the cap, very long—about three times long as the cap is wide. White.
Smell: Nothing distinctive for identification.
Taste: Nothing distinctive for identification.
Spores: Large and almost globular: almond-shaped.
Spore color: Black.
Edibility: Unknown.
Habitat: Eats dead plant matter. Fruits singly or in groups from lawns and other grassy areas. Prefers direct sunlight.

Sure identification requires a microscope, perhaps not surprising, given the small size of the fruiting body[ii]. The features to look for are the distinctive shape and size of the spores, and the absence of any remnant of a universal veil on the cap. The stem, too, lacks any trace of a veil remnant.

P. plicatilis has a lot of very close look-alikes, plus a number of more distant ones; it is so small that even macroscopic defining characters are hard to see. Its look-alikes include:

Generally, most Parasola mushrooms look very much alike, and thus are difficult to separate from each other but easy to separate from anything else, provided one looks closely and carefully—the very delicate structure combined with the black spore print is distinctive. However, to a casual glance, the group could be confused with any number of small, hard-to-identify, gilled mushrooms.

The genus also belongs to a larger group that includes some species that are edible, some that are hallucinogenic, and some that become dangerously toxic if—and only if—they are consumed with alcohol[iii]. A mix-up with any of these is possible, if unlikely.

P. plicatilis has no known benefits other than contributing to the delightful complexity of the universe.

Since P. plicatilis is not used medicinally, it has no dose.

P. plicatilis is not known to be poisonous, but very few people ever try to eat such a tiny thing, so it’s possible it contains toxins we just don’t know about yet. The danger of mistaking a known poisonous mushroom for this one is negligible, especially if no one tries to eat the mushroom in question.