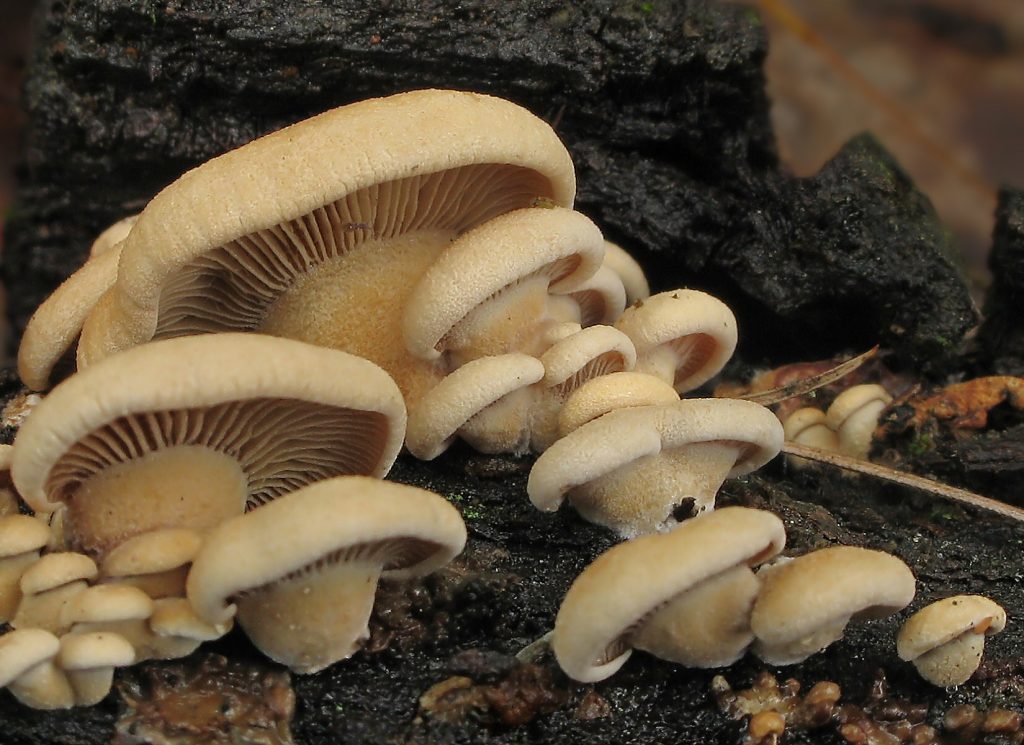 Panellus stipticus may superficially resemble oyster mushrooms, but it is not one of them. For one thing, oysters are edible. Panellus stipticus also known as The bitter oyster, oysterling or luminous panellus may not be technically toxic, but no one wants to eat it. It has some medicinal potential, but it’s not used much. The main attraction for humans here is not a practical benefit, but simply the fact that bitter oyster glows in the dark—at least sometimes.

Although this species is very widespread, it only glows in eastern North America, and only for a short period when the fruiting body is mature but not overly mature[i]. It’s often collected[ii], or even grown[iii], simply for the pleasure of seeing it glow.

Although the bitter oyster[iv] is flexible, it is not fleshy. It is small, but not delicate. Its tissue is dry and tough. It can, in fact, completely dehydrate and turn brittle but then come back to life if rained on. The caps grow in clusters.

As the name implies, the bitter oyster looks like several species of oyster mushroom, though its small size and tough texture make clear that it is no true oyster. Conversely, the tough little shelves suggest one of the smaller polypores, but a look at the underside reveals gills rather than pores (because the gills have cross-veins, they could conceivably be mistaken for very large pores, but not to a close inspection).

Several species do have a stronger resemblance, but these, too, can usefully be ruled out if the mycophile is careful. For example[v]:

Bitter oyster is not known to be poisonous (though see note under Safety), but it tastes horrible and is very, very small, so nobody bothers to eat it[vi]. The species epithet, stipticus, refers to the traditional use of this species to stop bleeding (when applied topically), but it does not seem to be used that way now, nor is it easy to find any research on whether that usage even works.

There is evidence that the fungus can remove and destroy certain types of environmental pollution and could therefor be useful for clean-up efforts[vii], but it does not seem to being put to such use now.

Of course, an organism does not need to be useful. To exist, to be alive, is enough. But there are many people who like this species simply because it sometimes glows. The color is typically a bright green.

This mushroom is not used medicinally at present, so it has no recommended dose.

Most writers describe the bitter oyster as non-toxic. At least one reports that it is deadly—most likely the writer in question was simply misinformed, but the dramatic range of opinion is still interesting. There are some reports that at least some populations of the bitter oyster may cause vomiting[viii]. One explanation for the notable paucity of clear information on the mushroom’s safety as food is that almost no one ever tries to eat it in the first place. It is tough, tiny, and terrible-tasting.