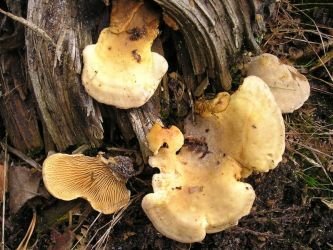 The literature reveals that this species has been a rich source of novel and interesting compounds. The medicinal potential of these biologicaly active metabolites, although barely explored, is impressive.

A new phytosphingosine-type ceramide, named paxillamide (aka 2,3-dihydroxy-N-[(1S,2S,3R)-2,3-dihydroxy-1-(hydroxymethyl) heptadecyl]tetracosanamide – see below), was isolated from the CHCl3/MeOH extract of the fruiting bodies of Paxillus panuoides (Gao et al., 2004). Ceramides – currently a hot topic in lipid research – are important in biology because of their involvement in signal transduction pathways and ultimately, in important cellular phenomena like cell growth and apoptosis.

The ecdysteroids are structurally related to the insect moulting hormone ecdysone (Vodac et al., 1998). Apparently these ecdysteroids may have taxonomic value, in that they may be used to help identify and distinguish members of the genera Paxillus and Tapinella.

Two p-terphenyl compounds, identified as leucomentin-4 and leucomentin-2 were isolated from from methanolic extract of the fruit body of Paxillus panuoides.  These compounds strongly inhibited lipid peroxidation in rat liver microsomes with IC50 values of 0.10 and 0.06 µg/ml, respectively (Yun et al., 2000).  It was later suggested the neuroprotective effect that the leucomentins have is due to their ability to chelate iron (when present with DNA and H2O2), thus inhibiting iron-mediated oxidative damage to DNA (Lee et al., 2003).

Purified lectins from T. panuoides extracts were able to hemagglutinate human red cells, with an anti-A specificity.  The reaction of anti-A agglutinin was strongly inhibited by N-acetyl-D-galactosamine (Furukawa et al., 1995).

Several of the p-terphenyl ortho-quinones described above were found to be active in assays against tumor cell cultures (Cali et al., 2004).