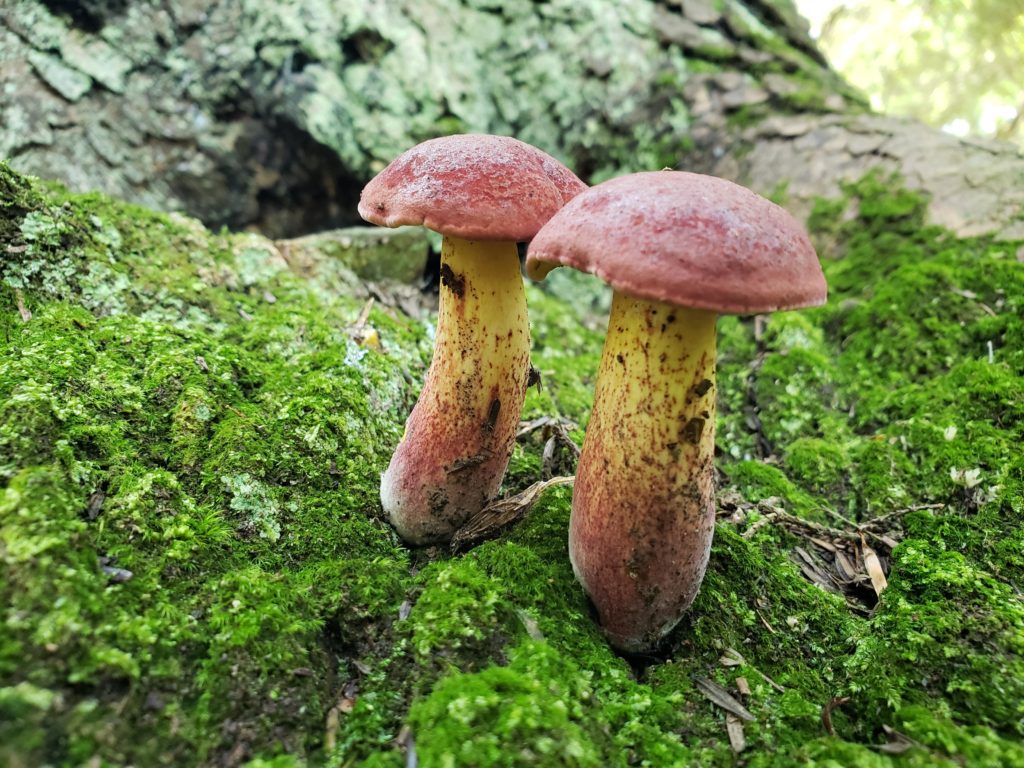 Boletus Bicolor, also known as Baorangia bicolor, two-colored bolete, red bolete, and yellow bolete, is a mushroom with an unclear taxonomy that is yet to be settled in the present.

In 1807, Boletus bicolor was firstly called Baorangia bicolor by Giuseppe Raddi, an Italian botanist[i]. Sixty-five years later, mycologist Charles Peck named the species Boletus bicolor, or two-colored bolete, due to its striking red and yellow colors. Even if Peck’s naming was deemed illegitimate, his term prevailed as the proper name of the mushroom. B. bicolor did not share characteristics with other Boletus mushrooms[ii], and in 2015, it was transferred to the Baorangia genus by Italian mycologist Alfredo Vizziniii. B. bicolor’s name originated from the Latin word bōlētus, which means mushroom, and bicolor, which means “having two colors.”

In the west, B. bicolor mushrooms frequently grow in deciduous woodlands, such as Canada, Florida, Wisconsin. In the East, they grow in China and Nepal. They do not have a distinct growth pattern, though they are often seen growing under broad-leaved trees, such as oak[iii]. They may grow in seclusion, in groups, or in clusters. Harvest time is around June to October.  Upon harvesting, B. bicolor may be consumed either dried or fresh.

Cap: 5-15cm in length; shades of red, ranges from pink to deep red
Gills: None
Stem: 5-10 cm in length; 1-3cm in width; yellow at the tip, blending into shades of red at the bottom
Smell: not distinctive, but is sometimes described to have a curry-like smell
Taste: not distinctive
Spores: almost-translucent, slightly oblong-shaped
Spore color: olive brown
Edibility: edible
Habitat: grows in isolation or gregariously on deciduous woodlands in North America, China, and Nepal; mycorrhizal

The major defining characteristic of B. bicolor is its exotic color. When fresh, the cap and stem are bright red with yellow underneath. Compared to other Bolete mushrooms, B. bicolor does not bruise easily when injured. When it does, the pore surface slowly produces a blue color, though other parts of the mushroom do not bruise that much[iv].

Other notable characteristic of this mushroom its scent’s description. B. bicolor does not generally have a distinctive smell, although some people describe it to have a smell like curry. These curry-smelling mushrooms may grow together with or near to mushrooms with indistinguishable smelliv.

B. bicolor is likely to be mistaken for Boletus pseudosensibilis and Boletus sensibilis, which can be potentially dangerous as the latter mushroom is poisonous when consumed and producesa strong blue or blue-black bruise when injured.

In one study focusing on the wild mushrooms in Yunnan Province of China, B. bicolor is found to be important for trade because of their resistance to bruising and longer storage stability[v], aside from its fleshy meat, taste, and health benefits. They are also one of the most commonly consumed mushrooms in Nepal for the same reasons[vi].

While there are a number of scientific research studies that prove the health benefits of mushrooms on the human body, exploring which applies to B. bicolor prove to be difficult because of its taxonomic challenges.  Even so, B. bicolor contains significant amount of amino acids, specifically alanine, cysteine, glutamine, and glutamic acidv,  that are components in the antioxidant properties of this mushroom; as evidenced by another study that used cytotoxicity screening and found that B. bicolor has high antioxidant activities. The same study also proves that B. bicolor has high levels of b-carotine and vitamin A. The former promotes immune function and communication between cells, while the latter plays a role in human vision. These medicinal properties found in the mushroom seconds why B. bicolor is commonly used as traditional folklore medicine in Tanzaniavii.

In a study that probed into the detailed chemical composition of B. bicolor, results show that the mushroom contains minerals like iron, magnesium, zinc, and manganeseix. According to the study, magnesium is considered to be a mineral that is a crucial factor in the bone structure and formation in the body. Consumption of B. bicolor on a regular basis may decrease the possibility of developing skeletal diseases. Moreover, results of the same study determine that B. bicolor has low crude fat content, specifically for unsaturated fatty acids[vii]. Consumption of B. bicolor is beneficial for people low-calorie diet, and more so for those with high blood cholesterol as it prevents atherosclerosis[viii] in the arteries.

While B. bicolor is a widely consumed mushroom across continents, there are limited number of controlled medical research studies that delved on testing the mushrooms on animals, more so on humans. Therefore, precise dosage information for this specific mushroom is not readily available, and more research is suggested to be done to fill this gap.

Boletus Bicolor Side Effects and Toxicity

Some guidebooks recommend avoiding blue-staining mushrooms because poisonous species may easily be confused with edible ones, such as B. bicolor. It is clear in research studies that B. bicolor is an edible mushroom, however, there are few notes that need to be heeded.

In one study which analyzed eight Boletaceae species in China, including B. bicolor, results show that the mushroom has traces of lead, but its amount does not exceed legal limits. However, opposite results yield for cadmium. Significant amount of cadmium was found in the mushroom; thus, it poses to be a risk for consuming B. bicolor in extremely large portions[ix]. It is to be noted that this result is yielded from a single study only. There are no data pointing that the cadmium content in B. bicolor mushrooms grown in other settings with different land and soil contents is the same with that of China’s. Under different soil conditions, there may be difference in the toxic mineral content and its amount in B. bicolor.

While one of the health benefits of B. bicolor is its richness in antioxidant properties that could decrease the likelihood of cancer, ingesting high levels of cadmium may actually lead to development of cancer and other life-threatening diseases. Other benefit listed was lowering the probability of developing atherosclerosis due to its low fat content. In a different study about the health risk of cadmium exposure to food, mushrooms included, results show that exposure to cadmium may initiate atherosclerosis instead and speed up its plaque formation[x] in the body’s arteries.

Aside from that, there are limited available information regarding the potentially dangerous effects of consuming B. bicolor. Since it may be consumed raw or prepared as a meal, there is a slightly higher chance for people who are sensitive to raw food to have stomach aches compared to people who are not. Other people report to have gastrointestinal disturbances after eating the mushroom too[xi]. These stomachaches are considered normal and are relieved within a short period of time after consumption.

In hindsight, individual differences of a person come into play with regards to the effects of the mushroom on the human body. The body structure, current fitness level, genes, lifestyle, beliefs, sociological factors, and natural vulnerability to certain diseases affect how one can feel its effects, whether adverse or not.