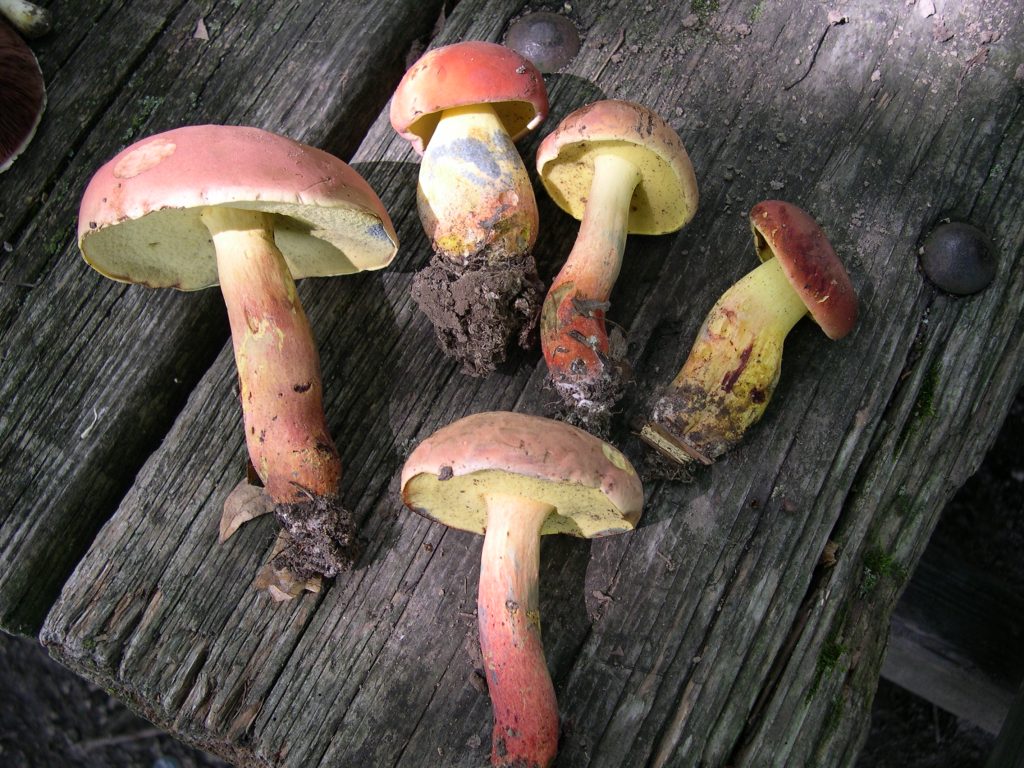 Boletus sensibilis is one of the many possibly poisonous boletes that can be found across North America. These poisonous species are orange or red on the underside of the cap and stain blue when bruised or cut.

It was for this particularly marked and profound bluing reaction that the notable American mycologist Charles Peck termed this particular Bolate species “sensibilis” or sensitive in 1880. Peck also noted that the stem of this particular species is “lemon yellow” which can oftentimes be stained pink or red. And it is these two characteristics, the profound bluing reaction and a monochromatic yellow stem that may be pink/red-stained, that have been used by mycophiles as defining features for the identification of Boletus sensibilis.[i]

Although the marked bluing reaction and a lemon yellow stem, along with a curry-like scent, are said to be the “main” features by which B. sensibilis can be identified and differentiated, this is misleading, as much variability exists among individual specimens. Boletus sensibilis does not have to smell like curry, bruise extensively, or have only a yellow stem. As such it is important to pay attention to all of its morphological features to correctly identify this poisonous species and not get it mixed up with its harmless cousins like Boletus bicolor.

Cap: The cap is 5 to 12 cm in diameter. While young it is convex, becoming broadly convex as it matures. The surface is dry and finely velvety when young but soon becomes bald. In color the cap is most commonly dirty pinkish red to darker orangish-red, fading to reddish cinnamon. Most importantly, the flesh of B. sensibilis bruises blues rapidly and strongly upon damage.
Flesh: The flesh of this species is yellow in both the cap and stem. The flesh extensively bruises dark blue when damaged or handled. Furthermore, dried specimens of B. sensibilis flesh when rehydrated in alcohol and water bruise dark blue all over again, so much so that they blue the rehydration solution as well.
Pore surface: The pore surface of this species is yellow at first, becoming dingy orangish-brownish, with olive hints at maturity. There are approximately 2 to 3 angular, 10 to 15 mm deep pore tubes per 1 mm at maturity. The pore surface, like the cap, brushes dark blue instantly when damaged.
Stem: The stem is 5 to 13 cm long ad 2 to 2.5 cm thick. It is club-shaped and smooth. The color of the stem is characteristically lemon yellow, developing a pinkie or reddish streak. Ad areas over the bottom half. The stem, like the cap and pore surface, rapidly bruises dark blue when handled or damaged.
Spores: The spores are 10-15 by 4-5 micrometers in size. They are subfusiform and smooth. When tested with Potassium Hydroxide (KOH) they turn yellow or golden.
Spore print: Boletus sensibilis has a grayish olive spore print.
Odor: This species may have a curry-like smell. The curry-like smell may be more prominent with dried specimens. However, it is worth noting that not all specimens will have this odor.
Edibility and Taste: This species is generally considered poisonous and non-edible by most credible mycological literature. Yet, there are those mycologists and mycophiles who report consumption of these mushrooms safely. The ultimate decision on the edibility rests with the individual, but as always it is best to err on the side of caution.
Habitat and Range: This species can be found growing scattered or gregariously among roots of oak and beech trees during summer and fall. B. Sensibilis can be found all over the continental United States.

Second differentiation that has to be made between Boletus sensibilis and the species of Boletus bicolor and Boletus pseudosensibilis, which represent edible Boletes that can also demonstrate a “bluing” reaction and also smell like curry. As such, the confusion between these three species is quite widespread. To alleviate this confusion below is a chart offering a comparison between these frequently confused Boletes.[iv]

As it can be seen it can be quite easy to confuse these three species with each other, especially when you factor in the variability that is present even amongst their purportedly “defining” features. Thus, its is best advice to avoid eating a Bolete you find in the woods unless you’ve done exhaustive research and are sure of its true identity.

The species of Boletus sensibilis is considered poisonous by most mycological texts. However, this “toxicity” is not experienced by all, meaning some are able to consume this mushroom without experiencing any adverse effects whereas in others it causes severe gastrointestinal upset with nausea, vomiting, dehydration, and exhaustion. As such, it is best to consider this species poisonous and avoid its consumption.