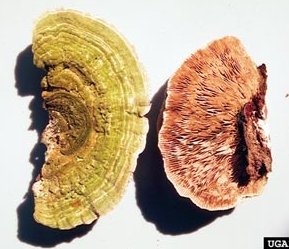 This common species grows scattered or clustered on deciduous wood such as birch, beech and oak, and less frequently on coniferous woods.  Viewed from the top, it is similar in appearance to Trametes versicolor or Trametes hirsuta, sometimes with a greenish tinge from algal growth. However, it can be easily distinguished from the Trametes because it has gills instead of pores.

Over fifty years ago the German scientist Lohwag demonstrated that fruiting bodies of Lenzites betulina could be grown on a medium of malt peptone agar with an admixture of beech sawdust (Lohwag, 1955).

Both the petroleum ether and the ethyl acetate extracts of Lenzites betulina were toxic to Hela (human cervix epitheloid) and SMMC-7721 (human hepatoma) tumor cell lines, compared to the positive control, quercetin. The methanol extract was also tested, but showed little cytotoxicity. The data in the table below gives the IC50 values – the concentration of extract needed to kill 50% of the cells. Note that the smaller the IC50 value, the greater the cytotoxic effect. The observed cytotoxic activity was likely due to fats and steroids (from the petroleum ether extract) and terpenoids (from the ethyl acetate extract). The data is summarized from Ren et al., 2006.

Two compounds isolated from the methanol extract of L. betulina, named betulinans A and B, showed free-radical scavenging activity. Because free radicals have been implicated in the origin and development of various diseases (e.g., ischemia, atherosclerosis, diabetes, rheumatoid arthritis, and cancer-initiation), betulinans A and B have potential as protective agents. In a test of free-radical scavenging strength, betulinan A was about four times as effective as vitamin E (Lee et al., 1996).

Immunosuppressant drugs inhibit the activity of the immune system. Clinically, they are used to prevent the rejection of transplanted organs or tissues, and in the treatment or management of autoimmune diseases. The methanolic extract of Lenzites betulina was shown to contain the immunosuppressive compounds ergosterol peroxide and 9(11)-dehydroergosterol peroxide (Fujimoto et al., 1994).

The antimicrobial activities of various extracts of L. betulina were examined on the test microorganisms Escherichia coli, Enterobacter aerogenes, Salmonella typhimurium, Pseudomonas aeruginosa, Staphylococcus aureus, Staphylococcus epidermidis, Bacillus subtilis, Candida albicans, and Saccharomyces cerevisiae. The L. betulina extracts were midly antimicrobial towards three of these microorganisms. The results are summarized in the table below. The compounds responsible for the antimicrobial activity were heat-stable (Yamac and Bilgili, 2006).

Polysaccharides extracted from the mycelial culture of L. betulina and administered intraperitoneally into white mice at a dosage of 300 mg/kg inhibited the growth of Sarcoma 180 and Ehrlich solid cancers by 90% (Ohtsuka et al., 1973).