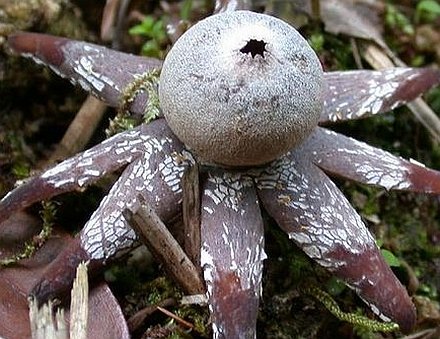 This species is easily recognizable because the exoperidium splits radially into rays to form a star-like pattern at maturity. The rays wrap around the spore puffball until rain or high humidity causes them to swell and fold downward, lifting the puffball off the ground and facilitating spore dispersal via air currents. The rays shrivel and fold up when the air dries out. It has been reported that Astraeus forms ectomycorrhizal associations with several host tree species including Pseudotsuga, Alnus, Eucalyptus and Castanea. Chakraborty et al. (2004) report that it grows in association with the roots of Chir pine (Pinus roxburghii) and sal (Shorea robusta) trees.

Polysaccharides isolated from the hot aqueous extract of Astraeus hygrometricus contained D-galactose, D-glucose and D-galacturonic acid in a 1.9:0.9:1.0 mole ratio. The linkages among the constituent sugar residues were identified as, D-Gal(p) (1,6)-linked, D-Gal(p) (1,2,6)-linked, D-Glc(p) (1,3)-linked and D-Gal(p). UA is glycosidically linked. The anomeric configurations of the constituent sugar residues were and it was found that galactose and galacturonic acid have β-configuration and glucose has α-configuration. The structure of the repeating unit of the polysaccharide was determined to be (1→6)-β-D-Galp-(1→6)-β-D-Galp-(1→3)-α-D-Glcp-1- (2→1)-β-D-GalpUA (Pramanik and Islam, 2000).

A water-soluble fraction was isolated from the aqueous extract of the fruit bodies of Astraeus hygrometricus; fractionation of this extract by gel permeation chromatography resulted in two homogenous fractions. On the basis of total hydrolysis, methylation analysis, periodate oxidation, and Nuclear Magnetic Resonance (NMR) studies, the structure of the repeating unit of the glucan from fraction I (named ASQ-I) was determined to be

This glucan combines the (1→6)-β-D-glucan and the (1→4)-β-D-glucan elements that are known to be effective antitumor agents in other fungi. Therefore, it is not surprising that the earthstar glucan was shown to stimulate splenocytes in a dose-dependent fashion (Chakraborty et al., 2004).

The second polysaccharide fraction (AQS-II) was chemically characterized a few years later by the same group. This fraction was found to contain 63% polysaccharide and 35% protein. The polysaccharide part contains glucose, galactose, and fucose in a 2:1:1 molar ratio. Using techniques such as total acid hydrolysis, methylation analysis, periodate oxidation, and NMR studies, the chemical structure of the repeating unit of the polysaccharide was determined, and is shown below (Chakraborty et al., 2007)

Three triterpenes have been isolated from the fruiting bodies. These compounds are 3-hydroxy-lanostane derivative with a D-lactone in the side chain. The structures (shown below) were named (1) astrahygrol, (2) 3-epi-astrahygrol, and (3) astrahygrone (Takaishi et al., 1987). This same paper also reported the isolation of the known steroids ergosta-7,22-diene-3-ol acetate and  ergosta-4,6,8-(14),22-tetraene-3-one.