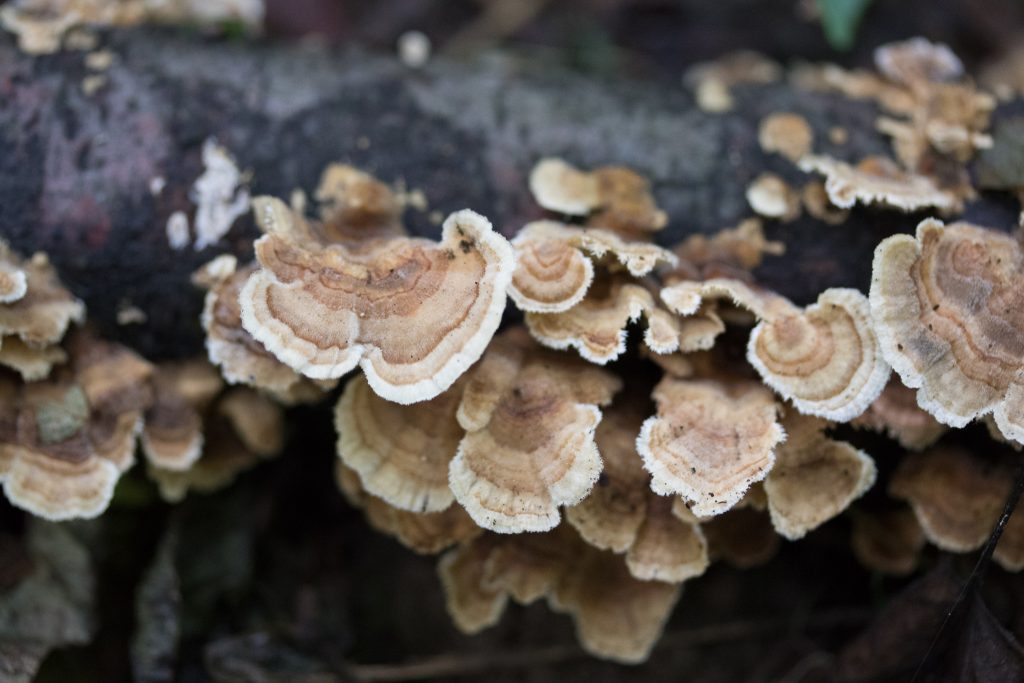 T. ochracea is also a close cousin of the more common Trametes versicolor (“Turkey Tail”), however unlike the exceedingly “versicolor” Turkey Tail, this species is much more consistent with its appearance. T. ochracea typically produces fruiting bodies with a yellow to deep orange/brown-ish upper surface (hence its name “ochracea”).[i]

From a taxonomic perspective, this species was first described as Boletus ochraceus by the German mycologist Christiaan Hendrik Persoon in 1794. It would not come by its current scientific name until 1987 in a publication by mycologists Robert Lee Gilbertson and Leif Randulff Ryvarden.

Fruiting Body: The individual fruiting bodies of Trametes ochracea are 1.5 to 5 centimeters in diameter and are semicircular or shell-shaped. These individual fruiting bodies, also called “brackets”, are broadly attached to the surface they are growing on and commonly overlap in layers forming larger, conglomerate fruiting masses. The upper surface of the brackets is usually comprised of concentric zones of various shades of ochre and are covered in fine downy or hair.
Undersurface: The undersurface of Trametes ochracea is polyporous with 1 to 4 millimeter deep, roundish pores that are spaced at 3 to 4 pores per millimeter. In contrast to the darker ochre upper surface, the undersurface of this species is creamy yellow-brown.
Stem:  This species lacks a stem.
Spores: The spores of this species are  5.5-7.5 by 2.5-3 micrometers in size and allantoid in shape, which is a fancy word for “sausage-shaped”. The surface of the spores is smooth.
Spore Print: The spore print is white.
Smell: No distinct odor.
Flavor and Edibility: Although perfectly safe to be consumed, the leathery and tough flesh of the fruiting body make this species an unlikely mushroom to be eaten by most, therefore inedible.
Habitat: Trametes ochracea is found growing on dead trunks and branches of deciduous hardwoods such as beech and oak. T. ochracea is a hardy mushroom with brackets that do not easily decay and therefore persist throughout the year. However, fresh fruiting brackets can be found during the autumn months.
Range: This species appears to be rather uncommon, but can be found across mainland Europe as well as throughout the United Kingdom and Ireland.

The confusion among lookalikes is most likely going to occur with other polyporous Tramete species, namely Trametes versicolor and Trametes suaveolens.

Trametes suaveolens can also be differentiated from T. ochracea based on morphologic features. The former species usually has a paler fruiting body and does not usually form large, overlapping fruiting masses.

Trametes as a species have been studied for possession of enzymes, such as oxidases and peroxidases, that can degrade complex organic polymers such as lignins. Whether Trametes ochracea possesses such enzymes is unknown.

The species of Trametes ochracea is not toxic and is not known to pose any harm to humans when consumed.