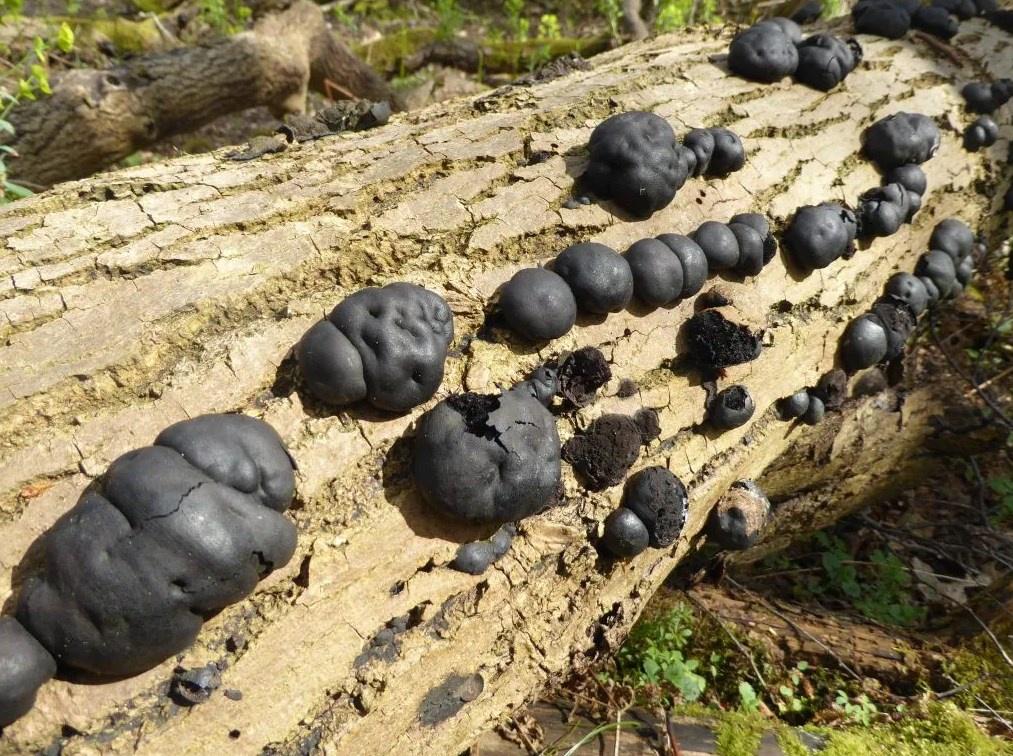 Daldinia concentrica belongs to a large and diverse group of ascomycetes, which are characterized by microscopic reproductive sac-like structures called “asci” in which meiotically-produced spores, called ascospores, are formed. [i]

Daldinia concentrica is also a prominent saprotroph that plays a pivotal role as the “recycler” of dead broadleaf trees in deciduous forests. Their cushion-like fruiting bodies can frequently be encountered on the dead but not yet decorticated trunks and on branches of trees such as ash, beech, and oak throughout the United Kingdom and elsewhere.

This species also has a very unique and interesting mythological and symbolistic background. Throughout Britain and Ireland D. concentrica has several common names such as “King Alfred’s cakes”, “coal fungus”, “carbon fungus”, and “cramp balls”. The name of King Alfred’s cakes perhaps has the most interesting background. According to legend, the great Anglo-Saxon King Alfred was forced to flee from the battle with the Dane Vikings in Somerset. After fleeing, Alfred supposedly took refuge in the house of an old woman who was unaware that he was the king and left him to mind “cakes” that were baking in the oven. Alfred, instead of watching the cakes, fell asleep and let them burn. When the old woman returned, she scolded Alfred for his negligence. Embarrassed and ashamed, it is said that Alfred scattered the cakes to get rid of the evidence. As Daldinia concentrica resembles small, burnt cakes, the name “King Alfred’s cakes” became a common eponym for this specie. Another old wives tale tells of a belief that carrying around these mushrooms would protect people from attacks of the cramp, hence the name “cramp balls”. While the names “coal fungus” and “carbon fungus” are relatively self-explanatory and derive from the coal-like appearance of the species. [ii]

Similar to mycological and historical background, the etymology and taxonomy of this species are also quite interesting. This species was first described by the notable British mycologist James Bolton in 1971 who termed it Sphaeria concentrica. However, it was not until the late 19th century that two Italian mycologists Giuseppe De Notaris and Vincenzo de Cesati reclassified this mushroom into its current genus and gave it the scientific name of Daldinia concentrica. While the name “concentrica”, refers to the conspicuous concentric zones present on the interior of the fruiting body that each represent a season’s growth and reproduction.[iii]

Daldinia concentrica is a relatively easy to identify mushroom that resembles hard, roundish lumps of coal stuck to the surface of decaying deadwood.

Furthermore, unlike most other mushrooms, D. concentrica does not possess a cap, gills, pores, or even a stem. Instead, this species has a fruitbody composed of carbonaceous stroma and flask-shaped cavities called perithecia that form within this stroma.

Fruitbody/Stroma: D. concentrica grows as an individual fruitbody that is usually 2 to 10 centimeters in diameter. Over time, individual fruitbodies may coalesce to form larger outgrowths. The young fruitbodies of this species are a matte, purple-brown in color, but with age, they become jet black with a ‘burnt’ carbonaceous appearance. With age, the stroma dries out, becomes less dense, and is easily crackable. The fruitbodies of D. concentrica, unlike other mushrooms, remain and grow on deadwood over many seasons. As such, when sectioned in half, the stroma of this species shows yearly growth rings that appear as concentric circles of silver and black. The size of the fruitbody also corresponds to the age of the mushroom. Larger the fruitbody, the older the mushroom.
Stem: As mentioned above, D. concentrica lacks a stem. Instead, the mushroom is attached to the deadwood by a broad, flat area underneath the fruitbody.
Perithecia: Daldinia concentrica lacks a spore surface, instead it has small bumps on the surface of the fruiting body which represent the necks of its perithecia. Perithecia are flask-shaped chambers that contain structures called “asci” in which meiotically-produced spores, called ascospores, are formed.
Asci: The asci themselves are approximately 200µm x 10-11µm, cylindrical, and with amyloid tips. Each ascus contains eight ascospores.
Ascospores and Spores: An ascospore is a spore contained in an ascus. These ascospores are forcibly propelled out of the ascus via the neck of the perithecium thanks to built-up water pressure. Ejected ascospores leave behind a darker area of wood around the fungus. The spores themselves are ellipsoidal and 12-17 by 6-9 micrometers in size.
Spore Print: The spore print of Daldinia concentrica is black and usually spreads beyond the edge of the mushroom. Typically a black spore print up to 3cm wide can be seen around the fungus.
Smell: No typical odor
Edibility:  Although the flesh of of this species is not poisonous, one certainly would not consider it edible as the carbonaceous fruitbody is very hard. Inedible.
Habitat: This species can be found growing in deciduous forests. They usually grow in groups on deadwood and decaying branches of trees such as ash, beech, and oak.
Range: Most commonly D. concentrica can be found in deciduous forests of the United Kingdom and Ireland. It can also be found throughout mainland Europe. Although less common it can also be seen in temperate climate areas of North America, Australia, and other countries.
Growing Season: This fruitbodies of this mushroom can be seen throughout the year. However, release of ascospores only occurs from May to November.

There are quite a few black, carbonaceous mushroom that are saprophytic and grow on dead wood. One notable example is the Brittle Cinder Fungus or Kretzschmaria deusta. Fortunately, K. deutsa does not form the the rounded fruitbodies like D. concentrica and nor does it the characteristics ring-like growth pattern inside of its stroma.

Daldinia concentrica is not widely used for much. However it does make excellent kindling to start a fire and can molder gently for a long time, hence the name ‘carbon balls’ or ‘coal fungus’.

Other than this, unless you believe that it will cure “cramps of the leg”, this species does not have much benefit or use for humans.