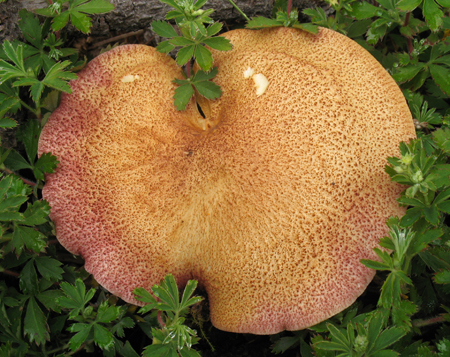 Cap: 3-8 cm in diameter, obtuse with an incurved often ribbed margin, expanding to campanulate and nearly flat in maturity, usually retaining a low obtuse umbo; surface dry and tomentose-squamulose, the squamules bright purplish red, at times appearing to be covered by a closely matted purplish-red tomentum and more granular-roughened than scaly; scales developing in age as the tomentose layer becomes pulled apart; a strong yellow cast finally showing beneath the fibrillose layer, or this region often yellowish where bruised; flesh thick, up to 2 cm in the umbo, about 5 mm half way to the margin, pale yellow, the odor none, the taste slightly of radish.
Gills: adnate becoming adnexed, narrow (5 mm), crowded (3-4 tiers of lamellulae), straw yellow or a deeper shade, edges crenulate.

Stem: 5-10 cm long x 8-15 mm diameter at apex (up to 25 mm at the slightly enlarged base) stuffed becoming hollow, yellowish within, the surface covered with appressed “Corinthian red” fibrils with a paler zone at apex, staining yellow where handled.
Spore print: white.
Spores: ellipsoid to drop-shaped, smooth, nonamyloid, 5-6 x 3.5-4.5 um.
Taste:
Odor: farinaceous. An in-depth analysis of the various volatile and semivolatile compounds responsible for the aroma of this species is presented in De Pinho et al., (2008).
Edibility: edible, or inedible depending on your taste and who you listen to. Not recommended by several authors.
Habitat: found fruiting solitry or clustered on conifer stumps, logs, and wood chips.
Distribution: T. rutilans has a widespread distribution, especially in Northern temperate regions.

The sum of the carboxylic acids assayed in T. rutilans (specifically: oxalic, aconitric, citric, ketoglutaric, malic and quinic, ascorbic, succinic, shikimic and fumaric acids) was approximately 40 g/kg dried mushroom. This species contains malic and quinic acids as the major compounds (approximately 52% of nonaromatic acids), followed by citric acid (19% of nonaromatic compounds). Variations in geographical location and maturity of the collected specimens resulted in some variability in results (Ribeiro et al., 2006).

The highly oxygenated phenol fomecin B (shown below) has been isolated from T. rutilans. Fomecin B is cytotoxic against HeLa, MDCK, and FL cells with IC50 values of 20, 14, and 17 μg/mL, respectively (Liberra et al., 1995).

Polysaccharides extracted from the mycelial culture of T. rutilans and administered intraperitoneally into white mice at a dosage of 300 mg/kg inhibited the growth of both Sarcoma 180 and Ehrlich solid cancers by 60% (Ohtsuka et al., 1973).

T. rutilans has been studied for its influence on the binding of lipopolysaccharides to CD14+ cells and on the release of inflammatory mediators (Koch et al., 1998, 2002). Ethanol extracts were shown to reduce the binding of LPS and the release of mediators, as well as decrease the LPS-induced release of IL-1 and TNF-αin a concentration dependent manner.

Koch J, Witt S, Liberra K, Lindequist U.
The influence of extracts of Tricholomopsis rutilans (schff.ex fr.) sing. on the binding of LPS to CD14+– cells and on the release of inflammatory mediators.
Phytother. Res. 1998 12:27-29.

Koch J, Witt S, Lindequist U.
The influence of selected higher Basidiomycetes on the binding of lipopolysaccharide to CD14+ cells and on the release of cytokines.
Int J Medicin Mushr. 2002 4(3):229-235.