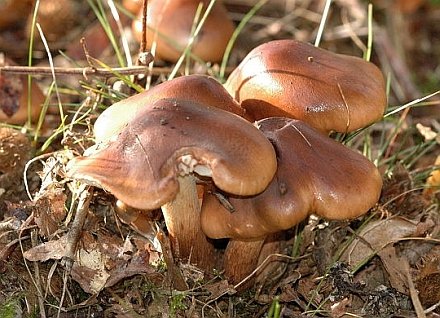 Stem: with red-brown fibrils, at apex whitish, surface dry, finely fibrillose, without ring zone; 50-80 x 10-15 mm, equal, often lower part enlarged and rooting; stiff, elastic, with age hollow; flesh white, cream-coloured, turns brown when injured, at the base of the stipe red-brown.
Spores: hyaline, ovoid or ellipsoid, 6-7.5 x 5-6 µm.
Spore print: white.
Taste: mild or slightly farinaceous.
Odor: odorless or weakly farinaceous.
Habitat: in hardwood forests, primarily under Fagus, solitary to gregarious, often almost clustered; widespread; summer-fall.
Edibility: edible or inedible, depending on the source. A Turkish study on protein content listed the species as edible (Yildiz et al., 2005), while a study on poisonous mushrooms and their biochemical effects in mice lists it as causing gastrointestinal irritation (Yamaura, 1988). In Vilna, Alberta (Canada), there is a 20-foot high replica sculpture of this species (incorrectly named on the website as Tricholoma uspale), and it is claimed that this species “is often used dried or cooked as a traditional ingredient in the ethnic (Ukrainian) dishes of the region.” Japanese researchers (Sano et al., 2002) have isolated and characterized the fungal toxin as ustalic acid (shown below). They write that T. ustale is one of the three mushrooms responsible for most cases of poisoning in Japan. Recently, a method has been published to rapidly (1.5 hours) identify this species (using fresh or cooked specimens) with real-time PCR (Maeta et al., 2008).

Polysaccharides extracted from the mycelial culture of T. ustale and administered intraperitoneally into white mice at a dosage of 300 mg/kg inhibited the growth of Sarcoma 180 and Ehrlich solid cancers by 90% (Ohtsuka et al., 1973).

Yamaura Y.
Classification of poisonous mushrooms according to their biochemical effects in mice.
Japanese Journal of Hygiene. 1988 43(2):669-78.