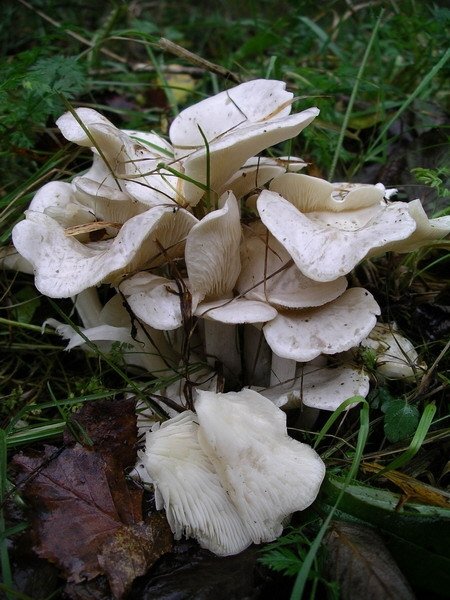 Cap: 3-9 cm diameter, initially capitate–globose, later convex to applanate with an involute margin; margin mostly repand to irregularly undulate and partly also crenate; white, when moist also with a lead-grey tinge; surface floccose and in places with a varnish-like sheen, in part also with grey-white spots where the pruina is absent; when dry dull, when soaked transparent; sometimes slightly umbonate.
Stem: 4-10 x 0.8-2 x 0.5-1 cm, laterally flattened, grooved on the flattened sides; swollen towards base, curved, white, upper region is pruinose, towards the base indistinctly pruinose like the surface of the cap; sometimes several stems are joined together at the base, making them densely fasciculate; flesh white, thin in the cap (2-3 mm) and with a central hollow in the stem.
Gills: adnate to decurrent, with intercalated lamellulae, fairly crowded, 7-8 mm broad; white with a tinge of grey.

Spore print: white.
Spores: ellipsoid, hyaline, smooth, with droplets, 6-7 x 3-4 µm.
Taste: mild.
Odor: mealy.
Edibility: listed by many guidebooks as edible. However, some of the bioactive nitrogen compounds mentioned below have suspect toxicology, because the parent compound N-hydroxyurea is a mutagen and DNA synthesis inhibitor (Fugmann and Steglich 1984).
Habitat: densely fasciculate to gregarious, grows on ground, often along roads and paths on freshly turned soil; autumn, common.
Chemical tests: stains violet after exposure to iron salts (FeCl3 or FeSO4).

A variety of bioactive components have been reported from the methanolic extract of fresh fruit bodies of L. connatum, including N-hydroxy-N‘,N‘-dimethylurea (yield 0.01-0.02%, fresh weight), the N-hydroxyamino acid chromogen connatin (Nδ-hydroxy-Nω,Nω-dimethylcitrullin, yield 0.20-0.25%), and the alkylazoxycarboxamide lyophillin (N,N-dimethylazoxycarboxamide, yield 0.04%) (Fugmann and Steglich, 1984). Lyophyllin was previously shown to be formed by oxidative condensation of N-hydroxy-N‘N‘-dimethyurea with N-methylhydroxylamine by an unspecific condensing enzyme (Ye et al., 1997).

More pictures and description at  Fungi of Poland, and Italian Wikipedia