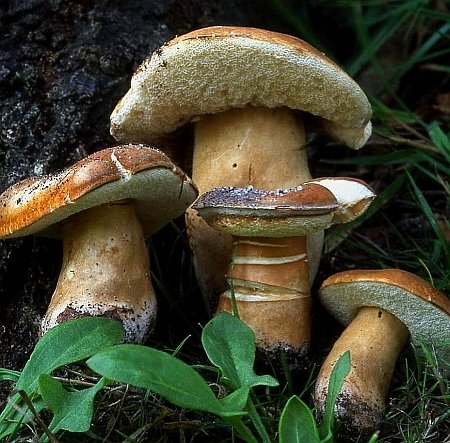 Cap: 3-7 cm diameter, convex when young, becoming broadly convex to plano-convex to plane or depressed in age; surface dry, glabrous to finely tomentose to pulverulent, often rimose with age, colored brown to tan to pinkish brown; margin entire, but becoming rimose or split, involute, becoming inflexed or flared. Context: 5-7 mm thick, white, unchanging when exposed.
Tubes: 3-6 mm deep, 1-3 per mm, shallow to deeply and broadly depressed around the stem, white when young, becoming yellow at maturity, unchanging or darkening slightly when bruised; pores one to two per millimeter, angular, radially elongate near stem apex, concolorous with tubes.
Stem: 2-4 cm long, 0.5-2 cm thick at the apex, equal to tapering toward the apex, hollow in basal portion; surface dry, unpolished, glabrous to tomentose to velutinous, colored similarly to the cap-tan to brown to pinkish brown; context white, unchanging.
Odor: not distinctive.
Taste: mild, slightly acidic.
Spore print: yellow.
Spores: ellipsoid, hyaline to pale yellow in KOH, ochraceous in Melzer’s, nonamyloid, smooth, thin-walled, 8-12 X 5-6 µm.
Edibility: edible and choice.
Habitat: solitary or gregarious under oaks in other hardwoods, during rainy periods in the summer and early fall. According to Arora (1986, pg. 510), it is common in Europe and eastern (but not western) North America.

The in vitro fruit-body production of the strain Bo1, a morphologically similar species to G. castaneus, has been reported (Ohta and Fujiwara, 2003).

The organic acids composition in the chestnut bolete has been determined to be ~5 g/kg, comprised predominantly of malic acid (74%) and citric plus ketoglutaric acids (24% and 1%, respectively) (Valentao et al., 2005).

Polysaccharides extracted from the mycelial culture of G. castaneus and administered intraperitoneally into white mice at a dosage of 300 mg/kg inhibited the growth of Sarcoma 180 and Ehrlich solid cancers by 80% and 70%, respectively (Ohtsuka et al., 1973).