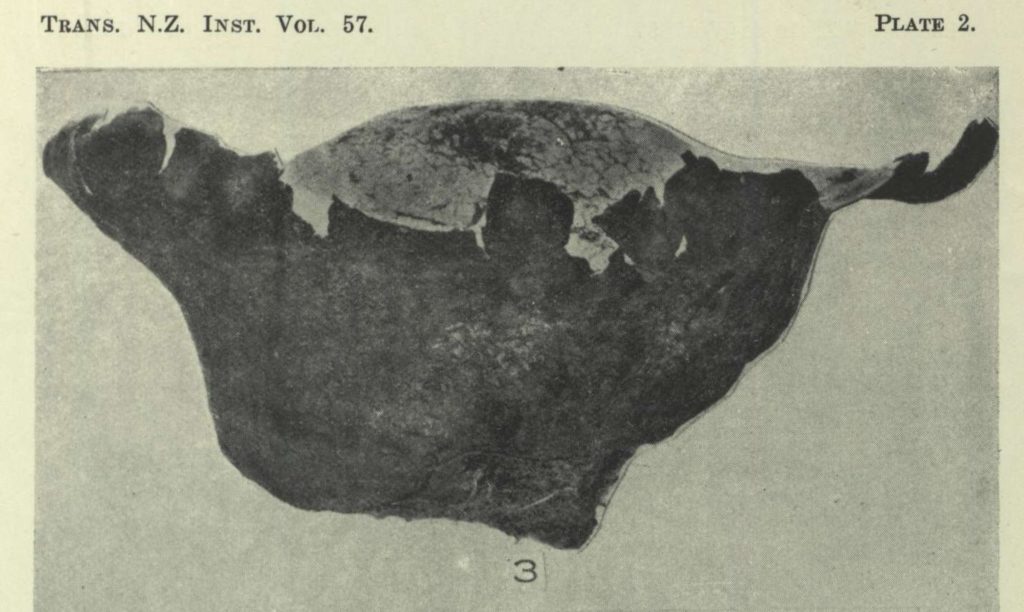 Sterile base; note the conspicuous diaphragm

“Peridium up to 15 cm. diam., subglobose or pyriform, tapering abruptly into a large, well-developed, strongly crenulate rooting base; exoperidium smooth or more frequently floccose, often areolate, cream to bay brown, thin, fragile, fugacious; endoperidium brown, thin, fragile, breaking away irregularly from the apical portion; sterile base well developed, persistent, cellular at the periphery, hemicompact within, separated from the gleba by a prominent diaphragm.

Characterized by the prominent sterile base, conspicuous diaphragm, and especially by the strongly verrucose, violaceous spores. The peridium and gleba are fragile, consequently the sterile base is often the only portion of the plant collected; nevertheless even this can be determined readily owing to its structure. It is liable to confusion only with that of C. caelata, but may be separated by its peculiar, partly compact, partly cellular structure.

The peridium is usually stated to be smooth externally, but this is by no means a constant feature; on the contrary, collections frequently show the exterior to be floccose and even areolate.”
(Cunningham, 1925)

The structure of an antibacterial and antifungal compound isolated from the culture broth of Calvatia lilacina has been described on the basis of chemical and spectroscopic studies as p-carboxyphenylazoxycyanide (calvatic acid) (Gasco et al., 1974). The antimicrobial activity spectra of this compound was reported by Umezawa et al., (1975), who isolated the compound from a closely related species, Calvatia craniformis. Calvatic acid (see structure below) inhibited the growth of Gram-positive bacteria (3.12-6.25 µg/ml) and some Gram-negative bacteria, while showing no activity against yeasts and fungi at 100 µg/ml.

The exact stereoisomerism and position of the oxygen atom in the azoxycyano group were later confirmed by X-ray cystallography (Viterbo et al., 1975). A research group led by Gasco developed a synthetic route for making calvatic acid and also studied both the antimicrobial and antimitotic activities of several chemical analogues of this compound (Calvino et al., 1986).