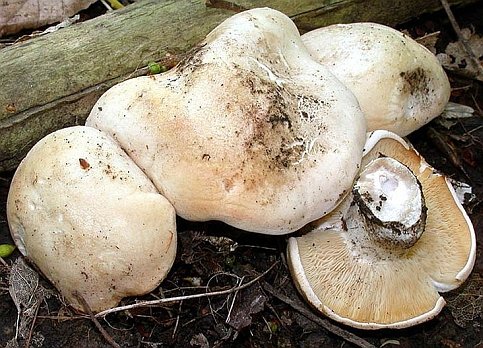 St. George’s mushroom
See this link for an impressive list of common names in various languages.

Cap: at first whitish-cream, when old it turns orange-yellow to yellowish-brown; smooth, bare and dry. The cap of the young mushroom is a rounded cone or bell shape; later it becomes convex and when old planar;  5–15 cm in diameter.
Gills: initially white to cream; then pale orange-yellow; 5-10 mm wide, crowded, narrow, almost always notched where they join the stipe. The margin of the gills later becomes toothed and torn.
Stem: first club-shaped, then cylindrical; 4-8 cm long, 1.5-3.0 cm thick, whitish or pale cream; its base is usually orange-yellow or rust. Its surface is streaked with fibers; immediately under the cap the stipe may be slightly scaly.
Flesh: white, firm, does not change its color when cut, tastes pleasant and smells like freshly ground flour.
Smell: mealy.
Spore deposit: white.
Spores: 5–7 x 3–4 µm, hyaline, ovoid or compact ellipse; smooth; colorless.
Habitat: grows from the end of April to the beginning of June, especially in meadows, pastures, on the edges of deciduous woods. In mountain regions with harsher climates it arrives later, from the beginning of June to the first half of July. It can be found alone or in small clumps, also in circles.

The English common name refers to the fact that these mushrooms usually appear around the Saint’s day of April 23rd, although it frequently matures around a week later.

A dichloromethane extract of Calocybe gambosa was shown to be antibacterial towards Bacillus subtilis and Escherichia coli (Keller et al., 2002).

The title of the Brachvogel reference (1986) suggests that the St. George’s mushroom has the ability to reduce blood sugar levels, but I haven’t yet seen this German paper.

Clemencon, H.
Phenoxazones in cultures of species of Calocybe agaricales.
Proceedings of the International Botanical Congress. 1981 13:160.