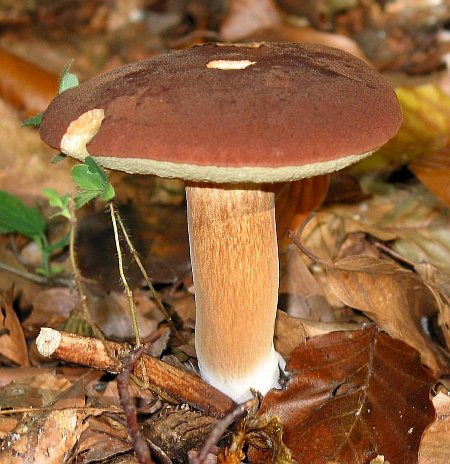 L-theanine (N-ethyl-γ-glutamine or γ-glutamylethylamide, shown below) is a non-protein forming amino acid that occurs in the bay bolete (Casimir et al., 1960).

A number of studies have recently investigated the physiological and pharmacological potential of this rare amino acid, associated most commonly with tea leaves (Camellia sinensis). These studies suggest that theanine may be useful for the following:

A Chinese study has demonstrated a promising method for producing theanine by using submerged fermentation of B. badius mycelium and response surface methodology (Li et al., 2008).

Polysaccharides extracted from the mycelial culture of B. badius and administered intraperitoneally into white mice at a dosage of 300 mg/kg inhibited the growth of Sarcoma 180 and Ehrlich solid cancers by 60% and 70%, respectively (Ohtsuka et al., 1973).