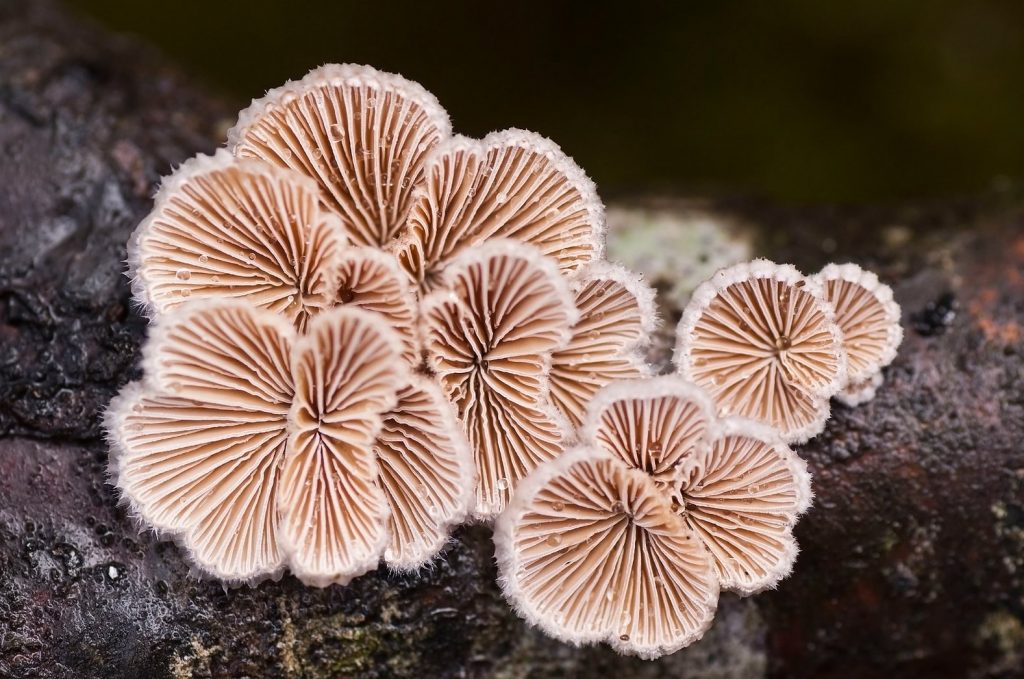 Schizophyllum commune, often called the split-gill mushroom, is, to put it mildly, odd.

Most disturbing is its ability to grow in or on people. There is even at least one documented case of it fruiting from a living person’s body[i]. S. commune is hardly alone in attacking people—there are many pathogenic fungi, and in fact this species isn’t very good at attacking us; there have only ever been a handful of documented cases of mycosis caused by S. commune, and the patients were all immunocompromised prior to infection. The odd part is that this species more commonly feeds on dead and dying hardwoods. How a species that normally eats wood also finds humans palatable is far from obvious. Or, put the mystery another way—why does it eat both hardwoods and us but not conifers?

It’s important to remember that infection by S. commune is not really something to worry about; even among people with severely compromised immune systems, the infection is very, very rare.

And humans can exact revenge; just as it can eat us, we can eat it, though many of us don’t want to (reportedly, S. commune is very tough)[ii]. There is also some evidence that S. commune may have medicinal potential, meaning it can both cause disease and treat it[iii].

There are two more aspects of oddness.

Most fungi thought to grow all over the world actually don’t. The fruiting bodies may look the same, but microscopic details, mating studies, or genetic testing show that what was thought to be one species is actually a group of look-alikes. Not so with S. commune. Samples of the fungus taken from all over the world, from all six continents where this mushroom is found, were all able to mate with each other. S. commune is, indeed, a single species.

But that same study also revealed something else that is intriguingly odd; this species has over 28,000 different sexes[iv].

Sexual reproduction in fungi differs from the more familiar kind in several respects. Only two of those differences concern us here. First, although one might assume that since mushrooms produce spores, they must also be involved in fungal sex—but they aren’t. Instead, when hyphae from two different mycelia meet, they can join, and their baby grows out from that point. It is the baby who eventually produces mushrooms.

Second, unlike animals, where males and females differ in shape, fungi of different sexes differ only genetically. To be of different sexes, for fungi, means only being genetically compatible for mating. A fungus cannot have a child with itself or with another of its own sex. So while some fungal species do have only two sexes, slight genetic changes can easily produce extra sexes. The more sexes there are, the more likely a fungus is to meet suitable sexual partners. Many species have four or five sexes. S. commune has over 28,000. It’s not the only species with that many, but it is the one most commonly studied[v].

Cap: Small, whitish, grayish, or brownish, often hairy or fuzzy above but sometimes grainy. If attached at the side, the cap is fan-shaped. If attached at the center (either on the under-surface or on the upper-surface), the cap is circular or irregular. The cap as a whole is dry, with tough, white interior flesh that does not change color when cut open.
Gills: There are no true gills, but the spore-producing surface is wrinkled in a way that suggests gills. These “gills,” then, branch into fan-shapes. They are also paired. The spore surface is whitish or grayish.
Stem: There is no stem.
Smell: Nothing distinctive for identification.
Taste: Nothing distinctive for identification.
Spores: Not but almost quite ellipsoid. Smooth.
Spore color: White.
Edibility: Edible, but opinions as to palatablility vary widely.
Habitat: Eats dead, or sometimes weakened, wood. Can fruit singly, but more often fruits in groups.

The paired wrinkles look like gills split along the middle and are a very distinctive feature of the genus; the name, Schizophyllum, means “split-leaf.” There are other Schizophyllum species, though none are as wide-spread. These paired wrinkles close together when the mushroom dries, but swell open again when moistened. Thanks to these protective wrinkles, the fruiting body can survive dry periods and go on producing spores, off and on, all year[vii].  Fruiting bodies do not persist longer than a year, however. The fungus fruits again every year.

Many small, dry, light-colored shelf fungi, could be mistaken for S. commune at first glance, but most of these have either pores or teeth. There are a few closer look-alikes, such as the crimped gill (Plicaturpsis crispa), though none are quite as widespread. P. crispa occurs in North America and Europe only, is reddish or yellowish, and its vein-like gills have a notably different structure[viii].

In general, the “gills” of S. commune are very distinctive.

There are five other Schizophyllum species that share the same “gill” structure, though they may differ in color and other details. None are anywhere near as widespread, however.

An extract of S. commune has shown some effectiveness against cancer in a variety of studies, including some preliminary human studies, and the extract is being used in conjunction with other cancer treatments in some countries[ix]. However, there is a lot that is not yet known about the safety and effectiveness of the extract, nor is it clear whether other products made from the same species might also be effective.

An extract of S. commune has shown promise for use as an insecticide[xi].

The species has also been the subject of much research on sexual reproduction in fungi.

People interested in trying S. commune products medicinally should consult an experienced health practitioner. No one should attempt to self-treat cancer without expert medical advice in any case.

While S. commune has caused serious disease by growing on or in people, it is not a danger to those who are not immunocompromised. Even among immunocompromised people, risk of infestation is low.