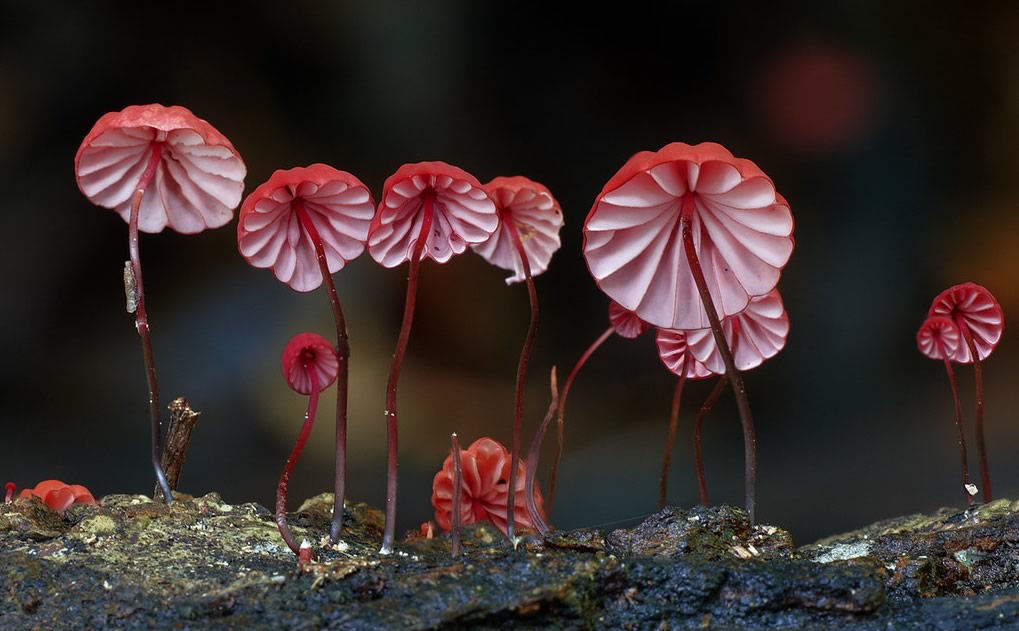 Marasmius haematocephalus is a commonly reported pan-tropical and subtropical species of mushroom belonging to the family of Marasmiaceae. The species of these tough, little saprobic mushrooms are often found in the litter layer of the forest and are known for their ability to shrivel up during dry conditions and wait for rainy weather during which they will rehydrate and spring back to life. Hence the name ‘marcescence”,  the mycological term for reviving ability. [i]

The prolific German mycologist Rolf Singer in his 1976 book on Marasmieae (Basidiomycetes-Tricholomataceae) recognized nine distinct varieties of M. haematocephalus, distinguished mainly by the pigmentation of their caps. Although these special forms, formae speciales ff. spp., are macro-morphologically distinct from each other, modern mycological studies such as “A Monograph of Marasmius (Basidiomycota) from Northern Thailand based on morphological and molecular (ITS sequences) data” have shown that they are micro-morphologically indistinguishable.[ii]

Marasmius haematocephalus is characterized by a small bluntly conical to convex, distinguishing dark violaceous or deep-red cap and distant, violaceous lamellae; large reproductive basidiospores, distinct pleurocystidia, and by the absence of caulocystidia.

Cap: The cap is 4 to 10mm in diameter. Bluntly conical when young, becoming convex to campanulate with or without an umbo with age. In color, the cap is deep reddish-brown to maroon, with grayish red to violet-brown margins. Surface pruinose and striate to sulcate.
Pileipellis: Pileipellis is hymeniform, mottled, and composed of Siccus-type broom-cell. The body of these cells are 6-20 by 5-12µm in size, clavate or broadly clavate or pyriform, typically without branching, hyaline, inamyloid; and thin- or thick-walled. Broom cells also have apical projections 3-5.5 by 1-1.6µm in size; cylindrical, subacute, brown to dark brown, and thick-walled.
Gills: Adnexed and distant (9-14) with occasional lamellulae. The gills are pale pink with a finely colored margin same as the cap.
Stem: The stem is thin cylindrical, wiry, hollow, and 30-50 by <0.5mm in dimensions. Dark brown to purplish-black at the base, turning violet to light purple at the apex. The texture of the stem is smooth.
Basidiospores: Basidiospores are 17-18.5 by 2.5-5.0µm in size, clavate to narrowly fused, often curved in profile, smooth, hyaline, inamyloid, and thin-walled.
Basidia: Mostly 4 spored, occasionally 2 spored. Cylindrical to clavate, 23-25 by 5-6µm in dimensions.
Pleurocystidia: Quite large and numerous, 32-54 by 6-12 µm in dimensions. Clavate to fusoid, usually attenuated and strangulate at the apex, sometimes with two successive apical constrictions; hyaline, inamyloid, and thin-walled.
Cheilocystidia:  Made of two cell types. The first type, Siccus-type broom-cells, 8-20 by 5-11 µm, clavate to cylindrical, often branched, hyaline, inamyloid, thin-walled; with cylindrical, subacute, yellow to light brown, thin- to thick-walled apical projections(setulae) up to 4-5 to 1µm in size. The second type, cells without apical projections resembling pleurocystidia, 25-41 by 7-12µm, fusoid, most commonly attenuated and strangulated at the apex with 2-4 successive constriction; hyaline, inamyloid, and thin-walled.
Caulocystidia: Characteristically absent.
Spore Print: The spore print of Marasmius haematocephalus is characteristically whitish to ochraceous.
Smell: Non-distinct smell
Flavor and Edibility: Not considered edible.
Habitat: Marasmius haematocephalus plays an essential saprobic role by breaking down the leaf litter layer of the forest floor. Therefore, it is most commonly found growing scattered or gregarious  on dead fallen leaves and dead twigs.
Range: Found throughout the world in regenerating subtropical rainforests of USA, Central and South America, Asia, New Zealand, Papua new Guinea, Java, Malaysia, Sri Lanka, and Thailand. It has also been found in on the African continent in countries such as Cameroon, Democratic Republic of Congo, Gabon, Ghana, Ivory Coast, Kenya, Nigeria, Republic of the Congo, Sierra Leone, Tanzania, Uganda, and Zimbabwe.

Below is offered a basic key for the identification of four formae speciales of M. haematocephalus.[v]

Marasmius haematocephalus (Mont.) Fr. f. sp. haematocephalus is a rather inconspicuous mushroom that is not consumed or normally confused for other edible mushrooms. Therefore, no issues regarding toxicity or safety of this mushroom are reported in mycological literature.