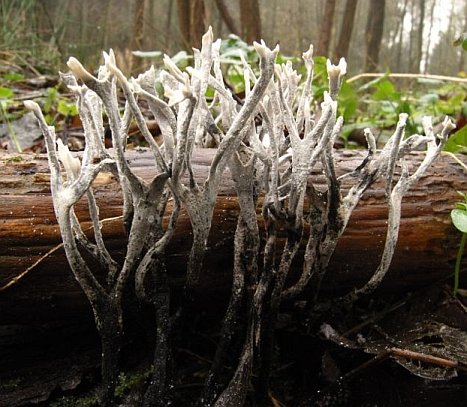 Fruiting body: erect, tough, rubbery, club-shaped (clavaroid) in shape, usually branched near the top, up to 6 cm high by 3-5 mm wide, often flattened in cross section above, rounded below; the base dark brown to black, often tomentose, branch tips white from asexual spores (conidia) or the same color throughout as the base and minutely pimpled with perithecial pores.
Spores: ascospores are 10-14 X 4-6 µm, black, smooth, bean-shaped. Asexual spores hyaline, smooth, elliptical to elongated.
Habitat: Scattered to gregarious to clustered on rotting wood.
Chemical test: the asci tips stain blue with Melzer’s reagent.

When found in spring, these interesting saprobes are sometime dusted with ascospores, which may look like whitish-grey powder. A jolt will release these spores, to be carried away by air currents – hence the common name candlesnuff fungus.

Cytochalasins are organic molecules that bind to actin, a protein component of muscle tissue. Six new cytochalasins (shown below) together with the previously known compounds cytochalasins Q, 19,20-epoxy Q and R were isolated from the fermentation broth of Xylaria hypoxylon  (Espada et al., 1997).

Two new α-pyrone derivatives, xylarone and 8,9-dehydroxylarone, possessing cytotoxic activities, were isolated from the culture fluid of submerged cultures of Xylaria hypoxylon. The cytotoxic activities of these compounds were also tested in vitro (Schuffler et al., 2007).

The compound 19(βH), 20(αH)-epoxycytochalasin D (shown above) demonstrated potent cytotoxic activity against tumor cell line P-388 (Shi and Zhan, 2007). Additionally, a xylose-specific lectin isolated from the candlesnuff fungus showed antiproliferative and antitumor properties. This 28.8 kDa lectin has little amino acid sequence similarity to lectins from other ascomycete mushroom species such as Aspergillus oryzae or Aleuria aurantia. It also has unique carbohydrate-binding specificities, with a potent FeCl3 concentration-dependent hemagglutination property that was inhibited by xylose and inulin. The lectin’s antiproliferative properties towards tumor cell lines M1 and HepG2 was potent, with an IC50 <1µM (Liu et al., 2006).

The exotic look of this species make it a popular subject for nature photographers, and there are quite a few nice examples that can be found on the internet.  I’ll just point to a few galleries I found: