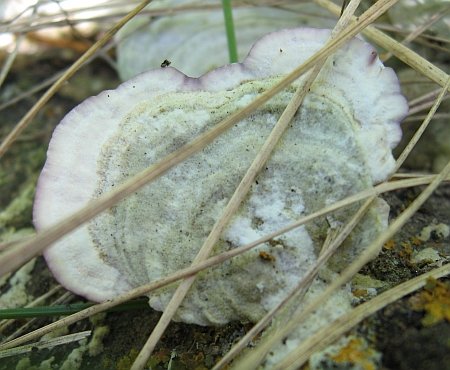 Molecular phylogeny analyses based on nuclear ribosomal DNA sequences of various European Trametes suggests that T. gibbosa may be more appropriately placed in the genus Lenzites (Tomsovsky et al., 2006). Until that change is made official, I’ll call it Trametes.

Spores: hyaline, smooth, cylindrical or allantoid, nonamyloid, 4-5.5 x 2-2.5 µm.
Taste and odor: not distinctive.
Habitat: saprophytic on trunks and stems of deciduous trees, especially ash, beech, poplar, and maple; causes white-rot.
Distribution: According to Kout and Vlasák (2007), it is common in Europe and Asia, but prior to their publication, not previously reported in North America; this may be due to confusion with the similar species Lenzites elegans. Their mating compatibility studies of European and North American specimens suggests it was recently introduced to North America, possible as an invasive species. It is not uncommon in northern Saskatchewan, my usual mushroom hunting grounds.

Research has shown that polysaccharides isolated from the fruit bodies of T. gibbosa have the ability to confer a protective effect to rat blood vessels in the carrageenan assay, suggesting their possible use in pathological disease conditions leading to endothelial damage (Czarnecki and Grzybek, 1995). Carrageenans are a family of linear sulphated polysaccharides from seaweed that, when injected into the pleural cavity of various animals, cause an inflammatory reaction. The study demonstrated that intravenous administration of T. gibbosa polysaccharides neutralized changes in blood vessel permeability, decreased total protein levels in the pleural effusion, increased the number of neutrophils and eosinophils while reducing the number of lymphocytes in the surrounding blood.

Polysaccharides extracted from the mycelial culture of T. gibbosa and administered intraperitoneally into white mice at a dosage of 300 mg/kg inhibited the growth of Sarcoma 180 and Ehrlich solid cancers by 80% and 90%, respectively (Ohtsuka et al., 1973).

Recently, it was shown that organic extracts of T. gibbosum (as Daedalea gibbosa) mycelium are effective in inhibiting the growth of K562 cells, a laboratory model of human chronic myelogenous leukemia (Yassin et al., 2008).