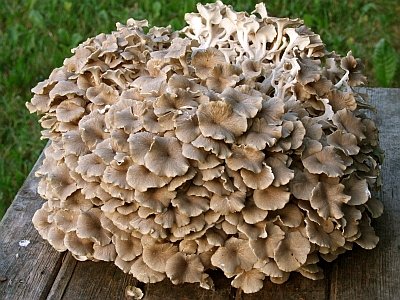 The common name Zhuling refers to the sclerotium of the mushroom, while Chorei is the fruiting body.

Polyporus umbellatus is a saprophytic mushroom that grows on withered beech and maple trees roots. Its sclerotium, called Zhuling, is a crude drug commonly used for urological disorders in Chinese medicine because of its diuretic effect (i.e. promoting urination).  A number of studies have shown that P. umbellatus has a variety of medicinal properties, which are summarized below.

Polysaccharides extracted from the mycelial culture of P. umbellatus and administered intraperitoneally into white mice at a dosage of 300 mg/kg inhibited the growth of Sarcoma 180 and Ehrlich solid cancers by 70% and 80%, respectively (Ohtsuka et al., 1973).

P. umbellatus was later reported to have antitumor effects in a Japanese study (Ito et al., 1976).

From the crude drug Chorei, seven components named polyporusterone A, B, C, D, E, F and G, have been isolated. These compounds were cytotoxic to leukemia cells (Ohsawa et al., 1992).

When combined with the chemotherapeutic agent mitomycin C, Zhuling was shown to increase the lifespan of mice with tumors (You et al., 1994).

Zhuling was also shown to be useful in reducing the postoperative recurrence rate of bladder cancer. Recurrence rates were 34.9%, compared to 41.7% in the mitomycin C group, and 64.7% in the control group (Yang et al., 1999). Similar results were reported in Yang et al. (1994) and Yang (1991).
P. umbellatus polysaccharides can offset the immunosuppression of the supernatant from S180 cell culture, which may be mediated by down-regulating the synthesis and/or secretion of immunosuppressive substance by S180 cells (Yang et al., 2004).

Ergone (ergosta-4,6,8(14),22-tetraen-3-one), an ergosterol derivative isolated from an alcohol extract of P. umbellatus, was shown to be effective in killing various human cancer cell lines. The cytotoxic effects were greatest against the cervical and gastric carcinoma cell lines, but less so against colon and stomach cancer (Lee et al., 2005).

Cachexia, characterized by loss of weight, muscle atrophy, fatigue, weakness and loss of , is a common condition arising in many human cancer patients, especially those with gastrointestinal or lung cancer. Cachexia is thought to be the most frequent cause of eventual death in such patients. The tumor secretes a compound that breaks down fatty acid tissue in the host, and uses these breakdown products to help grow new cancerous cells. One of these compounds, toxohormone-L, is a protein that also suppresses food and water intake, promoting anorexia in these patients. P. umbellatus polysaccharides were shown to inhibit the cachexia induced by toxohormone-L (Wu et al., 1997).

Zhuling was originally described in Shen Nong Ben Cao Jing (The Divine Farmer’s Materia Medica Classic) as having diuretic action and was used mainly for edema and dysuria (Wang et al., 1964). Clinical studies have confirmed that Polyporus umbellatus is an effective diuretic, without side effects, for the treatment of pyelonephritis, nephritis and urologic calculi (Wang et al., 1964).

Aldosterone is a steroid hormone produced by the the adrenal gland, and it regulates sodium and potassium balance in the blood. Ergone has also been shown to have an anti-aldosteronic diuretic effect (Yuan et al., 2004).

In one study, it was demonstrated that Chuling in vitro protects red blood cells from 2,2-azo-bis(2-amidinopropane)dihydrochloride (AAPH)-induced hemolysis. The inhibitory effect was dose-dependent at concentrations of 50 to 1000 µg/ml. The main free-radical scavengers involved, the triterpene carboxylic acids isolated from the methanol extract, polyporusterone A and polyporusterone B, were found to have inhibitory activities against AAPH-induced lysis of red blood cells. The anti-hemolytic effect was significantly stronger in polyporusterone B compared with polyporusterone A. Furthermore, the ingestion of 150 mg of Chuling was associated with a significant increase in free-radical scavenging effect of plasma in rats (Sekiya et al., 2005).

P. umbellatus was shown to have mitogenic activity on murine lymphocytes in vitro (Yadomae et al., 1979).

Polyporus umbellatus polysaccharides were found to improve the cellular immunity of normal mice and the mice with liver lesions (Zhang et al., 1991).

Chuling, together with mitomycin C, was found to increase the life span of tumor-bearing mice (You et al., 1994).

A Chinese study found that P. umbellatus polysaccharides can offset the immunosuppression of the supernatant from S180 cell culture, possibly by down-regulating the synthesis and/or secretion of immunosuppressive substance by S180 cells (Yang et al., 2004).

P. umbellatus extract was shown to promote hair growth in mice, and 3,4-dihydroxybenzaldehyde was isolated as an active component (Inaoka et al., 1994). A later study isolated three hair regrowth substances, acetosyringe and polyporusterone A and B (Ishida et al., 1999). The latter two compounds have been isolated and characterized (Zheng et al., 2004).

A group of researchers evaluated various reports about the use of P. umbellatus to treat chronic hepatitis B infection, concluding that the evidence in favor is too weak to recommend using this herb, and that further properly-designed clinical studies are required (Liu et al., 2001).