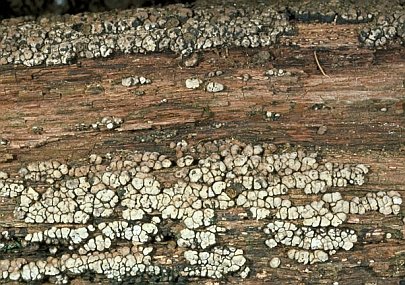 Xyobolus frustulatus causes a white pocket rot in dead oak trees. This particular delignification, where the wood is completely removed in localized pockets, is also known as partridge rot, or honeycomb rot. The fruitbodies, which are usually 0.3-2 cm wide, occur as crowded, polygonal, woody plates that resemble broken pieces of tile. The fertile surface is pinkish-buff to whitish and the outer, sterile surface is blackish. Colonies of these fungi can cover large areas of wood.

Serial dilution tests demonstrated the antibacterial activity of frustulosin against Staphylococcus aureus, Bacillus mycoides and Bacillus subtilis at a concentration of 16 µg/ml. Weak antifungal activity against several unidentified fungi was also noted, as well as weak activity against Vibrio cholerae. Frustulosinol was reported to be active against S. aureus (at 16 µg/mL) and more weakly active (64-256 µg/ml) against Mycobacterium smegmatis (Nair and Anchel, 1977).

The sesquiterpene torreyol (also known as d-cadinol or 1S-(1α,4β,4αβ,8α)]-1,2,3,4,4a,7,8,8a-octahydro-1,6-dimethyl-4- (1-methylethyl)-1-naphthalenol), has also been identified in X. frustulatus (figure 1b). Interestingly, the chemical has been found in the male wings of the northern blue butterfly, Lycaeides argyrognomon, and may act as a insect pheromone (Lundgren and Bergström, 1975).